This is Chris Roberts, a ‘Dementia Friend’, sporting his latest T-shirt. 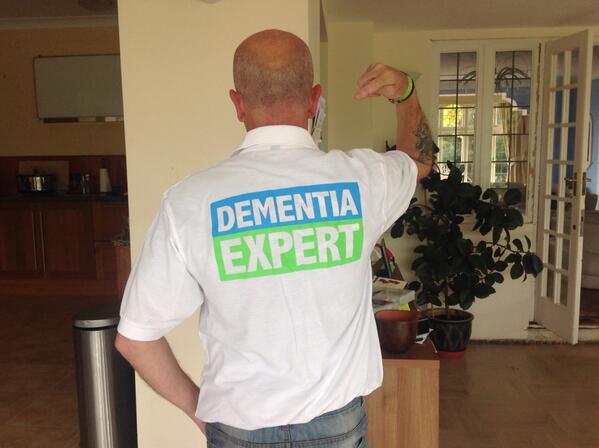 The message is though extremely compelling.

There are very few people I’ve ever met who ‘understand’ dementia. University Chairs are often very sharp political operators, whose brown nosing and networking skills are second to none. Of course not all Professors are like that.

There are also many academic authors who know how to play the system. They on the way up will write with someone well known so that they get published. This is a different version of when you tag somebody well known in your tweet in the hope that your shill can gain some momentum.

We have got to get out of the language of ‘opportunity seeking’ for dementia. You cannot measure success in dementia awareness by the number of new website domains with the bit ‘dementiaawareness’ in it.

As such you can’t sell ‘awareness’. You might be able to sell knowledge, but much of this knowledge, albeit unreviewed, is available on the world wide web. But that’s not to say there is a problem here. Most people’s basic knowledge of the dementias is poor, perpetuated by many people who should know better equating dementia with mild memory problems.

And promoting dementia awareness is not exactly equivalent to promoting a charity. To say that I have been disgusted with the naked unpleasant rivalry by some against others is an understatement. I know of one prominent person who has literally been pimping ideas and palming them off as his own. This has got to stop.

If you’re interested in being part of a network that doesn’t want anything, but wishes to spread goodwill and knowledge about dementia, please feel free to join our Facebook group.

But just because dementia awareness week ends today doesn’t mean we should park the idea til next year. Like living with any long term condition, it should be a way of life. Understanding it is part of our basic humanity, and our ability to be aware of dementia individually is a potent endophenotype of our make up as a caring society.