The literature on stigma is comprehensive.

But Kate Swaffer added to it beautifully in the journal ‘Dementia’, with an article today – on open access – entitled “Dementia: Stigma, language and dementia friendly”.

Kate refers to a blogpost by Ken Clasper, a Dementia Friends Champion, which asks, sensibly, what we are trying to achieve with more ‘awareness’. 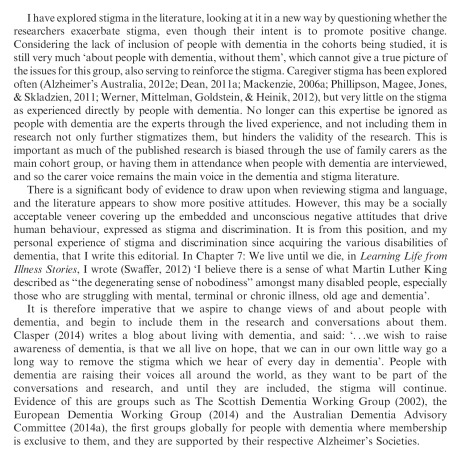 And if you scroll down to the end of this tour de force on stigma and dementia, you’ll see exactly why Kate is able to opine with such legitimacy and authority.

I conceded a long time ago – in March 2014, in fact – on this blog that the policy plank of ‘dementia friendly communities’ is an incredibly complex one.

The discussion of stigma seems to be one of perpetuity. We’ve seen numerous attempts at it, including the original work of Goffman (1963) on stigma and ‘spoiled identity’.

It’s been re-incarnated as a Royal College of Psychiatrists campaign on stigma.

This morning there was another bite of the cherry.

The report, New perspectives and approaches to understanding dementia and stigma, published by the think tank International Longevity Centre UK (ILC-UK) is produced by the MRC, Alzheimer’s Research UK, and Alzheimer’s Society; it was also supported by Pfizer.

I’ve thought how I could possibly respond to Kate. And I can’t, as Kate is in every sense of the word an ‘expert’.

But it did get me thinking.

It got me thinking of the happy times I had with Chris and Jayne last week at the Alzheimer Europe conference in the city of my birth in Glasgow.

‘There’s more to the person than the diagnosis” is one of the key five messages of ‘Dementia Friends’, an initiative from the Alzheimer’s Society predominantly (and Public Health England). This is mirrored in a tweet by Chris from this morning.

Chris is also a “Dementia Friends Champion“, and lives well with dementia.

Last week, I attended a brilliant all-day workshop chaired by Karishma Chandaria, Dementia Friendly Communities manager for the Alzheimer’s Society. The progress which has been made on this policy plank is substantial, and I am certain that the next Government will wish to support this policy initiative in the English for 2015-20. 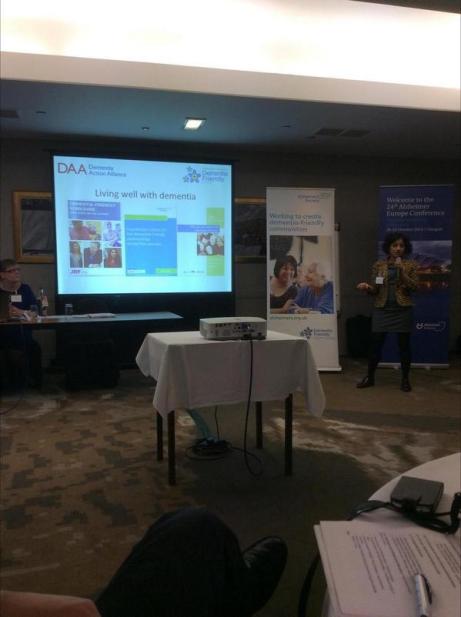 It is stated clearly in Simon Stevens’ “Five Year Plan” for NHS England. 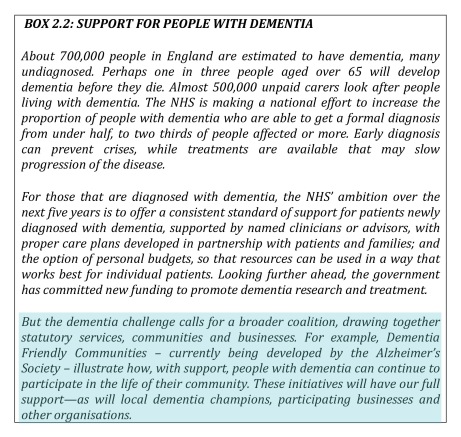 It is a core thread of the Prime Minister’s Dementia Challenge.

And the ‘coalition of the good’ has seen the dementia friendly communities policy plank develop drawing on work from ‘Innovations in dementia’ and the Joseph Rowntree Foundation.

And to give the Alzheimer’s Society credit, where it is certainly due, there has been launched an open consultation for a British Code of Practice (currently ongoing), to which anybody can contribute.

But this code of practice does, again, have the potential to be very divisive. It might be painful to make dementia friendly communities, such as the large one in Torbay, ‘fit into this box’.

Torbay in many ways is a beacon of innovation for integration between NHS and care. There is genuine “community bind”, with citizens, shopkeepers, transport, police, for example, contributing.

The article on the BBC website about Norman McNamara (January 2012) predates the Prime Minister’s Dementia Challenge, (which started in March 2012.)

Any top down way of making bottom-up social groups ‘conform’ will be hugely problematic in the implementation of this approach to dementia-friendly communities, potentially.

The methodology of dementia friendly communities has to be truly inclusive: it is all or nothing.

I agree with Kate, and like her I wish to avoid protracted circular definitions of ‘stigma’. For me, I recognise stigma when you see it, like how the Supreme Court of the US recognises erotica and pornography as per Jacobellis v Ohio [1964].

It is possibly easier to define stigma by its sequelae, such as avoiding wishing to talk about dementia in polite conversation, or not wishing to see your GP about possible symptoms of a dementia in its early stages, or not wanting to socialise with people with dementia who happen to be in your family.

We know these are real phenomena, as demonstrated, for example, by the loneliness of many people on receiving a diagnosis of possible dementia.

And we know stigma can harbour deep-seated irrational prejudice, like the incorrect notion that dementia is somehow contagious like a ‘superbug’.

Stigma can be exhibited in pretty nasty ways in language: such as “snap out of it” or “victim”.

My discussion of whether people living with dementia are ‘sufferers’  tends to go round and round in circles with people who disagree with me.

Suffice to say, I agree it is possible for a person living with dementia, such as a person who has received a diagnosis of Lewy body dementia and who has to put up with terrible “night terrors” and exhaustion the following day.

I think if you live independently, but with full insight into your symptoms, it can be exasperating. I have never been in that position though, and it would be invidious of me to second-guess.

I think if you are close to someone in the latter stages of dementia, you can suffer.

But I’ve written about this all, indeed on this blog, before here.

The only thing that is new is Peanuts’ cartoon (original citation here). 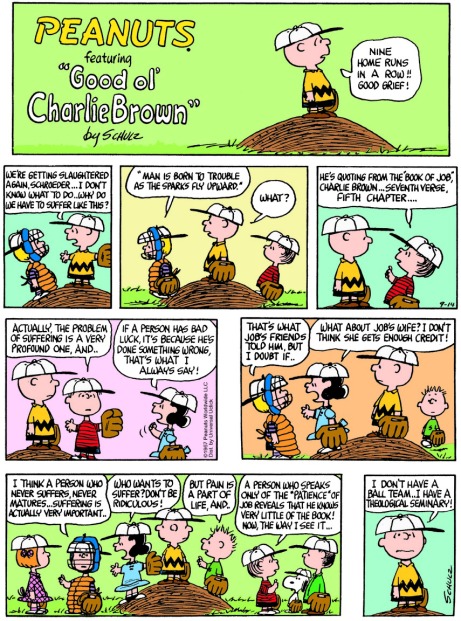 In that workshop, I also sat through Joy and Tone Watson’s brilliant “Dementia Friends” session. Joy lives with dementia. And their session was brilliant.

This was the final ‘exhibit’. 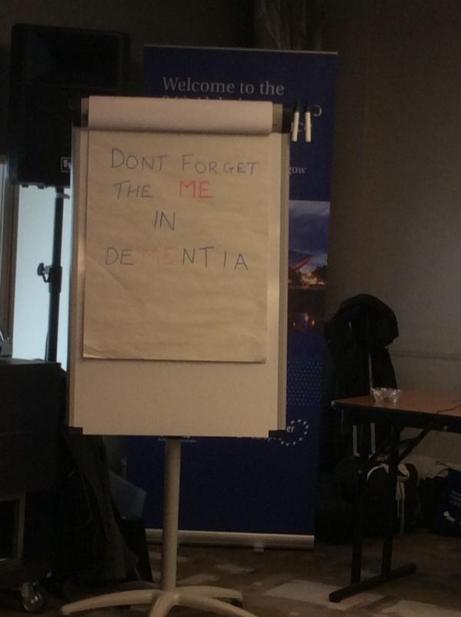 I attended a special group session on stigma with Toby Williamson from the Mental Health Foundation during that day. In that session, it was mentioned that ‘rôle models’ of people living well with dementia might help to break down stigma.

Or maybe guidance for the media might help? One cannot help wondering if an article such as in the Daily Mail today might actually put off people from seeking a diagnosis of dementia (completely unintentionally).

But I did bring up something on my mind.

But dementia can be, like other disabilities, quite invisible.

Somebody might have insidious change in personality and behaviour, noticed by somebody closest to him or her, with no obvious changes in cognition (nor indeed in investigations).

I showed this in my paper published in Brain in 1999, currently also in the Oxford Textbook of Medicine.

The condition I refer to is in fact one of the more prevalent causes of dementia in the younger age group, called the “behavioural variant of frontotemporal dementia“.

If the signs are ‘visible’, then you are obliged legally to make reasonable adjustments for any disability. In England, this includes dementia under the guidance to the Equality Act (2010).

As Toby Williamson says, if you’re obliged to build a ramp for somebody in a wheelchair for a place of work, there’s an equal obligation to produce adequate signage for people who have navigation problems as a result of a dementia such as dementia of the Alzheimer’s type.

There are reams and reams of evidence on equality and the built environment (for example the Design Council or Commission for Architecture and the Built Environment).

I personally think it’s brilliant you can go into certain shops, and the customer-facing staff will, potentially, be able to recognise if a person does need time and space to pay for items.

This is also been tackled in the Scottish jurisdiction through Alzheimer Scotland.

Also, corporate lawyers should be advising large employers about the scope for unfair dismissal claims by people dismissed as they are about to arrive at a diagnosis of dementia (particularly young onset dementia).

The timeline is roughly this. Somebody has health problems – he or she is invited to leave and given a pay off – these health problems turn out to be a diagnosis of probable dementia – by this time the dismissal is not unfair.

I feel confident the ‘dementia friendly communities’ policy strand in England, and across other jurisdictions, is here to stay. I share, though, Kate’s concerns that about the relative ease with which this policy has lifted off, say, compared to how one might feel about ‘gay friendly communities’ or ‘black friendly communities’. One has to be extremely careful about any policy plank which alerts people to divisions, “them against us”.

This policy, anyway, currently has huge momentum. Marc Wortmann is  currently Executive Director of Alzheimer’s Disease International (ADI), the organisation providing a global voice for dementia and the founder of World Alzheimer’s Month. Wortmann has been instrumental in propelling dementia friendly communities to the foreground of world policy.

But, in firing up ‘dementia friendly communities’ (a term which I think is sub-optimal’), v 2.0, there is plenty of time to get it right.