]Is there or is there not an ‘epidemic’ of dementia?

Last week’s study published in the Lancet was focused on Western Europe. There, to assess whether dementia occurrence has changed during the past 20–30 years, investigators of five different studies done in western Europe (Sweden [Stockholm and Gothenburg], the Netherlands [Rotterdam], the UK [England], and Spain [Zaragoza]) have compared dementia occurrence using consistent research methods between two timepoints in well-defined geographical areas.

But we have a new update, as of midnight last night.

Put simply, the second study has a much bigger spread, including those countries where prevalence is likely to be going up, not ‘stabilising’.

But before I go on, I’d like  to say something important

– that ADI have made it very easy for us to access their data this time around. There’s a special website with the report, implications for various stakeholders, infographics showing key statistics about dementia, and the ADI/BUPA Global Charter “I can live well with dementia“.

There are two big issues with measuring the prevalence of dementia in a particular country.

Firstly, the prevalence of that particular country is likely to be affected by the ‘ethnic mix’, and habits in smoking, exercise, or diet; access to healthcare including blood pressure control; and the such like.

And secondly, how you get to know whether someone’s got dementia at all will inevitably affect your ‘detection of dementia’ statistic. There are various ways of defining whether someone has dementia, and the Report alludes to the new kid block on the measurement block, DSM-5, which looks at some form of abnormal cognitive impairment. The authors of the Alzheimer’s Disease International in their desktop review of all suitable studies have tried to reach a consensus on those that they’ve included. It’s particularly interesting here what the best way of making that diagnosis might be, e.g. neuroimaging, neuropsychology, genetics, CSF; but you get the impression the authors aren’t that picky.

The fact that the authors have excluded all studies with young onset dementia persons only means, potentially, we’re not really getting a good picture of the young dementia prevalence worldwide.

This is particularly shocking if we want to be able to make some policy recommendations about employment and workforce engagement of people below the age of 65 who receive a diagnosis of dementia while at work (and possibly with a young family).

And the 2015 World Alzheimer Report does not really attempt to comment as much as I would have liked on possible differing success rates of diagnosing dementia in different jurisdictions as a result of inadequate culture-fair tests, and whether they load too much on language skills. The 10/66 group have in fact done some excellent work in this area. Another case of apples and bananas?

Different jurisdictions are going to have different abilities of making a diagnosis of dementia. For example, some of the sophisticated tests we see in ‘Still Alice’, such as blood perfusion imaging or genetics, may not be available in low and middle income countries.

But this sort of inequity in healthcare does need addressing if we are to have a coherent description of ‘world dementia’.

The Report continues with the mantra ‘care for today, if not cure for tomorrow’. The Report says remarkably little on the success (or not) of drug interventions for dementia. But, even if this discussion is to be skirted around altogether, there is clearly some sort of relationship between the resource allocation for the ‘magic bullet’ and the amount of money used to fund social care.

It is impossible to believe that the relentless cut in social care funding in England has not impacted on the wellbeing of persons with dementia in England, and that of caregivers; and one would assume similar issues to hold for other jurisdictions. Yet more apples and bananas?

And the relative compositions of these populations will not only be an artifact of cultural variations but also the socio-economic-political policy of particular countries. And related to this is the different populations of the informal caregivers – clearly relevant given the huge take home message of this report that a substantial location of people living in the World are in Asia and in Africa.

So one gets the impression from taking the report as a whole, while the numbers are interesting, it’s like comparing too many apples with too many bananas? Take for example the analysis in whether the ‘costs’ of dementia are going up or down. The numerous caveats on this include not only the increase or decrease  in demand, the sheer scale of costs inflation in macroeconomics, but also intrinsic changes in service provision (such as large scale transformation to integrated care).

Requiring this further will require much precision in analysis – as it happens that more intelligent use of technology might drive costs down as well as up. Too many apples and bananas to cope with, this time?

The key recommendations of the Report, however, are eminently sensible:

But this is where I think we need to find one big sledgehammer to crack the apples and bananas nut. We do need something universal – which applies to human beings. And that, of course, comes in the forms of human rights and rights for people with disabilities from the United Nations.

I was pleased to see these specifically mentioned in the section on ‘accessibility’, viz: 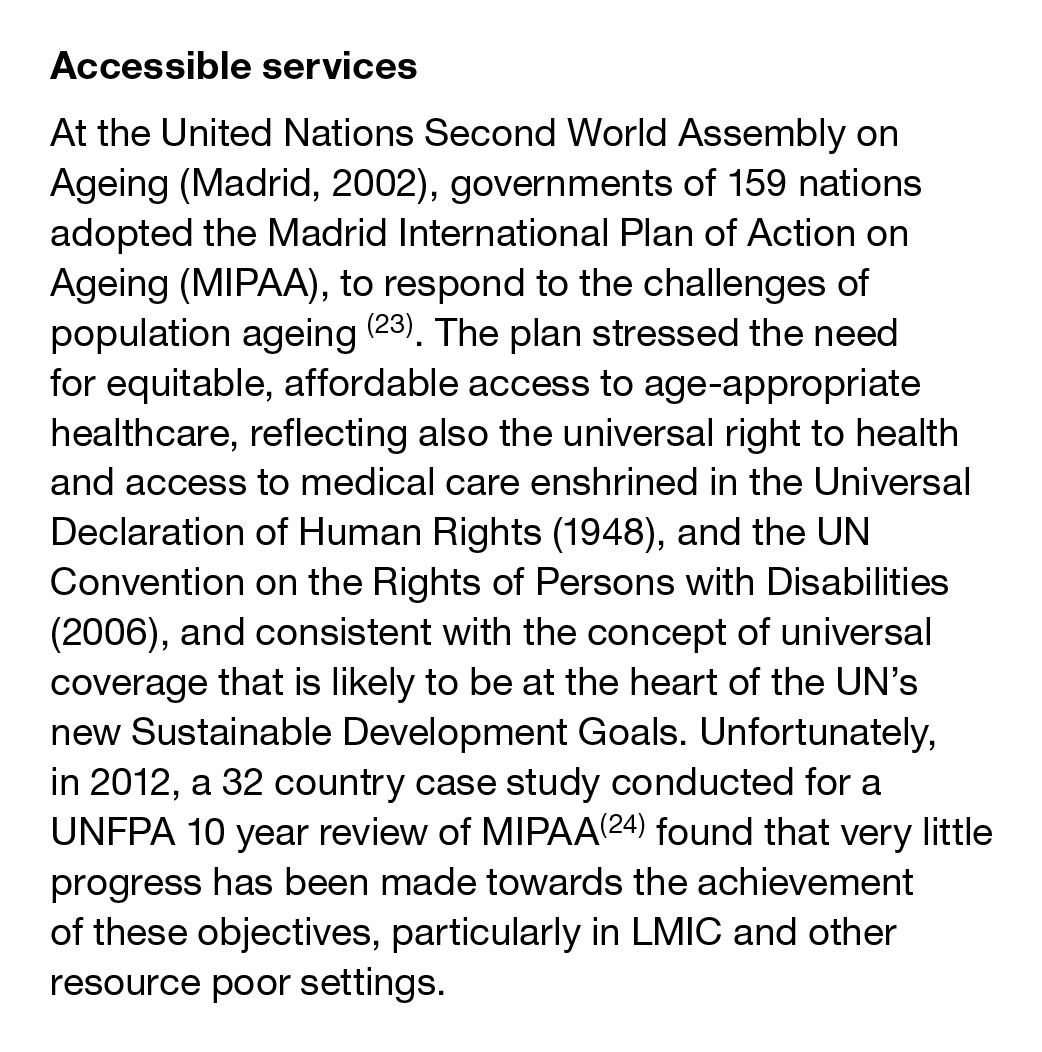 These United Nations instruments, I feel, like at the core of providing the legal justification for providing autonomy and dignity, and for providing fundamental standards in reablement and rehabilitation in the social model of disability. Dementia is a form of disability (enshrined in law in England through the regulations for the Equality Act (2010)) for example.

And we do fundamentally need to have much more research not only on quality of care but also quality of life and how generally one might live better with dementia if you’re a person with a diagnosis or a carer. This means a rebalancing of the research economy. I note that ADI have indeed called for this, and I fully support this. 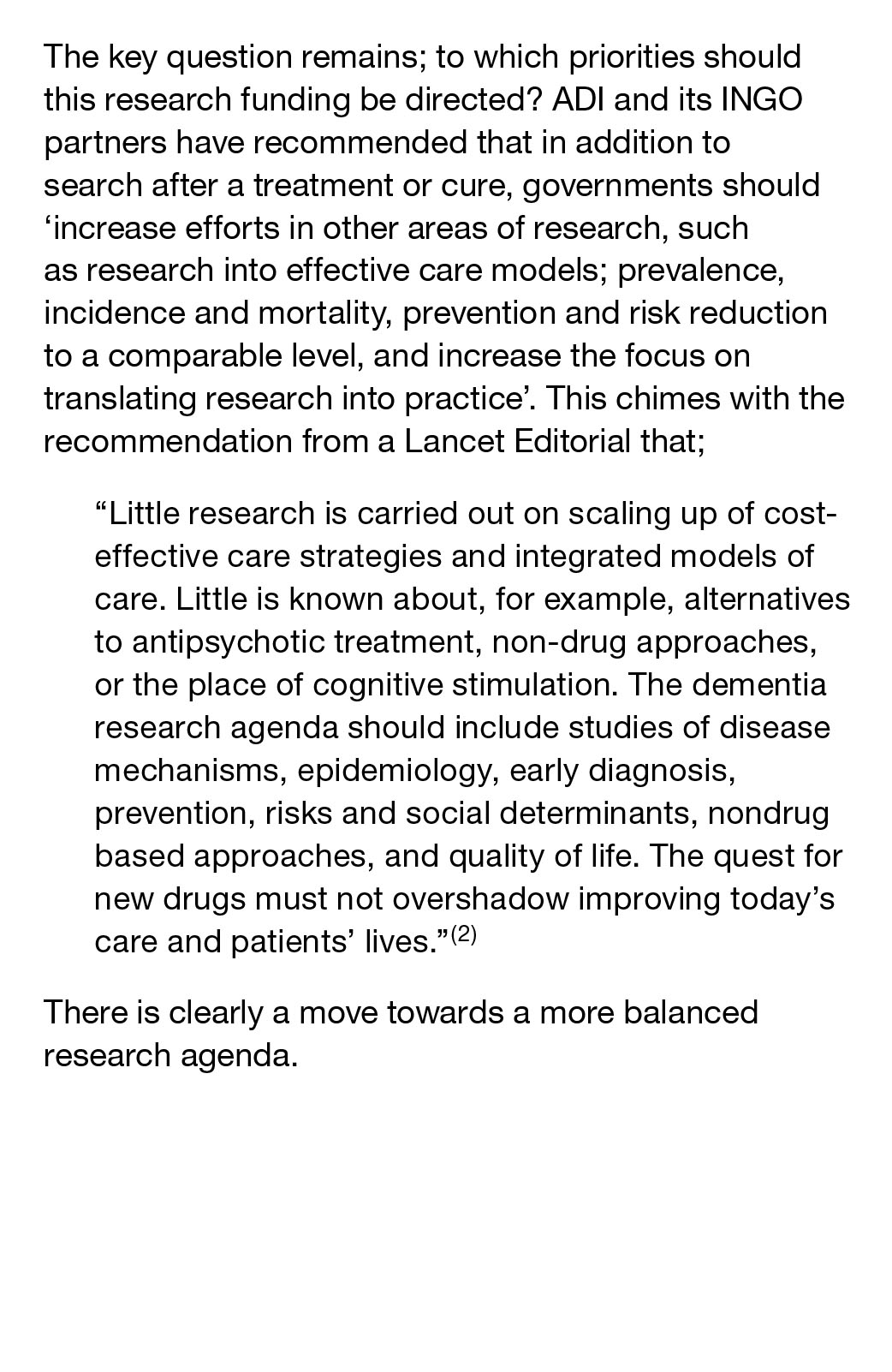 The Report, as an epidemiological contribution, has too many comparisons of apples and bananas and assumptions for me; but it is a superb piece of work. I am disappointed that there is little more than one paragraph as a seeming sop to the issues of young onset dementia, but without any epidemiological data to accompany this sole paragraph maybe that was an achievement. There was no discussion of how dementia friendly communities might exist around the world, particularly in those parts of the world we were told many times are the foci in numbers, Africa and Asia. But taken as a whole as work in progress Alzheimer’s Disease International and the authors of this report must be congratulated on a substantial contribution to the field.