You will have seen an explosion of stuff on ‘dementia rights’, most probably. The hashtag #dementiarights has been extensively used with a lot of goodwill by many stakeholders in the narrative on dementia.

The campaigning hashtag #dementiarights is not owned by any one Big Charity. Looking at the great tweets using this hashtag you will see immediately why.

Having said that, I have absolutely no doubt there will be a territorial ‘grab’ for ‘Dementia Rights’. It is well known that ‘Dementia Friends’ is protected on the national trademark register across a number of different intellectual property classes including, strangely enough, “playing cards”. There is of course a fine line between legitimate protection of intellectual property and something else which can be diplomatically be described as ‘abuse of corporate power’.

Compared to the Dementia Friends campaign, delivered by the Alzheimer’s Society and Public Health England, to a cost approaching £10 million in total (though official costings are rather difficult to obtain), my Dementia Rights campaign literally costs nothing.

All the material has been written by me. I am dually trained in law, including human rights and intellectual property, and medicine, including dementia, so it was an honour and privilege to write the material.

Whilst there have been no sessions yet, there are two very able Dementia Rights champions who have expressed an interest about doing our information sessions. None of the material overlaps with Dementia Friends material. I know because I was a Dementia Friends Champion.

On the one hand, I really enjoyed the opportunity of explaining to the general public about dementia. National policy in 2009 came at a problem of stigma, prejudice and discrimination against dementia, which was in part attributable to ignorance about dementia. Raising basic awareness of dementia has been a joy for me.

But raising awareness of dementia is no replacement for high quality services, including that delivered by allied health professionals including clinical specialist nurses. As the NHS creaks away from a fragmented illness-fixing service, it will need to work constructively with social care to provide a national wellbeing-promoting service.

Dementia rarely travels alone. In the fervour of raising awareness of dementia, it must never be forgotten what the needs of the people with dementia are, and how they relate to carers’ needs. All people with dementia are entitled to the best quality health and social care services, regardless of setting. This might be at home, in an acute hospital, in a care home, or in a hospice.

At worst, “living well with dementia” can appear like a PR stunt, in the same way it can be glibly claimed that “England can be the best place to have dementia in 2020″. But there still needs to massive work done on the reality – social care funding on its knees, and access to palliative care services can be poor. The reluctance to consider dementia as a terminal condition has been a convenient attitude for those commissioners who wish to make their budgets lean, bordering on anorexic.

Advocating for rights in dementia by people with dementia and carers (and these rights are often complementary rather than the same) is only possible if people know what their rights are. That’s why I believe we do need a national programme to unlock these rights for the general public.

The initiative ‘Dementia Rights’ is designed to be self-sufficient. I have no intention, and nor does anyone else, of running these sessions contemporaneously with Dementia Friends. I do not want to advertise by association, particularly when I feel that dementia has got too marketed and commodified.

Rights in dementia, conversely, are inalienable and universal. It was known that racial segregation was morally unacceptable prior to the change in the South African legislation. So it would be wrong to put all your faith in rights in the legal basket.

At a time when the UK government intends to repeal human rights legislation, and with access to justice crippled by the legal aid legislation from 2012, it would be dangerous to make such a campaign too legally focused. The ‘Dementia Rights’ campaign, on the other hand, covers fundamental principles in rights-based advocacy common to all jurisdictions.

Rights are not the only solution. If a 55 year-old female with dementia in a wheelchair, also living with multiple sclerosis, finds herself discriminated against, she might also have a valid claim in sex discrimination, age discrimination, or disability, depending on the material facts.

During the #AliFuneral, for the amazing rights activist and boxer (and many other things) who is Mohammad Ali, somebody tweeted this great graphic about the identity of ‘Wonder Woman’. 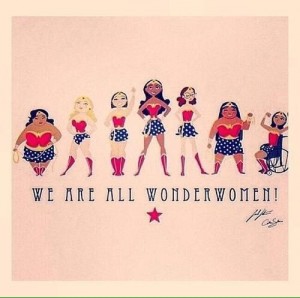 But the analysis in law should not be obstructive to her fighting her injustice. And it needs to be shouted from the rooftops that dementia itself is a disability.

The ‘Dementia Rights’ social movement has complementary but different aims to Dementia Friends. They indeed  have completely different logos, with the Dementia Rights logo incorporated the international emblem for human rights. There are nearly 2 million Dementia Friends, and currently 0 Dementia Rights supporters. It is lazy to claim that there would be ‘some confusion’ only unless you take a very aggressive approach to intellectual property rather than have a genuine interest in public policy. And besides, the Court would flatten any claims under the Trade Marks Act (1994).

In response to my claim to be left-wing than others, the other day, somebody whom I respect massively said, ‘Well, Shibley, you’d be surprised’. I am determined to make my initiative ‘Dementia Rights’ available for the public good for free. I do not intend to ‘sell’ it to commissioners, because human rights and ideally their implementation should not cost money.

Therefore, I am designing a new website, and, as soon as the website is up and running, all of the materials will be downloadable for free. In particular, I want the Alzheimer’s Society, Dementia UK, Alzheimer’s Research UK, DEEP and Dementia Alliance International to know that they can do whatever they want with the initiative.