Nothing could be better than you going to your GP and ordering a simple blood test for dementia?

It’s often said it’s done in a hurry. There’s no form of pre-counselling or post-counselling support.

The scope for hyperbole of reporting of this paper was of course massive.

Ken Howard, who is living with a dementia himself, and who campaigns especially in this specialised area, put it succinctly in a tweet of his.

@KateSwaffer @WhoseShoes @legalaware Thanks .I really believe that the 15 mins following diagnosis can be used to change the rest of lives 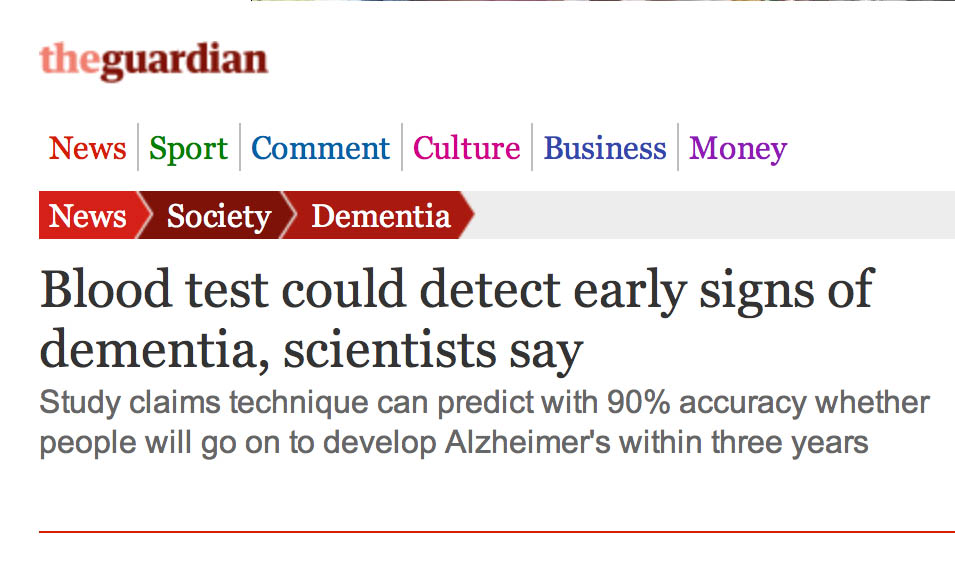 This is based on a concise report in Nature Medicine.

By far the best report was by Laura Donnelly (@lauradonnlee) in the Telegraph:

That particular report was extremely good.

Take for example Donnelly’s care over this sentence:

“Existing drugs for Alzheimer’s disease work best if given early, and can lessen the symptoms, but do not slow overall progression of disease.”

This is absolutely spot on.

The BBC24 news on the other hand at 11 am said, with a headline read out by newsreader Joanna Gosling, “Scientists in the USA have developed a blood test which could accurately predict the onset of Alzheimer’s.”

In this study, researchers from Georgetown University Medical Centre in the US examined 525 healthy participants aged 70 and over and monitored them for five years. During the research 28 participants went on to develop the conditions, according to their reported criteria, and 46 were diagnosed at the start of the study.

Their composite neuropsychological score is a composite score across a number of domains – this is fair, but of course entirely arbitrary. One could argue (or not) it should have been more duly weighted to episodic memory which comprises the more typical early presentations of Alzheimer’s disease.

One of the first issues, as for many papers of this nature, is how reliable these diagnoses are. According to Professor Seth Love from Bristol, in most published series, the accuracy of clinical diagnosis of the different diseases that cause dementia is of the order of 70–80%. This means 20-30% have possibly the wrong diagnosis.

Therefore Love argues that establishing a precise diagnosis by post-mortem neuropathological examination will not, of course, benefit the individual patient but matters nonetheless, for several reasons.

Back to the study reported in Nature Medicine, midway through the research, the authors analysed 53 patients who already had one of the conditions and 53 “cognitively normal” people.

They discovered ten molecules that appeared to”reveal the breakdown of neural cell membranes in participants who develop symptoms of cognitive impairment or Alzheimer’s. They then tested other participants’ blood to see whether these “biomarkers” could predict whether or not they would go on to develop the conditions.

These are specialist assays. They are not ‘routine blood tests’ like a full blood count, liver function tests, or urea or electrolytes. Therefore they, if they were ever to be rolled out, would have considerable cost implications.

And there is an important biological issue why a build-up of toxic substances, if in the brain become manifest as a decline in thinking sufficiently bad to warrant a diagnosis of dementia, should effect cells in the rest of the body.

The separation of the brain and body through the blood-brain barrier is totemic.

The explanation of this by the authors is indeed long.

“The defined ten-metabolite profile features PCs and ACs, phospholipids that have essential structural and functional roles in the integrity and functionality of cell membranes. Deficits of the plasmalemma in AD have been described previously. Studies have shown decreased plasma PC levels and lysoPC/PC ratiosand increased cerebrospinal fluid (CSF) PC metabolites in patients with AD15, as well as decreased phosphatidylinositol in the hippocampus16 and other heteromodal cortical regions. Furthermore, amyloid-β may directly disrupt bilayer integrity by interacting with phospholipids. ACs are known to have a major role in central carbon and lipid metabolism occurring within the mitochondria. They have also been associated with regulation, production and maintenance of neurons through enhancement of nerve growth factor production, which is a known potent survival and trophic factor for brain cholinergic neurons, particularly those consistently affected by AD within the basal forebrain.”

This is a convoluted explanation which does not make clear whether the investigators had any particular hypothesis as to which molecules would be affected BEFORE the study. 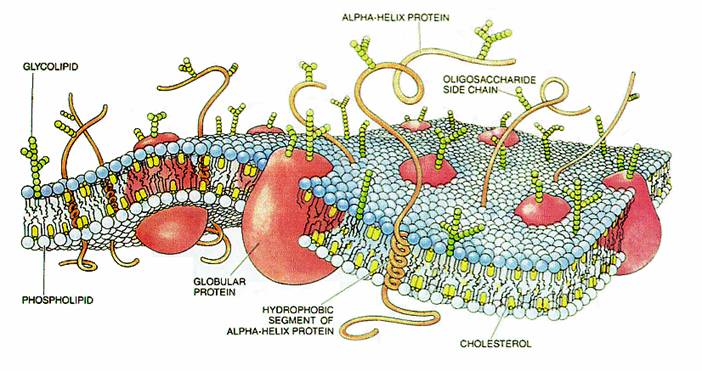 The lack of the clear hypotheses BEFORE the study makes one immediately suspicious about whether the authors have corrected adequately for running lots of statistical comparisons after the study.

But I think this might be OK – as they have applied a statistical Bonferroni correction for multiple comparisons.

This study is reported to be the first research that has been able to show differences in biomarkers in the blood between people with Alzheimer’s before the symptoms occur and people who will not go on to develop the condition. It’s worth noting that there are hundreds of ‘varieties’ of dementia, so this research whilst interesting will not be directly relevant to those dementias.

The finding has potential for developing treatment strategies for Alzheimer’s at an earlier stage – when therapy would be more effective at slowing or preventing onset of symptoms, according to the authors. But there has never been a consistent body of research demonstrating beneficial effects in the majority of patients slowing the rate of progression. Some might say that we should spending much effort into making sure that people are able to live well with dementia.

Prof Federoff, a professor of neurology at Georgetown University, said: “The lipid panel was able to distinguish with 90 per cent accuracy these two distinct groups: cognitively normal participants who would progress to mild cognitive impairment or Alzheimer’s disease within two to three years, and those who would remain normal in the near future.” (as reported in the Telegraph)

“Our novel blood test offers the potential to identify people at risk for progressive cognitive decline and can change how patients, their families and treating physicians plan for and manage the disorder.”

Note this conversion is to mild cognitive impairment (“MCI”) or Alzheimer’s Disease, however, and the two entities are very distinct. It is far from clear, in the experience of a reasonable body of academics, whether you can safely say MCI is a ‘predementia’ stage of dementia.

They are two completely different entities, a point completely glossed over by people with no medical training.

A “mild cognitive impairment” is a clinical diagnosis in which deficits in cognitive function are evident but not of sufficient severity to warrant a diagnosis of dementia (Nelson and O’Connor, 2008).

However, the evidence of progression of MCI (mild cognitive impairment) to DAT is currently weak. It might be attractive to think that MCI is a preclinical form of dementia of Alzheimer Type, but unfortunately the evidence is not there to back this claim up at present: most people with MCI will not progress to dementia even after ten years of follow-up (Mitchell and Shiri-Feshki, 2009).

This unnecessary conflation of MCI and dementia of Alzheimer’s type (dementia), widespread in many media reports, is extremely unhelpful therefore.

And above all, this will have to be replicated with a different group of patients, different clinicians making their probable diagnoses, and a different way of measuring the composite score (or implementing an altogether different neurocognitive assessment, if necessary.)

Dr Doug Brown, director of research and development at the Alzheimer’s Society, and who does not have a medical degree but did a PhD in Molecular Biology at Cambridge after doing his undergraduate degree in Biochemistry and Genetics in Sheffield, added:

“Having such a test would be an interesting development, but it also throws up ethical considerations.”

“If this does develop in the future people must be given a choice about whether they would want to know, and fully understand the implications.”

This is completely correct.

But the paper does not have an ethical discussion at all by the authors – chacun à son goût.

One of the good consequences of the #G8dementia is that there overall has been better awareness of the dementias. This can only be a good thing.

As there is better awareness, the need for accurate reporting is imperative. Massive congratulations therefore to Laura Donnelly who gave an extremely balanced and measured report of this article.

I have been most worried about the question ‘what happens next?’ once you make the diagnosis here of Alzheimer’s disease before the onset of symptoms.

I have always been concerned that the outcome from the medical model, diagnosis and investigations, has to be a medical treatment; in other words you always hear ‘we can intervene quicker with treatments’, with scant regard for living well strategies.

This is why it is so helpful to have Prof Martin Rossor (@martinrossor)  at Qeuen Square, recently put in post as NIHR National Director for Dementia Research.

I think many academics would have allowed publication of these data, but probably wished for a more critical interpretation of the results. But Nature Medicine papers are notoriously short, and in the public interest, on the balance of probabilities, it was ‘better out than in’.

And news just in.

The lead author, Mapstone, said nothing about the efficacy of current treatments in his BBC interview this afternoon. When asked by presenter Carole Walker about this major drawback in the rationale in the screening process, Mapstone argued the need to validate the results first in a larger and diverse population.

And of course Mapstone stated one of his intentions.

Nonetheless, this all has a feeling of ‘the shock doctrine‘ about it – where we’re supposed to be shocked so much, we’re meant to dig deep into our pockets to support Pharma. A bit of money for social care wouldn’t go amiss.