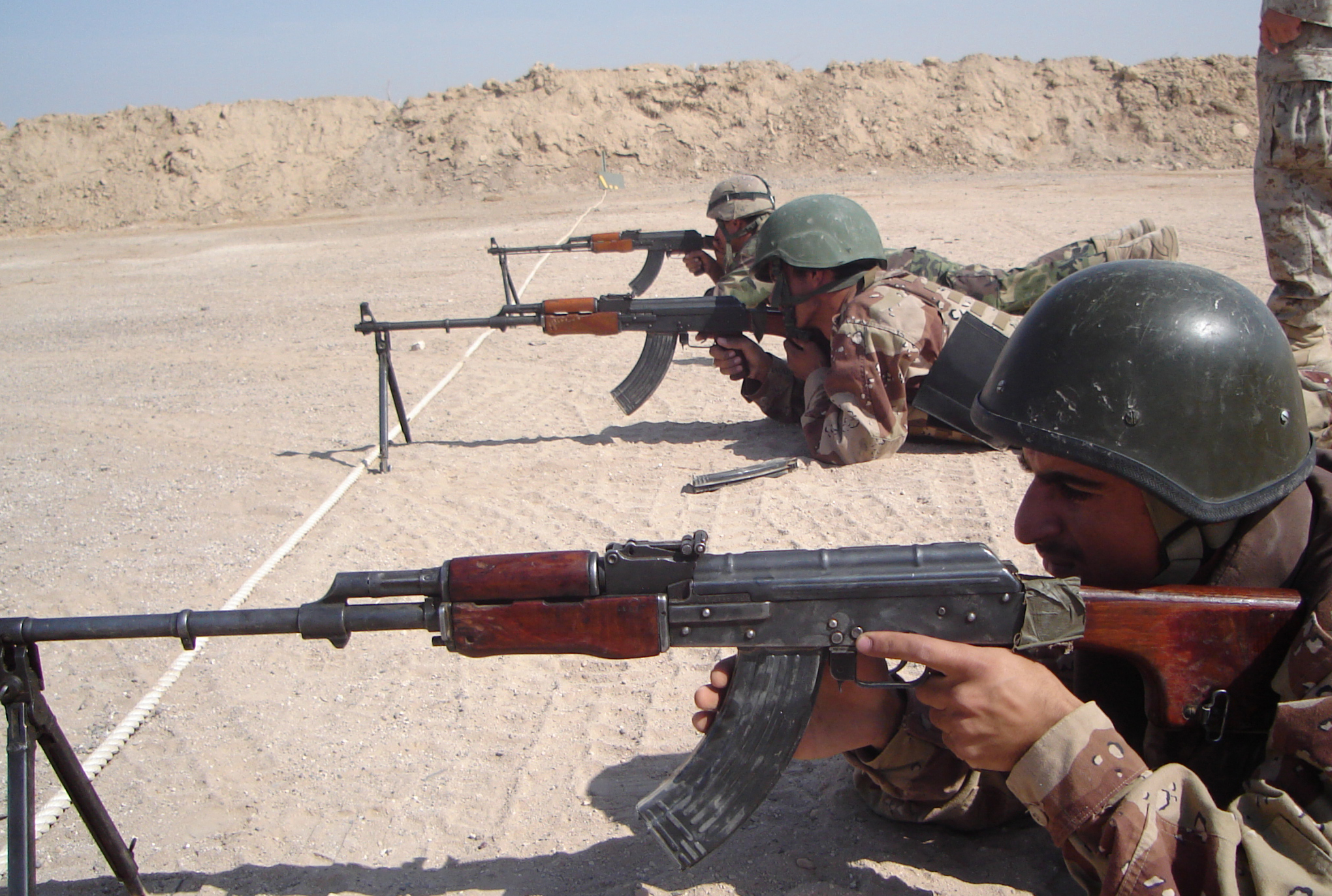 In writing this article, I have no intention of ‘sanitising’ dementia. I’m mindful of two recent comments which fell in my path indirectly: “Dementia is such a cruel disease” (by a daughter of someone living with dementia), and “I don’t know of anyone who doesn’t suffer something as a result of his or her dementia”. The purpose of this article is just to review common motifs in dementia media communications.

When will know when the “war against dementia” is over? This is not an altogether frivolous question, as a MP once famously asked Tony Blair in Prime Minister’s Questions, “When will the war against terrorism be over?”

On 28 November 2013, about dementia, Jeremy Hunt wrote in the Telegraph: “It is a truly horrible disease“.

This set the ‘mood music’ for some of the G8 dementia conference, but the G8 conference was indeed a very positive occasion.

Recently, in “The Loss of Sadness”, Horwitz and Wakefield (2007) wrote that, while depressive disorder can certainly be a devastating condition warranting medical attention, the apparent “epidemic” in modern culture reflects the way the psychiatric profession (perhaps under the influence of pharmaceutical companies looking to widen markets) has understood and reclassified normal human sadness in the DSM-IV as a largely abnormal experience.

The popular metaphorical framing of dementia seems to operate on two levels. It is generalised as a vast, natural or monstrous force that we must “fight”, and it is also located as a very specific condition that affects individuals in extreme ways. In both cases, the effect is to make us feel both terrified and relatively powerless. As Terry Pratchett, who is reported in the public media as having a condition akin to posterior cortical atrophy, viewed: “People seem to think of Alzheimer’s as something rather terrible and dreadful, almost as if witchcraft is involved”

Literally meaning ‘‘away’’ or ‘‘out’’ of ‘‘mind’’ or ‘‘reason’’ in Latin, the actual term ‘‘dementia’’ entered the English language from the French ‘‘de ́mence’’ via the French psychiatrist Philippe Pinel, who made notable contributions to the categorisation of mental disorders in the late 18th and early 19th centuries. Over the centuries, the phenomenology of dementia has been causally associated with witchcraft, moral degeneracy, bad blood and a dissipation of vital energy from the brain, among other factors.

The Wordie for David Cameron’s speech at the G8 summit is indeed interesting, and to be fair in the vast majority is largely upbeat and positive. Whilst there is no recording of the speech on YouTube, the full text of the speech at the ‘G8 dementia summit’ at Lancaster House on 11 December 2013 is available here. 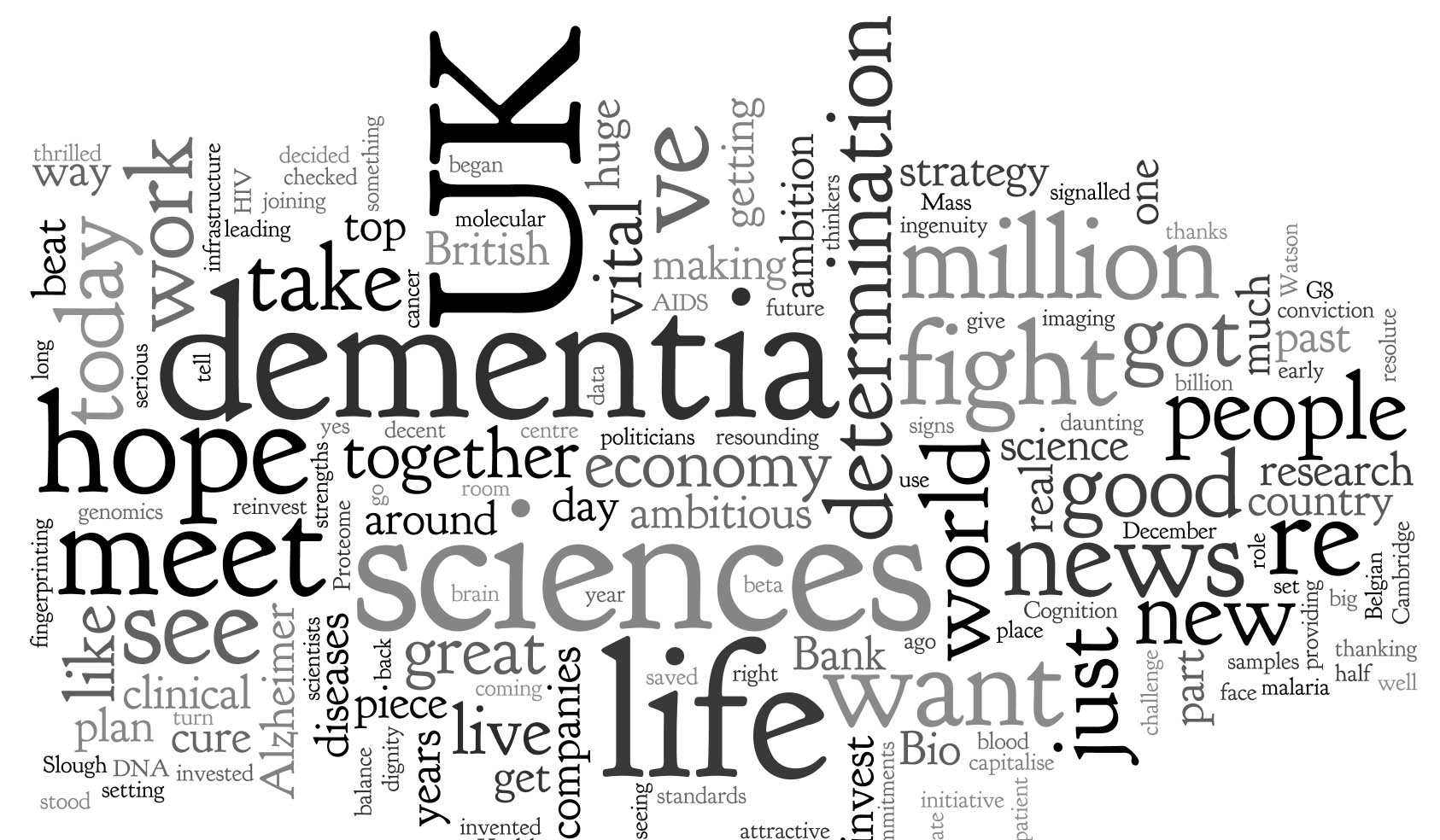 The opening to this speech was pretty chilling, however:

“It doesn’t matter whether you’re in London or Los Angeles, in rural India or urban Japan – this disease steals lives; it wrecks families; it breaks hearts and that is why all of us here are so utterly determined to beat it.”

What exactly is this “it”? What kind of creature is it which steals, wrecks and breaks? This is the fundamental problem. Dementia is not a creature, it’s not an alien, it’s not a mega monster even. It’s an umbrella term covering about 200 different conditions where parts of the brain lost structure and function, leading to problems for that individual; however certain functions remain in the earlier stages, which is why it is potentially unfair to use such graphic language.

It is therefore with some irony Jeremy Hunt had concluded his piece in the Telegraph thus:

“With advances in medical science, the commitment of governments across the world and a willingness from everyone to change attitudes, we truly can be the generation that beats dementia.”

And it’s not the first time David Cameron had used this turn of phrase. In his keynote speech about increasing funding for dementia, the U.K. Prime Minister talked about “the quiet crisis, one that steals at lives and tears at the heart of families” (March 26, 2012). As was noted at the time, this language echoes descriptions of primeval monsters such as Grendel in the Anglo Saxon poem “Beowulf”. Dementia becomes an invader or evil monster that creeps up on people and steals them from themselves. Correspondingly, people living with dementia correspondingly become “victims”.

Noticeably, the Wordie includes “malaria” and “AIDS”. This is because of the following line:

“In generations past, the world came together to take on the great killers. We stood against malaria, cancer, HIV and AIDS and we are just as resolute today.”

Jeremy Hunt in the Telegraph had written:

“In the Sixties people were too scared to talk about cancer. In the Eighties the same happened with HIV/Aids. After a long and painful journey, we are now much more open about both – and better able to tackle them.”

It seems that this parallel with HIV/AIDS and cancer has been very carefully choreographed. There are indeed some successful treatments for many cancers, but cancer like dementia is an umbrella term covering a wide variety of conditions. A “cure for dementia” is meaningless as a term, as the frontotemporal dementias particularly common in the younger age group are a different pathological entity to the most common type, the dementia of the Alzheimer type.

And how exactly has cancer done?  According to the world statistics from WCRF, there were an estimated 12.7 million cancer cases around the world in 2008, of these 6.6 million cases were in men and 6.0 million in women. This number is expected to increase to 21 million by 2030. How is a similar “war” against HIV/AIDS doing? According to AmfAR, more than 35 million people now live with HIV/AIDS, 3.3 million of them are under the age of 15; in 2012, an estimated 2.3 million people were newly infected with HIV, and 260,000 were under the age of 15. Every day nearly 6,300 people contract HIV—nearly 262 every hour.

Dementia has replaced cancer as the “scourge of modern times”. The discourses of the scientific community reinforce this pervasive sense of horror about the dementias. For example, the prevalence of dementias is described in dramatic terms as an “epidemic”. The prevalence of dementia in the UK has in fact thought to be falling in recent times (hence explaining the formidable Prof Burns’ relative unease about dementia being called a ‘timebomb’ by Emily Maitlis on BBC News, a ‘timebomb’ which crucially scientists have failed to address.)

In 2011 in an article entitled “Dementia crusade’s £20m breakthrough”, the Care Services Minister at the time announced a multi-million pound boost in funding for the fight against dementia. The word “crusade” achieves an interesting multiplicity of effects, including an emphasis on faith and battle and on something that not only is metaphysical but can also be “won.” The overall impression is of dementia as huge and ancient, and of massive significance. It appears beyond our grasp and can only be understood through reference to massive natural phenomena (usually disasters) or in biblical/mythical terms.

Flooding is a particular popular literary turn. The danger of flooding has long been associated with dementia. A 1982 UK report was entitled: “The rising tide: Developing services for mental illness in old age“. Rising tides continue to inform the language of contemporary politicians when discussing dementia.

Cameron likes it too, apparently. He referred to the need for Britain to change its attitude to the “rising tide of people suffering with dementia” (May 26, 2012). Alistair Burn’s article “The number of people with dementia in England: turning the tide – Alistair Burns” continued this “tide” theme.

The press and television documentaries abound in “personal” stories about dementia and in tales of cures that are imminent or preventative measures that can be taken to ward it off. Classifying the hundreds of different types of dementia has also been politically powerful. It has undoubtedly facilitated funding and research into diseases for which it is implied that there will eventually be a cure. Ultimately, this broad brush approach is now being used to argue for a “one glove does not fit all” approach: the big corporate winner of personalised medicine, as explained by Cameron thus:

Take just one initiative – Bio Bank. More than half a million people have volunteered to take part in this providing blood samples, getting their vital signs checked, so we can see how diseases like dementia get signalled. The plan is to use Bio Bank to take brain scans of up to 100,000 people – allowing us to see the earliest stages of Alzheimer’s and other diseases. That is the kind of ambition we’re seeing here in the UK ambition that should give hope to people right around the world.

There’s something subtle at work here with the words “ambition” and “ambitious”. Of particular concern to those worried about overmedicalisation is that some experts are now arguing for treating asymptomatic (‘‘normal’’) people with ‘‘abnormal’’ imaging and cerebrospinal fluid biomarker profiles with long-term preventative therapies. This is exactly what seems to be happening here with Cameron’s comment. In a sign of desperation of Pharma wishing to resurrect an ‘ailing industry‘, multi-national Big Pharma believes that early treatment is key to finally achieving a treatment success of any meaningful magnitude.

There are some expected financial memes: like “economy”, “genomics” and “reinvest”. Whilst the spokesmen officially don’t officially promote particular ‘brands’, the speech explicitly mentions UK life sciences companies, like Ixico, Cambridge Cognition, Psychology Online and Proteome Sciences, in developing new tests for Alzheimer’s Disease. As such dementia can’t be seen as “wealth creating”, so the need to promote private markets and innovation is a delicate one to take. However, David Cameron has increasingly appeared giving speeches in the manner of CEO wishing for corporate investment. As such, ‘cure’, not ‘care’, is where the money is at possibly. Cure’s in the wordie; care is not.

“Fight” is THE BIG prominent word. This recurring linguistic device in the cultural framing of dementia is the reliance on military and war-like metaphors. Cameron has been fighting for some time, it’s a wonder he himself isn’t exhausted. On March 26, 2012, he proclaimed rather triumphantly: “We need an all-out fight-back against this disease; one that cuts across society.”

The dementia “time bomb” crops up frequently in U.K. broadsheets and other tabloids. Time bombs are devices that could go off at any time; their most common use has been in politically motivated terrorism. The association of dementia with terrorist tactics is fascinating, invoking the sense of a threat. So when will we know when the war against dementia is over..?

Now listen carefully. As sure as night follows day, academics won’t be able to fight these horrible journalists, destroying the ambitions of people trying to live with dementia in a positive light. Whilst the electoral timebomb continues to tick tock, we can find a cure for this government and their partners trying to demonise those people currently trying to live with dementia. While the war will be long, we can turn the tide on the Pharma companies destroying minds with their false promises, and encourage a new dawn after this crisis where wellbeing interventions are treated seriously at last.

See what I did there?