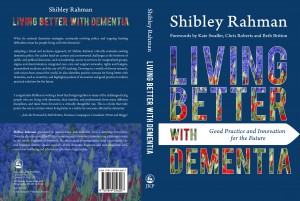 Many thanks to Fenella Lemonsky (@organiclemon) for this helpful review of my book in “Mental Health Today) [here is the link to the original article.]

I find reviews like this a useful steer on future work. Academics can be notorious in misjudging the ‘mood music’ of the main drivers behind the service: people who use the services, which in my case are people living with dementia, their friends and family and other carers. I am in a privileged position in having access to thousands of peer-reviewed papers, but also feel that I have learnt a lot about the dementias from people living after a diagnosis. My knowledge of dementia has vastly improved since I took myself away from the medical lens, and adopted a viewpoint of other professionals and practitioners and people living with disability.

The Forewords to this text are by Kate Swaffer (@KateSwaffer), Chris Roberts (@mason4233) and Beth Britton (@BethyB1886).

The book is on Amazon here.

There has been much written and spoken about dementia in the media recently as a result of the government’s Dementia Strategy, which aims to help those with dementia, their families, professionals and carers be more responsive to needs.

In this context, Living Better with Dementia, by Dr Shibley Rahman, a dementia expert who is qualified in medicine, neuroscience and law, is highly relevant.

Initially, Rahman talks about the stigma of dementia and how this has remained through the past century, despite dementia becoming better understood and having a more positive outlook in recent years. While dementia and the whole management perspective can appear a challenge as the older population survives longer, this book is encouraging and positive. Specific medication that delays the onset of dementia symptoms and other medication like antipsychotics are discussed at length, including their use in nursing and care homes and how specific practices that have no evidence base can be challenged.

Two chapters that for me stuck out as very important were on young onset dementia and on antipsychotics and innovation. Young onset dementia was first explained to me at the author’s book launch, where nurse lecturer Kate Swaffer from Australia, who has young onset dementia, gave a moving talk. The impact is huge for the individual, their family and peer network as well as professionals. It affects employment, career opportunities and has a huge stigma attached to it as it is still often misunderstood. This is all discussed in the book.

The use of antipsychotics and care homes is also discussed at length. This is an important chapter, especially for those who look after those going into residential care, and it can enable them be on alert to good practice and how to spot where medication is used inappropriately. Antipsychotics use in care homes is a complex issue. In many cases careful use can ease distress and agitation, but there seems to be concerning evidence that there is over-prescribing of antipsychotics where behavioural treatments are more appropriate. Using extensive research, Rahman explains why using antipsychotics needs careful thought.

This is a well-written, extensively researched, easy to read and important book for anyone interested or working with dementia.

I had barely known Chris Roberts, new onto the Twitter platform, when he mooted that the title for the book which I had just published didn’t convey the right perspective.

At first, I wondered who this mysterious ‘Chris Roberts’ was. Chris didn’t seem like a troll to me.

It did however dawn on me, rather belatedly to the book production process, that Chris is absolutely right.

I’ve now met complete strangers all around the world who’ve enjoyed the book. One person even recommended the book to me, to which I replied that I had written it.

“Living well with dementia” sounds very much like somebody external decided what ‘standards’ are for living well (the term is actually the name of the 2009 English dementia strategy).

It has the potential to make people living with dementia feel bad if they have an “off” day (which we are all entitled to have).

At the very worst, it is setting up people to fail, as it is inevitable that there will be aspects of all our lives which are not “well”.

But, having said all that, I feel my first book was entirely justified.

It has even been called a ‘game changer’ by some, but I think I did want to send out a message to my colleagues in the medical profession that focusing on deficits all the time was bound to be demoralising.

It should be much more worthwhile to focus on what people can do.

I remember quite a bit of hostility from the medical profession as to why the book took such a multidisciplinary approach, but my own training has been multidisiplinary, and my personal political philosophy is one of equality and justice.

And this hostility was said with a twang of ‘we know best‘ – which was horrible.

I feel that my first book, published in February 2014, establishes for a wide audience why ‘Living well with dementia’ is more than a mere slogan, in that I hope ‘no decision about us without us’ is more than a chant.

Chris and I, as it happens, are just about to mount Ayers Rock, so to speak.

I am honoured that Chris, Kate Swaffer and Beth Britton have all written forewords to my follow up book ‘Living better with dementia’, to be published by Jessica Kingsley Publishers on July 21st 2015.

I think it’s only fair to warn you that it is a very different book to my first one. The full table of contents for ‘Living better with dementia’ is provided here.

I was profoundly influenced by the 24th Alzheimer Europe conference last year – 2014 – which took as its theme, “Dignity and autonomy in dementia”.

I was very much impressed by the listening to individuals living with dementia at that conference, and at the Alzheimer’s Disease International conference in Perth Western Australia where I was indeed on the international advisory board.

Dignity and autonomy are central to ‘rights based approaches’. All of us are entitled to human rights under the auspices of international law.

Across a number of jurisdictions there’s been a fundamental resetting of the compass from ‘friendliness’ to ‘inclusivity’, and inclusivity under human rights and equality law is a pivotal issue.

Furthermore, I feel strongly that any discussion of ‘dementia friendly communities’ must embrace fully the social determinants of health, or inequalities, in thinking about the ‘consumer experience’, such as housing, transport and education. These policy strands must be brought together at this point of time, I feel.

We are undoubtedly in a much better place than simply a few years ago, though there’s much more to be done.

It’s now patently obvious that in England health and social care need to be fully integrated, to further personhood and to avoid people languishing in hospital due to delayed discharge.

There now has to be an open discussion now about people being signposted to appropriate services too (for example speech and language therapy for a person living with a primary progressive aphasia-type dementia).

But it’s simply not good enough to have a lot of signposts with decimated services in reality. I don’t apologise therefore for introducing whole person care and dementia in my book.

I was struck by how other jurisdictions, particularly low and middle income countries, were trying best to help people living with dementia.

Equity in diagnosis and service provision is now a big deal.

Also, the appropriate allocation of resources is fundamental – and particularly so as regards the younger onset dementia population who may wish to find hope through appropriate services as well as through new therapies or ‘Big Data’.

I don’t deny the crucial rôle a dementia advisor can play, but the case now for a national network of clinical nursing specialists I believe.

They are best placed to produce personalised care plans (and we need consistent standards for this across jurisdictions), seeking out health and care problems before they happen.

It’s known that dementia co-exists with many medical morbidities such as frailty. So somebody who can offer continuity of care has much to offer the ‘year of care’ for dementia under the construct of whole person care.

The greater attention to dementia has not been without problems. Some people have inadvertently, by accident, introduced stigma by campaigning on dementia.

Language is important, for example in the overzealous use of the word ‘burden’. We are at last making ourselves familiar with the notion that remarkable talents in art and creativity are unleashed in some people as a dementia progresses.

Also, there is something especially remarkable about the perception of music, causing memories to be unlocked. I, for the first time in my book (to my knowledge), provide a cognitive neural architecture of how sporting memories are unlocked by structures in the human brain to retrieve a ‘gist’, and to improve wellbeing.

Whilst I continue to marvel at conferences including panel discussions on the ‘patient perspective’ without a representative living with dementia, “in my bones” I feel things are changing.

There was quite a huge backlash at the 2015 ADI Conference against some ‘person centred care’ not being person focussed at all, like a form of ‘prescription’.

There was a noticeable movement against “BPSD” and “challenging behaviours” as many of us pointed that dosing people up to the eyeballs to shut them up is completely offensive, when there is concomitantly no search for a root cause in a breakdown of communication.

One person’s ‘agitation’ and ‘aggression’ is how many of us behave when we’re simply pissed off.

But the fact that this narrative is changing is a huge cultural change which has been effected globally, and has had repercussions of the volume of antipsychotic prescriptions. I believe strongly further system change is desirable and possible with elected representatives of people living with dementia taking the lead on service provision and research.

My new book “Living better with dementia” is merely a snapshot of where we are in England at this particular time, at a time of great political and social upheaval.