When I wrote my highly successful book, “Living well with dementia”, using the phrase deliberately from the 2009 English dementia strategy document for England, I never knew the phrase was being bastardised so much for often very trivial initiatives in dementia.

On the other hand, I had huge delight in seeing its immediate relevance to a carers’ support group I went to last week.

I feel deeply hurt that the serious issues in my book, such as advocacy for mental capacity, the presentation of the cognitive neurology of the dementias, or the use of ambient-assisted technology have not been widely discussed amongst the wider community.

In that, I feel the book has failed.

I welcome proposals for the next Government to maximise money into actual service, and to re-establish health funding in line with other comparator countries.

I look forward to the Health and Wellbeing Boards playing a pivotal rôle in establishing some sort of normality for what commissioning in living well with dementia might be as a value-based outcome.

The strangehold of “shiny”, “off the shelf” “innovative packages”, in the drive for the current Government to ‘liberalise’ the financial market in dementia has acted for a cover for disturbing, unacceptable cuts in dementia service provision in the last few years.

I remember ‘boat rocking’ the first time around from the elegant work of Prof Debra Meyerson.

I do not wish to promote frontline professionals, many of whom have spent seven years at least at medical school or in their nursing training, to become lambs to the slaughter in the modern NHS and social care.

Keeping it real, we know that real frontline professionals in medicine and social care, even if they are not in a downright toxic environment requiring whistleblowing, can find it dangerous being risk appetitive.

Indeed, being risk appetitive, while great for innovation and leadership, can literally be deadly for patient safety.

The next Government has enough on its hands with enforcing care home standards and sanctioning for offences against the national minimum wage for paid carers as it is.

We have to think for a second for the vast army of paid workers in the NHS, as well as the rather well paid people who like their shiny new boxes, I feel.

The schism between the social media and what is happening at service level I think is most alarming, and perhaps symptomatic about how the health and social care services have begun to work in reality.

This is tragically being reflected on the world stage too, though I do anticipate that the G7 legacy event from Japan which is looking carefully at their experience with care and support post diagnosis, next year, will be brilliant.

It is important for leaders in dementia to have authenticity.

I have severe doubts and misgivings about what gives the World Dementia Envoy the appropriate background and training in dementia for him to be in this important post.

It is all too easy for ‘thought leaders’ in corporate-like medical charities to have no formal qualifications or training in medicine, nursing, or social care, and opine nonetheless about weighty issues to do with policy.

I am concerned that the global ‘dementia friendly communities’ policy plank appears to have been straightjacketed through one charity in England, when it is patently obvious that various other charities such as the Joseph Rowntree Foundation have made a powerful contribution.

The media have largely not engaged in a discussion about living well with dementia, but engaged simply with Dementia Friends or a story arising out of that.

I am alarmed about the lack of plurality in the dementia research sector.

I think the All Party Parliamentary Group (“APPG”) for dementia have done some valuable work, but their lack of momentum on specialist nurses including Admiral nurses, spearheaded by the charity Dementia UK, seriously offends me.

I am sick of how the notion of ‘involvement’ of people with dementia has been abused in service provision mostly, although I am encouraged very much by initiatives such as from DEEP and Innovations in Dementia.

I think there have been genuine improvements in engaging people with dementia in research, through a body of work faithfully peer-reviewed in the Dementia Journal looking at heavy issues such as the meaning of real consent.

I am now going to draw the line of tokenistic involvement of people with dementia to front projects without any meaningful inclusion.

And in fairness, this tokenistic involvement is, I am aware, happening in various jurisdictions, not just England.

All too often, “co-production” has become code for ‘exploitation’ rather than ‘active partnership’.

The prevalence of dementia is actually falling in England, it is now thought.

The ‘dementia challenge’ was our challenge to making sure that we adequately safeguarded against people rent seeking from dementia since 2012.

In that, I think we have spectacularly failed.

I am overall very encouraged, however, with the success of the huge amount of work which has been done, including from the highly influential Alzheimer’s Society, and from the communitarian activism of “The Purple Angels”.

All this ‘radicalism’ has taken on a rather ugly, conformist twang. 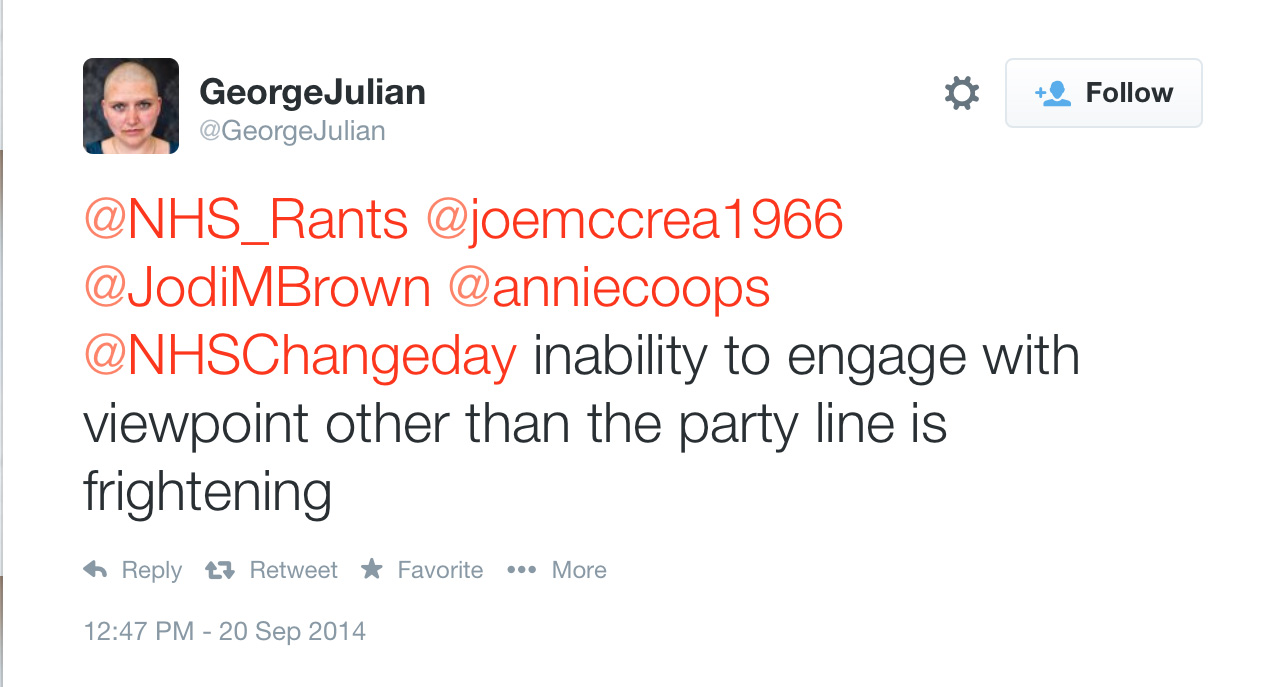 Now is though time to ‘take stock’, as Baroness Sally Greengross, the current chair of the APPG on dementia, herself advised, as the new England dementia strategy is being drafted ahead of the completion of the current one in March 2015.