A ‘cure for dementia’ would be wonderful.

It’s clear not everyone is going to be a winner from the G8 Dementia Summit promotional package. The write-ups of the dementia research strategy have included ‘the usual suspects’ from “Pharma-friendly communities”, with a token sop to research for wellbeing.

The G8 Dementia Summit is an extremely good way of promoting dementia as a worthy public health issue. Many passionate campaigners will indeed take to the stage to explain, often in very personal terms, why dementia is an incredibly important issue for them. It has become extraordinarily difficult not to know somebody who, in one way or another, is touched by dementia.

The complex nature of dementia has forced policy makers and national governments to invest the financial resources available in three main areas: first, medical research to find a cure for the disease or at least ways to prevent it; second, pharmacological care; and finally, support for caregivers, such as information, training, psychological assistance, etc. Arguably though, none of the three areas, however, have the ‘real’ person at the centre of their interest.

There is also now way that the media can get away with their marginalising of carers for a ‘cure’. Carers face considerable pressures, as they are forced to understand at shotgun notice the biologicial, personal, legal and financial consequences of the dementia. Apart of anything else, many carers, often employed by large private companies, are paid less than a living wage on a ‘zero-hour contract’. Unsurprisingly, how we prioritise the value of care rather than the dividend of a shareholder in a large pharmaceutical company is an important debate to be had.

The cultural stereotype of dementia across various countries is indeed noteworthy. The picture of dementia emerging from these socially-constructed discourses is, at worst, that of a body without a mind, of a hollow shell: that is, a picture in which the dementia “obliterates” the subject, and calls for constant care either by the family members  – informal caregivers – or by formal caregivers, at home or in nursing home facilities. This is a powerful pitch by dementia charities, but stigmatises massively those individuals wishing to lead normal lives with more mild forms of dementia.

The stigma is in fact deeply entrenched. The Merriam-Webster Online Dictionary of 2004 defines dementia first as “mental deterioration of organic or functional origin.” Although a generalization [sic], it seems innocuous and close to what is intended by physicians. However, on further reading almost every dictionary refers to its derivation from Latin, meaning madness or out of one’s mind. This debate has, nonetheless, recently hit a new level with the discussion of whether the word ‘dementia’ should be dropped altogether.

‘Minor or major neurocognitive deficits’ as an alternative term has its supporters and critics.

Norman McNamara, well known campaigner for dementia awareness, has even asked on his Facebook page whether dementia “should come under a mental health banner” (reported here).

Kitwood produced a ‘sea change’ in thinking for placing the individual with dementia at the centre of all discourses about it. Within this social-psychological approach to dementia of the Alzheimer type, Kitwood ́’s concept of personhood emerges. Personhood is defined as ‘a status or standing bestowed upon one human being, by others, in the context of social relationship and social being. It implies recognition, respect and trust’.

Dementia is not an unitary construct. It does not only affect the old. And yet ‘messaging’ of dementia consistently has an unpleasant streak of ageism. According to Richard Titmuss, “Viewed historically, it is difficult to understand why the gradual emergence in Britain of a more balanced age structure should be regarded as a “problem of ageing”.”

Ageist stereotypes in Western culture, from the classical period to the present, have gained strength in a social environment in which ageing is perceived as a problem and portrayed negatively. The general connotations of being old – ill, disabled, with failed memory, senile, sad, lonely, grouchy, sexless, boring, lacking vitality, in decline, unable to learn and unproductive. Stereotypes are powerful, as they spread through cultural productions, media, and policies, hence perpetuating them in the social structure, and empowering collective ideologies by marginalising those belonging to the stereotyped group.

That the G8 dementia summit should have such a naked Pharma bent is of course no big surprise. Sales of the five dementia drugs were just shy of $3 billion in 2007. Donepezil and memantine accounted
for 85% of those sales; tacrine had fallen out of use because of its high adverse effect profile. The memory-boosting drugs, whilst expensive, are generally thought to have very modest effects; and there is no evidence in humans that they slow the rate of progression thus far.

However, the effects of medical labels are always mixed.

The danger, observed by some, is that the work of medical researchers has transformed what for years was seen as a rare medical condition into a “major killer” and threat to the wellbeing of predominantly the elderly and their caregivers.

This transformation was critical to the consolidation of a movement born from the grievances of sufferers of a range of cognitive, behavioral and personality impairments and their caretakers, because it gave these impair- ments a biomedical definition, thus creating an “entity” deemed modifiable through the application of biomedical science.

The experience of the USA is interesting. As dementia advocacy grew, so did coincidentally the small government ideology of the Reagan years. (A similar phenomenon is happening here with the UK Coalition administration, though perhaps a ‘small state’ should be more accurately described as an ‘outsourced state’). The Omnibus Budget Reconciliation Act of 1980 was the legislative vehicle for the implementation of this ideology, which reduced social services at the same time that it appeared to respond to the “crisis” and public grievances. The Act gave broad authority to the states to restrict Medicaid program eligibility, reduce the number and type of covered services, and limit payments to hospitals.

These reductions in federal support for health and social services occurred at a time when states and cities were experiencing the combined effects of a lagging economy and of various spending limitations imposed by the passage of tax-limiting measures such as Proposition 13 in California and Proposition 2 1⁄2 in Massachusetts.

Yet another element leading to the triumph of “cure” over “care” was a largely idealised notion of “nuclear family” family functions, which grained ground during this time of political and cultural conservatism, and legitimised an inequitable societal workload falling on women in the provision of long-term care.

Clearly, caregiving, a resource-intensive activity falling predominately on women, is neither “budgetable” nor appreciated at the policy level. So again, rather paradoxically, not only did the heart-rending testimony of caregivers to Congressional committees advocating for more support fail to lead to more formal services and relief of women’s workload, it also legitimised the biomedical framework that deviates public support away from caregivers, as it feeds the hope for effective treatments or a cure for dementia that presumably will derail the “explosive” future costs of caring.

Ironically, here in the UK, the website of the “Dementia Advocacy Network” gets taken down at the end of next month. It is in fact the last week of its hardworking manager, Jan Kendall. This Network was invaluable in offering non-statutory guidance for advocacy, in keeping with statement 9 of the recently published NICE quality standard. This statement on independent advocacy. 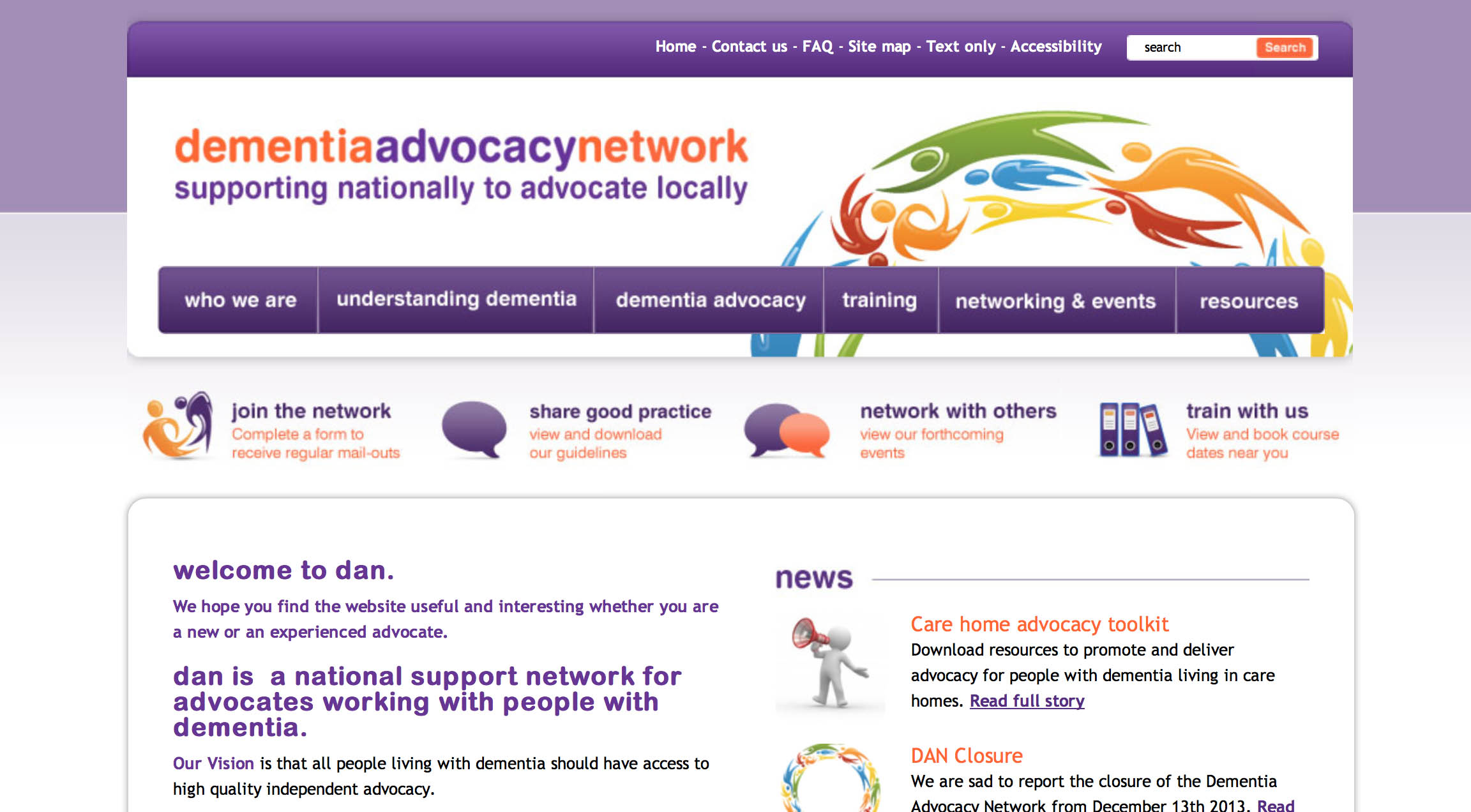 Jan Kendall’s experience is sadly not unique. There has been a starvation of funds as many entities in the third sector have found it difficult to cope. The situation in the charity sector is remarkably similar to how City firms have experienced maintained revenues, while high street law firms have been forced to shut down.

The narrative from “Pharma-friendly communities” in the media threatens to drown out what is actually happening on the ground. It is recently reported that budget cuts forced a record 220,000 dementia sufferers to turn to hospital A&E units for help last year.

There is, of course, nothing to stop Big Pharma or large dementia charities to act as good ‘corporate citizens’ , in keeping with the views of Professor Michael Porter at Harvard Business School, in helping to fund frontline care.

But the danger is that this ‘drive for a cure’ represents yet another attack on the running of a universal healthcare system, which should be in principle funded through a fair and equitable general taxation.

“Volume, costs and content of medical care depend on demand, which depends on professional and public expectations. The UK National Health Service (NHS) removed price barriers to access, and depressed expectations became an important factor in cost control. In USA, professional control of care business inflated expectations, and consequent costs. Managed care in the NHS failed to rationalise care because managers seem even less trustworthy than clinicians as arbiters of rational expectations in contexts of permanent underfunding. Development of rational expectations depends on restored trust, mutual and managerial respect for the expertise of both clinicians and patients, and transcendence of the provider-consumer model for value production in medical care.”

This is, contrast, is EXACTLY what person-centred care should be aiming to achieve: allowing people to live well with dementia. The ability of drugs to help people to live well with dementia currently is relatively poor. But Beth’s experience should indeed be about inspiring people who care about dementia. Thanks also enormously to the Department of Health for their efforts in this direction.

Enormous thanks to Dr John Rumbold, Dr Jonathon Tomlinson and Prof Julia Simard for indirect help with this article.