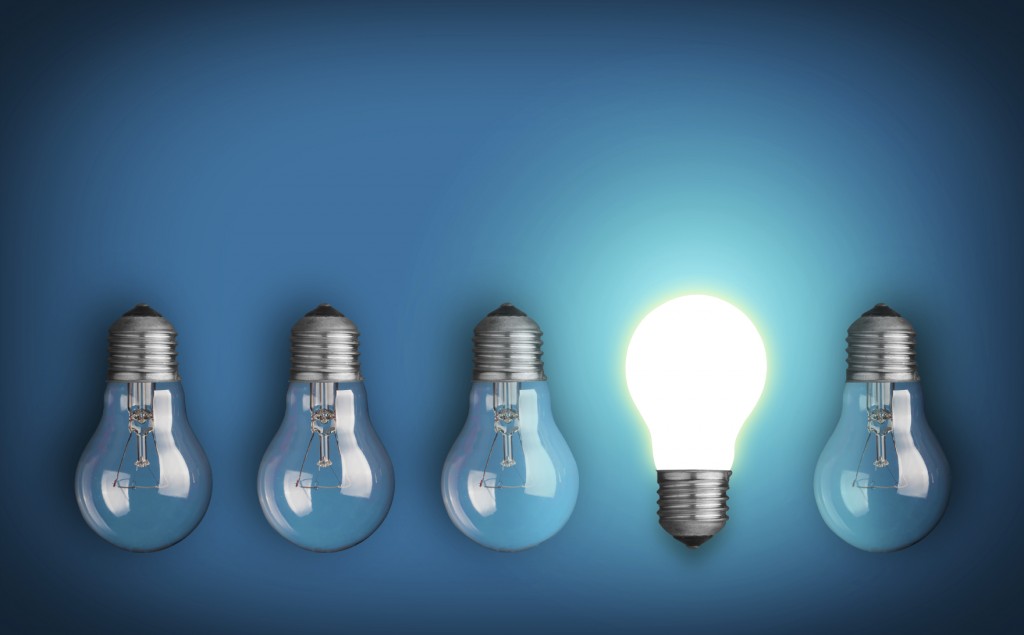 Idea concept with row of light bulbs and glowing bulb

I think the worst aspect of the term ‘innovation’ is the term itself. For me, it more often than not conjures images of gimmicks and the snake oil salesmen of these gimmicks.

But there’s a certainly a place for ways in which people can be motivated to take an interest in his or her own health. There needs to be, nonetheless, an informed debate; for example, a healthy “health check” is no guarantee that you won’t succumb to some malady within a few years time.

I’ve known people to run a full distance on a cardiac treadmill in a hospital, with no monitored changes in heart function, only to drop dead seconds later in the hospital car park.

Nonetheless, most definitions of innovations are quite broad, and are generally doing things differently or doing different things.

It’s often said by physicians that the vast majority of a reliable diagnosis can be taken from a good history of symptoms. That I believe to be supremely the case for dementia.

The question, “Have you had trouble with your memory?”, is likely to engender a lot of false positive responses as a diagnostic screening tool for dementia. A better one would be possibly, “Have you had trouble with memory but feel that your mood has been quite good?” But even this question would not be ‘fool proof’ as people can live with both dementia and depression.

There is a good ‘push’ argument against supporting a status quo in the current approach to dementia. That is, it is overly reliant on a medication solution, when the vast majority of drug research work in this area has resulted in failure. This ‘promissory hope’, of “one last push”, is needed to keep the general public engaged with this mission, and certainly helps the surpluses and profits in the short term.

Indeed, many of the arguments for ‘barriers to innovation’ can cut both ways. For example, it might be the case that in these economic challenging the times the last thing you’d want to do is to take a massive punt on redesigning diagnostic care services for dementia. Or, on the other hand, you might take the view that there’s nothing to lose.

The need for innovations to be ethical and accountable has become increasingly important under the umbrella term ‘responsible innovation’. Not all dementia is Alzheimer’s disease, and yet we are led down the Alzheimer’s path continually by the media. If there were a ‘biomarker’ for Alzheimer’s disease which was very specific and sensitive, and inexpensive to get the results of, would this information help you?

The answer is possibly – but if this were coupled with a private insurance system, you could also find your insurance premiums going through the roof, even if you were to have forty years of healthy living ahead of you.

Certainly the more expensive the investigation doesn’t make it more fool-proof. I’ve known patients with a clear diagnosis of frontal dementia who’ve had plum normal investigations including state of the art MRI scans. And likewise people with radiological atrophy on MRI who don’t have dementia.

I see innovations in dementia as a tool in dementia diagnosis, support and care, but only if used responsibly. Otherwise more noise can be added to the signal, as was clearly the case for incentivising primary care to run case finding tests for dementia. The very predictable unintended consequences that the number of false positive diagnoses of dementia also shot up, although ignorance is possibly worse than fear.

Ask any corporate strategist about the future and he or she will always tell you some of it is about turning threats into opportunities. For me, if you cut through the shill and waffle, an intelligent way to redesigning dementia care isn’t a bad idea, even if I would not necessarily start from here.

This is the talk I will be giving for #WHIS16, the World Health Innovation Summit in Cumbria, on innovation as a societal response to dementia.