Looking forward to 2015-20, I believe strongly England should head towards a ‘whole’ approach for the person with dementia; call it what you will, but it should be ‘whole-centred care’. 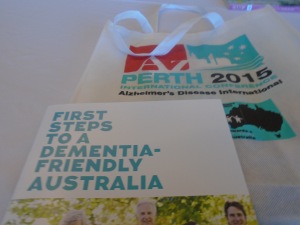 At the point of diagnosis, one person is not the only person to be given the news. Closest ones are invariably involved. Some friends will drop by the wayside, but over a few years a person living with dementia will reach an equilibrated network of genuine close friends and/or family.

The person living with dementia will need personal relationships to optimise wellbeing. The immediate environment, the social determinants of health, such as housing, transport and education, I feel are vital to the dementia inclusive community.

But where England now needs to be is not simply person-centred – person-centred can too easily become activity-centred or task-centred for a particular person, without duly acknowledging what it is like to be that person (understood, for example, through ‘life story’).

It’s, though, impossible to ignore the detail of Tom Kitwood’s articulation of personhood in the seminal 1997 “Dementia Reconsidered”.

This way forward is not altogether family-centred or relationships-centred either, or environment-centred.

And we need to give careful consideration to the parties we’re trying to help.

For example, there’s a case for clinical nursing specialists who can deal with the more subtle medical points which might prevent a person with dementia going into hospital. This point about avoidable admissions, as entering hospital can be a cause of both morbidity and mortality for a person living with dementia.

Effort into the design of the wards, or trained staff, is time well spent for hospital care, given the large numbers of adults in the acute general medical and surgical admissions daily.

But there’s also a case for some people, invariably unpaid family members in a care and/or support rôle, to have support for their resilience in mental health: such caring people invariably find their rôle deeply rewarding, but many find themselves with financial, social and psychological pressures of their own. They therefore need help with coping strategies sometimes, and their quality of life has a direct effect on the quality of life of people living with dementia.

Inability to deal effectively and conservatively with issues such as mobility, falls or incontinence might lead to a person with dementia heading towards a nursing home when he or she had not intended that fork in the decision tree. A clinical nursing specialist is expected to have a beneficial impact here, above that of a ‘dementia advisor’.

Such a rôle might be suitable conceivably for a psychiatric nurse who can cope with work both in hospitals and the community, who is able to take on a proactive case management load. But such nurses themselves have education and training requirements, and need help with making sure that they do not over commit themselves in work.

There is nobody more important in dementia care than the person living with dementia. That’s why it is crucial that all systems for service provision and research programmes are designed in the most part by these stakeholders themselves.

‘Professionals’ should not be abusing the power dynamics by using language, such as ‘challenging behaviour’, ‘wandering’, or chemicals, such as antipsychotics, inappropriately. Use of antipsychotics under the law inappropriately without consent might fulfil the definition of common assault in many jurisdictions.

But physicians and psychiatrists do have a rôle to play, but only if it is a transparent one. There should be no lying about the claims about existing drugs: cholinesterase inhibitors might improve symptoms for some for a limited time window, but are not considered to slow down progression according to the current evidence base.

Medications do have a role. For example, some patients with diffuse lewy Body dementia are best off not being prescribed certain types of medications, and may draw considerable benefit from being treated by others for some particular symptoms. But here medics have to be extremely careful about not pathologising behaviour pejoratively. Easily done.

For a person with dementia with complicated speech understanding and production issues, somebody with speech and language training might be able to advise on how best not to distress a person with a complex language problem – this might include careful repetition of some words (if there is a concomitant short term memory problem), or avoidance of complex sentence structures.

Social care practitioners are also at the heart of dementia care provision. They have an unique dual role in enabling and protecting people’s interests; but you do need to engage with risk to live well, and advice here is crucial. Social care practitioners have an unique combination of relevant skills, such as working with people professionally, understanding of legal issues – possibly with the help of legal professionals – such as equality, fairness and justice, or social science research methods. But I don’t want to leave this area by painting a misleading rosy picture – social care funding has been on its knees, having not been ringfenced since 2010.

At the moment, it’s simply not good enough to have people signposted to various services with services being decimated. While awareness from initiatives such as ‘Dementia Friends’ is undoubtedly to be welcomed, what we actually need is education, and this includes in the workforce itself.

We fundamentally need a rejigging of the health and care services, with prevention of bad health a top priority too. The system needs to be reoriented from fixing illness (but be able to do it when required), and more towards proactive forward-looking care. Many people find themselves totally lost in the system, not knowing what employment or welfare solutions (as well as health and care solutions), are available; a ‘whole person’ approach needs to be a central issue now.

It is now imperative to recognise that people with dementia have rights. This rights-based approach has a legal substrate. With recognition of instruments such as the UN Convention on People with Disabilities, we can force a rethink of what we understand by capacity. While there is a reasonable legal rationale for capacity in protection of parties, too often capacity is weaponised against the person living with dementia. This abuse has got to stop – the assumption in law, though, is that everyone has capacity until proven otherwise.

Whichever way you look at it, to survive, and for services to work well for the benefit of people living with dementia and their closest, there needs to be a flexible and adaptable approach, which places huge public value on stakeholder involvement. This is not simply a dry economic argument, it’s a social imperative for all of society – but better health, provided in a non-fragmented way, can help with the formidable budgetary constraints of the NHS in future.

On that note, it’s now further impossible to ignore that organisations such as the Dementia Alliance International, composed of and representing views of people living with dementia, will now have to be central to all discussions.