The biggest dementia conference to be taken place in Scotland (“Conference”, attended by 800 professionals, people with dementia and carers) was held in Glasgow last week (20-23 October 2014).

The focus of the conference was Dignity and autonomy in Dementia and the four day event explored in quite some detail how recognising the human rights of people with dementia, their carers, partners and families is key to ensuring dignity and respect, as well as overcoming stigma.

It was the 24th Annual Conference of Alzheimer Europe (@AlzheimerEurope, an umbrella organisation of 36 Alzheimer associations from 31 countries across Europe), supported this year by Alzheimer Scotland, .

The timetable was exacting.

The people there were very special; for example Tommy Whitelaw (@TommyNTour) mentioned in Alex Neil MSP’s speech at the conference. Tommy and Irene Oldfather (@IreneOldfather) happened to be passing through during one of my poster sessions. 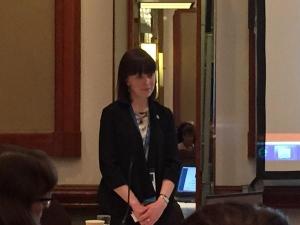 Well done to the conference organisers for putting it together, especially Gladwys Guillory. 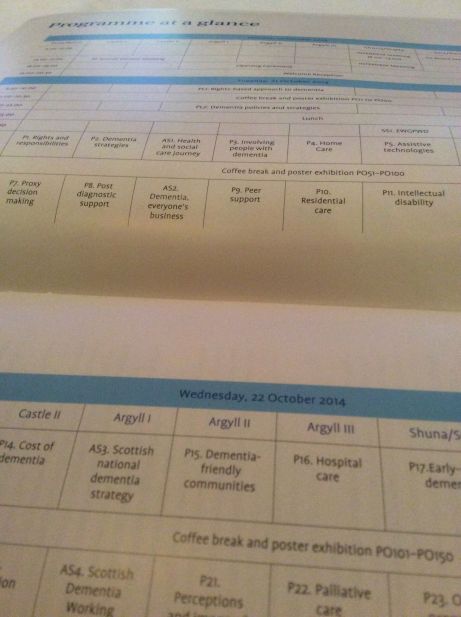 The main conference hall of the venue, the Crowne Plaza in Glasgow, the Argyll Suite, was majestic.

I particularly liked the ‘live Twitter feed’ at the front of the hall, where curiously Kate Swaffer (@KateSwaffer) appeared many times all the way from Australia. Here I am appearing with my ‘selfie’, with somebody well known in the foreground of the photograph.

The relative failure of the medical model in addressing the needs of people with dementia and caregivers was a pervasive theme throughout the whole conference.

I had a nice chat with Marc Wortmann (@marcwort) over one of the lunches. Marc is in charge of all aspects of ADI’s work (ADI = Alzheimer Disease (and associated conditions) International; @AlzDisInt). Collaborating with the Board, Marc implements finance and campaign strategies.

Marc represents ADI at international conferences and in the NCD Alliance and takes part in WHO and UN meetings. I was also able to bump into Jean Georges (@JeanGeorgesAE), the Executive Director of Alzheimer Europe. 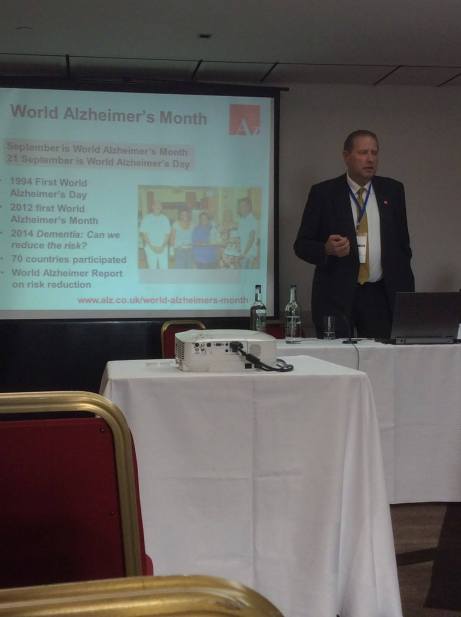 Cabinet Secretary for Health, Alex Neil, delivered a clear keynote speech to the conference at the Tuesday morning plenary session, in which he paid tribute to the immense contribution of Tommy Whitelaw. 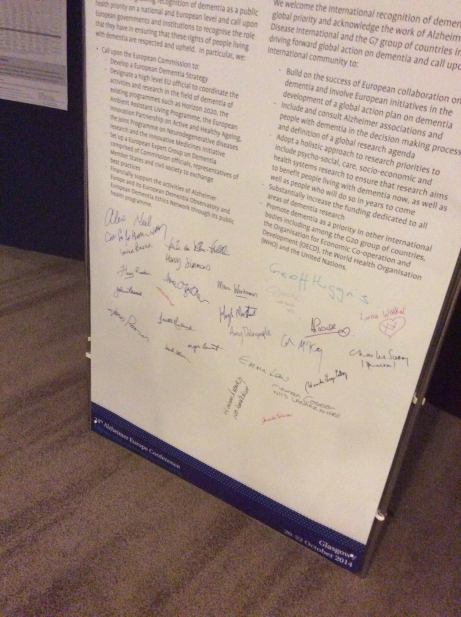 The satellite symposium sessions were well put together, and attracted substantial audiences.

There was an amazing moment when Agnes Houston (@Agnes_Houston), Chair Scottish Dementia Working Group, said to Helga Rohra (@ContactHelga), the Chair of the satellite session and Chair of European Persons With Dementia, “All we people with dementia need is a bit of help — AND A BIT OF TIME!”

A quotation from Agnes – from a previous conference – says it all for me.

The audience burst out laughing.

The reason for this is that Agnes had been originally timetabled to have more time for her slot, apparently.

As the conference was themed around the law, including human rights, invariably discrimination against people with dementia came up in various forms.

I asked about the topic several times.

One talk of the entire programme which I thought was truly outstanding was PL1.3. Gráinne McGettrick (Alzheimer’s Society of Ireland): The UN Disability Convention as an instrument for people with dementia and their carers. 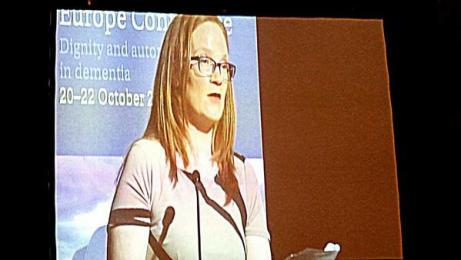 In the English jurisdiction, dementia can count as a disability; therefore there are statutory requirements for ensuring dementia-friendly communities from employers. Also, unfair dismissal of a person on account of being newly diagnosed with dementia will clearly be unlawful.

A member of the audience politely pointed out to me afterwards that a person normally gets sacked first, and then gets his or her diagnosis of dementia confirmed much later, so at the point of dismissal the dismissal does not obviously appear unfair legally.

I found this observation incredibly insightful, as there have been thus far no ‘test cases’ of unfair dismissal on grounds of a diagnosis of dementia in the English jurisdiction.

I had brought along my book ‘Living well with dementia’, but I rarely got a chance to read (or refer) to it during the course of the whole week!

I asked several times why there is no representative of persons living with dementia or caregivers on the World Dementia Council (@WorldDementia). The background to this fiasco is explained here.

I had designed that I would be staying in the same competitively-priced hôtel as Jayne Goodrick (@JayneGoodrick) and Chris Roberts in Glasgow for the 24th Alzheimer Europe conference held in Glasgow, the city where I was born.

It was by chance we gave a lift to Dr Ruth Bartlett (@RuthLBartlett) to the conference venue. Ruth was staying, as it turns out, in the same competitively-priced hôtel.

Ruth is of course well known for her well respected contributions about the citizenship of of people living with dementia, and how this has influenced the ‘involvement’ of people with dementia in policy.

This was us just before the opening ceremony – when we were full of energy.

I really enjoyed speaking with Geoff Huggins (@GeoffHuggins), who gave an excellent speech in the opening ceremony.

I presented my talk on how dementia healthcare would not be best served by a private insurance system, because of the potential problems of ‘moral hazard’ and genetic discrimination.

This talk was, overall, well received.

I was particularly pleased with the wide-ranging, excellent discussion we had after my talk. Thanks especially to Amy Dalyrymple (@Amy_Dalyrymple), Head of Policy for Alzheimer Scotland, whose contributions in all areas of policy were particularly interesting. The work currently being implemented in Scotland represents a culmination of very high quality inclusive work through a number of different stakeholders.

I was also honoured to present two further research posters, which I had co-authored on the perception and identity of the G8 conference. 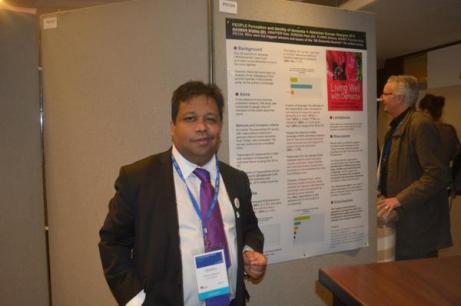 Chris Roberts (@mason4233) helped me with the poster session. It was in fact Chris who identified that the phrase “living well with dementia” was not used even once in the top 75 web articles on #G8dementia on Google, in about 44000 words odd.

All around the conference were people whose work is directly relevant to my book: for example Silke Kammer – on the arts and music – and Emma Killick (@RealEmmaKillick) who at the excellent MacIntyre leads on children and adults with learning disabilities and/or autism, but is clearly passionate about people with learning disabilities who later have further unaddressed needs on receiving a diagnosis of dementia.

It was terrific to bump into followers everywhere I went. It was great to meet Julie Christie (@juliechristie1) for the first time, whose work on resilience I am much interested in. It was also lovely to see Anna Tatton (@annatatton1) doing so well.

I am well aware of why the Scottish dementia nursing strategy, some say, has become the ‘envy of the world’. It was a huge privilege to meet in person Janice McAlister (@JaniceMcAlister), who was BJN Nurse of the Year Elderly Care 2013. In addition, I found the presentation by Hugh Masters (@HughCMasters), Associate Chief Nursing Officer for the Scottish Government, interesting for insights as to how England might improve its service too.

I happened to meet in the foyer of the Crowne Plaza on Monday night Ann Pascoe, @A_Carers_Voice, somebody who I have not only liked a lot on Twitter, but whose work on rural ‘dementia-friendly communities’ I have massively respected for some time.

Likewise, it was really nice to catch up with Caroline Bartle (@3SpiritUKNZ), who very kindly once did an infographic of my book ‘Living well with dementia’.

I met in the poster session Prof Mary Marshall to whom the Stirling School in design in dementia owes a huge amount. I owe a huge amount to Prof Marshall too, as the Notting Hill masterclass which I once attended got me first interested in this subject a few years ago (I had a long chat with Prof Marshall there.)

There were not idle tokenistic sops to people living with dementia, and their closest ones, in the whole conference. They were at all times integral to the fabric of the conference.

For example, the seating arrangements in the main Argyll conference suite reflected the special respect given to people with dementia and those closest to them.

The substance of the conference for the most part was of an exceptionally high standard in policy; there was next to no shilling of commercial projects.

The work from Alzheimer Scotland (@alzscot), including, predictably, the work focused on autonomy and dignity, and human rights, was showcased in an impressive way. Their work hangs together as a coherent, forceful narrative of meaningful significance for the Scottish jurisdiction.

In common with Scotland, England is trying to tackle hard the inappropriate use of antipsychotics. Dr Karim Saad (@KarimS3D) gave an excellent talk on this subject, drawing on recent findings from the ALCOVE2 study.

Scotland, in fairness, seems to be having less trouble with its policy than England is.

There was a very good sprinkling of cutting-edge research relevant to all practitioners in the field. 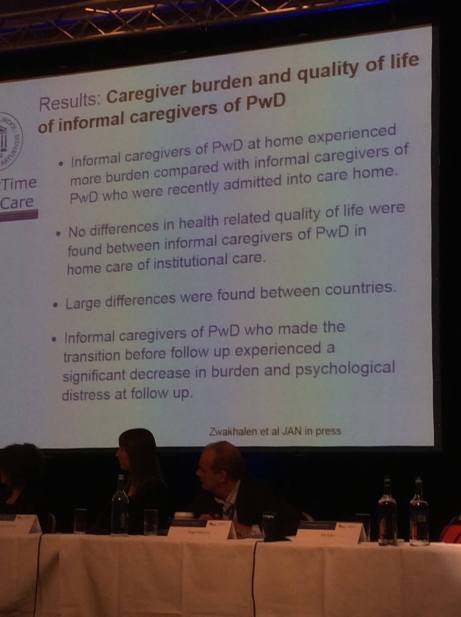 For me, the conference had the feeling of a happy wedding without any of the arguments.

Here are Agnes and Donna. 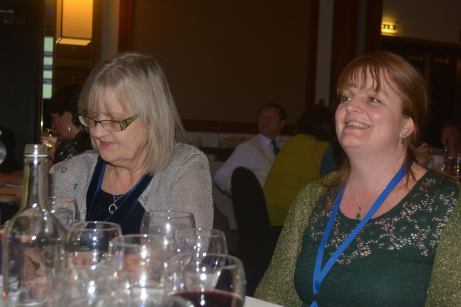 Whilst originally ‘unkeen’, I ended up having a wonderful time at the “Gala Dinner”. The entertainment – traditional Scottish music and dance – was amazing. 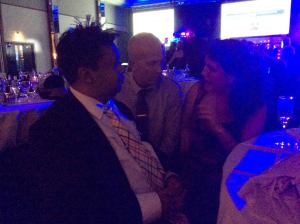 I was able to chat with Agnes and Nancy for some time. What a joy.

Elaine Hunter (@ElaineAHPmh) gave an excellent presentation on the transformative changes which had happened around the workforce in Scotland, including leadership from allied health professionals. 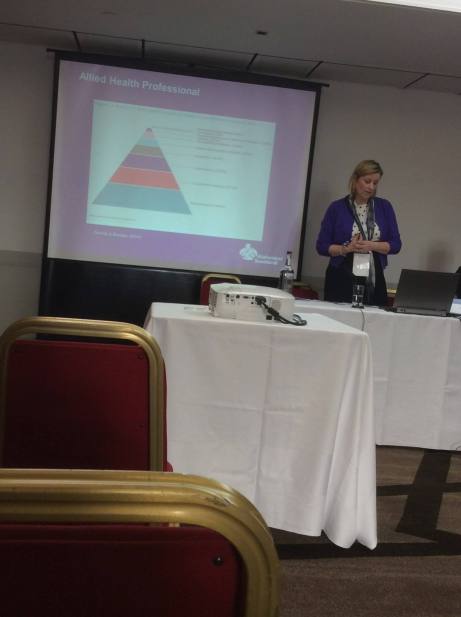 Without doubt, a skilled workforce for the provision of dementia services is essential, not gimmicks.

I consider Helga to be a true friend too. Meeting Helga was akin to being wowed by Lady Gaga.

I had last felt like this when I met Norman McNamara (@norrms) at the Queen Elizabeth II centre in London, Westminster.

I learnt a lot from the all-day workshop on building dementia friendly communities.

Over lunchtime, Joy Watson gave a brilliant ‘Dementia Friends’ (@DementiaFriends) session. I, in fact, was total awe as I am also a ‘Dementia Friends Champion’, and discovered many tips how to run my sessions in future!

This is a brilliant film exhibiting the passion which Joy puts into her Dementia Friends sessions.

Chris Roberts made time to hand out flyers for membership of the ‘Dementia Alliance International‘, an unique campaigning group run wholly by people living with dementia.

This Conference mapped topics clearly onto people living with dementia and caregivers, for which the organisers of this event must be heavily congratulated.

Next year’s Conference will be in Slovenia. I’ll be there! Bring it on! 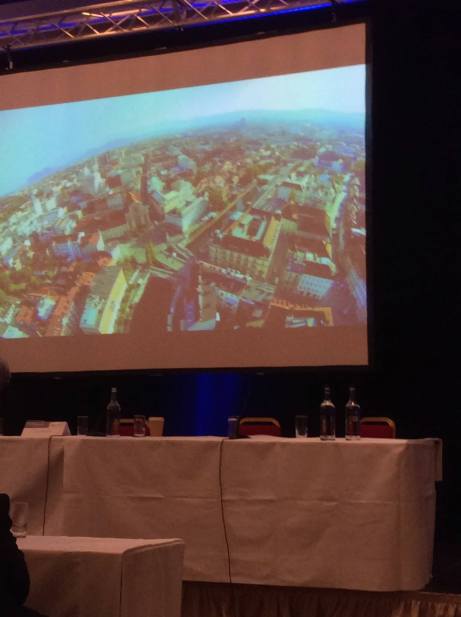