I am very honoured to become a Fellow with the England Centre for Practice Development this week. The work of this centre is very much up synchronous with mine. 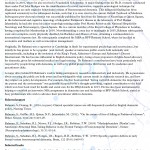 Dr Shibley Rahman became a Queen’s Scholar in 1987, and he graduated from the University of Cambridge in medicine in 2001, where he also received a Foundation Scholarship. A major finding from his Ph.D. research conducted there under Prof John Hodges was the identification of a novel, innovative, cognitive neurological technique for diagnosing at an early stage the behavioural variant of frontotemporal dementia. This influential finding has been replicated extensively in the subsequent decade, such that it is even cited in the current Oxford Textbook of Medicine. Subsequent post-doctoral research was successfully published by him from the Institute of Neurology at Queen Square, in the behavioural and cognitive neurology of idiopathic Parkinson’s disease in the laboratory of Prof Marjan Jahanshahi; he had also done his junior neurology training under Prof Martin Rossor at the National Hospital for Neurology and Neurosurgery, Queen Square. He is a current member of the Royal College of Physicians in London, having completed his Membership in 2005. Notwithstanding a coma due to meningitis in 2007, Rahman subsequently went onto complete, newly physically disabled, his Bachelor and Master of Law, obtaining a commendation in international corporate law. He subsequently completed his MBA at BPP Business School, where he excelled in economics and markets as well as innovation management.

Originally, Dr Rahman was a supervisor at Cambridge in finals for experimental psychology and neuroscience, but latterly he has grown to be a popular (and invited) speaker at numerous public events both nationally and internationally, including at the invitation of the King’s Fund, Alzheimer’s Europe and Alzheimer’s Disease International. He has become influential in English dementia policy, being a keen proponent of rights-based advocacy for dementia, given his substantial medical and legal training. Dr Rahman’s contributions have been particularly well respected by people living with dementia, as well as by global groups in the third sector and by academics and practitioners alike.

A major drive behind Dr Rahman’s work is doing participatory research collaboratively and inclusively. He is passionate about ensuring the public are both aware and knowledgeable what current trends in dementia research are, and how they impact on policy developments. For example, his first book entitled ‘Living well with dementia: the importance of the person and the environment” was generally accepted to be a thought-provoking, original contribution to the field which won best book award for health and social care for the BMJ Awards in 2015. He has also been instrumental in helping to establish an innovative MSc programme in dementia care and leadetship at BPP Health School, aimed at busy professionals who wish to advance their practitioner skills in dementia.