The independent Future Hospital Commission was established by the Royal College of Physicians in March 2012 to find solutions to the current challenges facing the NHS – a rising number of acute admissions, the increasing number of patients who are frail, old, or who have dementia, patients with increasingly complex illnesses, systemic failures of care, poor patient experience, and a medical workforce crisis.  The NHS leaflet on the 6Cs here. Even for the official 6Cs, powerful forces are at play in undermining the acute medical take. The ‘Good 6Cs’ can find themselves competing with the ‘Bad 6Cs’, which can determine the outcome of the acute general medical take. One year on after the publication of the last Francis Report on Mid Staffs, there appears to be common themes in what can go wrong. 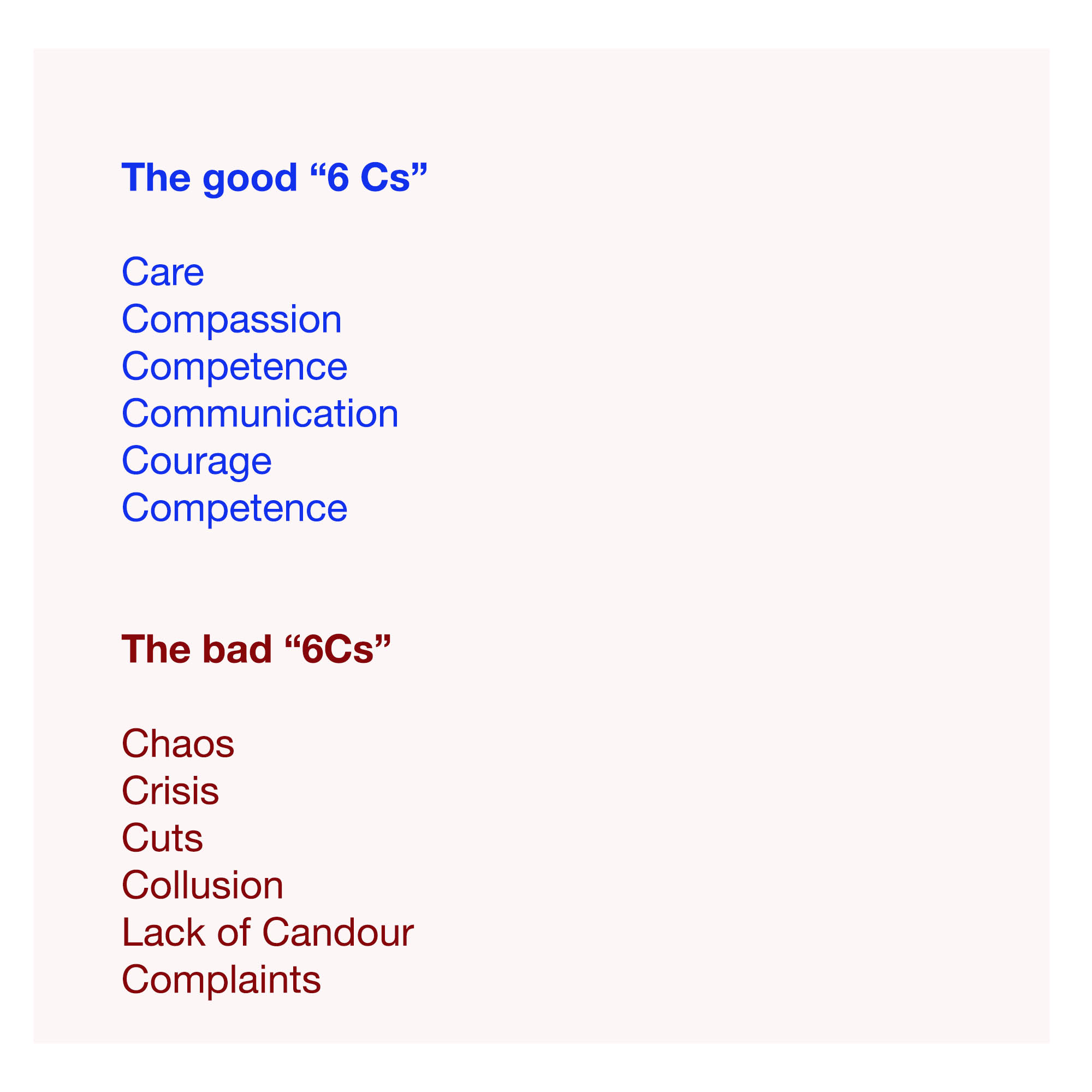 Care is described as a “core business”, perceiving each event with a patient as a transaction which is a potentially billable event.” Caring defines us and our work” indeed is true; as it defines to some extent how people get paid. Unfortunately, the way in which care goes wrong is pretty consistent in the narrative. For example, nurses may be too ‘posh’ to care. In this version, nurses who are too academic are incapable of caring for which there is little published evidence. The other more likely version is that junior nurses are “too rushed to care”. This is understandable, in that if there are ten people still waiting to be clerked in, it can be hard for all professionals to focus on taking a proper history and examination without cutting corners, for examination in completing an accurate neurological examination of the cranial nerves. However, the emergency room often cultivates a feeling of a conveyor belt, with a feeling of “Now serving number 5″. A patient experience is not going to be great if the doctor, nurse or AHP appears rushed in clerking in a patient. The patient feels more like they are in a sheep dip as “continuity of care” between different medical teams suffers.

“Compassion is how care is given through relationships based on empathy, respect and dignity.”  Again there is some irony in the same management consultants outfit recommending compassion by healthcare professionals, when the same professionals have recommended ‘efficiency savings’. Compassion in the NHS can of course be extremely difficult to deliver from the nurses remaining after there have been staff cuts, and the remaining nurses are having to work twice as fast ‘to beat the clock’, or a target such a “four hour target”.

“Competence means all those in caring roles must have the ability to understand an individual’s health and social needs.” This is of course is motherhood and apple pie stuff. The problem comes if the NHS ‘productivity’ is improved with lateral swapping of job rôles: that some functions are downgraded to other staff. Health care assistants might find themselves doing certain tasks which had been reserved for them. If there’s mission creep, the situation results of receptionists triaging a patient, rather a physician’s assistant doing a venflon. Competence of course cannot be delivered by untrained staff delivering an algorithm, as has been alleged for services such as NHS 111.

Communication is central to successful caring relationships and to effective team working. The overall “no decision about me without me” mantra of course has been made a mockery of, with unilateral variation of nursing and medical contracts (with adjustments to terms and conditions, and pay, of staff by NHS managers without any dialogue.) If you don’t communicate any errors in clinical care to the patient (reflected in the ‘lack of candour’ below), the patient and relatives are bound to leave with an unduly glossy version of events of the acute medical assessment. This can of course bias the outcome in the ‘Friends and Family Test’.

“Courage enables us to do the right thing for the people we care for, to speak up when we have concerns.” Take the situation where your Master (senior nurse) is wishing to implement a target, but you’re the one rushed off your feet with missing drug charts, no investigations ordered, no management plan formed as the patient was shunted out of A&E before the 4 hour bell started ringing? Are you therefore going to be able to speak out safely against your Master when your Master is the one who determines your promotion? If you’re made of strong stuff, and completely fastidious about patient safety, you might decide ‘enough is enough’ by whistleblowing. But the evidence is that whistleblowers still ultimately get ‘punished’ in some form or others.

“A commitment to our patients and populations should be the cornerstone of what we doctors, nurses, and allied healthcare professions do, especially in the “experience of the patients.””.  Of course, if you get a situation where junior staff are so demoralised, by media witch hunting, it could be that people are indeed driven out of the NHS for working for other providers, or even other countries. A commitment to the public sector ethos may have little truck if you’ve got more interest in ‘interoperability’, or ‘switching’, which are of course the buzzwords of introducing ‘competition’ into healthcare systems.

There can be some downright ‘yang Cs’ epitomising danger for the acute medical take and hospital.

If for the sake of hitting a target, drug charts aren’t written up, investigations not ordered, an inaccurate management plan produced, that is no victory at all. This can only lead to chaos later down the line for nursing teams for ‘receiving wards’.

When things get out of hand, some of the more hyperbolic allegations might conceivably happen. With people lose the plot, they are capable of anything. And if the system is too lean, and there’s a road traffic accident or other emergency, or there’s an outbreak of rotavirus amongst staff, there may be insufficient slack in the system to cope.

Whilst patient campaigners have been right to emphasise that it’s more of a case of safe staffing rather than a magical minimum number, there’s clearly a number of trained staff on any shift below which it’s clearly unsafe for the nurses to deliver good nursing care. Cuts in real terms, even if that’s the same budget (just) for an increased numbers in an elderly population, can of course be a great motivator for producing unstable staffing, as the Keogh 14 demonstrated. That might be especially tempting if ‘financially strained’ NHS FTs are trying to balance their budgets in light of PFI loan repayments.

This can affect a nurse’s ability to communicate problems with courage, if senior nurses are colluding with certain consultants in meeting targets. This means that medical consultants who are recipients of the non-existent drug charts, non-existent management plans, or non-existent investigation orders can probably take one or two weeks to ‘catch up’, but the ‘length of stay’ gets extended. Frontline staff can take the risks. But senior nurses can collude with the management to deliver ‘efficiency savings’ and promote themselves. That’s not fair is it?

This target-driven culture of the NHS, and excessive marketing of how wonderful things are, must stop.  A lack of honest communication with the patient through candour can lead to patients never knowing when things go wrong. This is a cultural issue, and it may be legislated upon at some point in the future. But without this cultural willingness by clinical staff to tell patients when things have unnecessarily got delayed through the missing drug charts etc., they will only get to know of things going badly wrong.

If things go badly wrong, they may generate complaints. These complaints may as such not matter if the system completely ignores complaints. For example, there has been only one successful judicial review against the PHSO since 1967. The recent review of the complaints process  for NHS England has revealed how faulty the process is. There has been criticism of the clinical regulators in their ability to enforce patient safety too, particularly in light of Mid Staffs.

As you can see, the system is delicately balanced. If transparency is the best disinfectant, it’s time to reveal the other six Cs for a start? The most important thing of course may be Culture, the 13th C.

Being number 13, it may be worse than unlucky for some.