Gillings rocked up in London in a pretty chirpy mood, it has to be said. 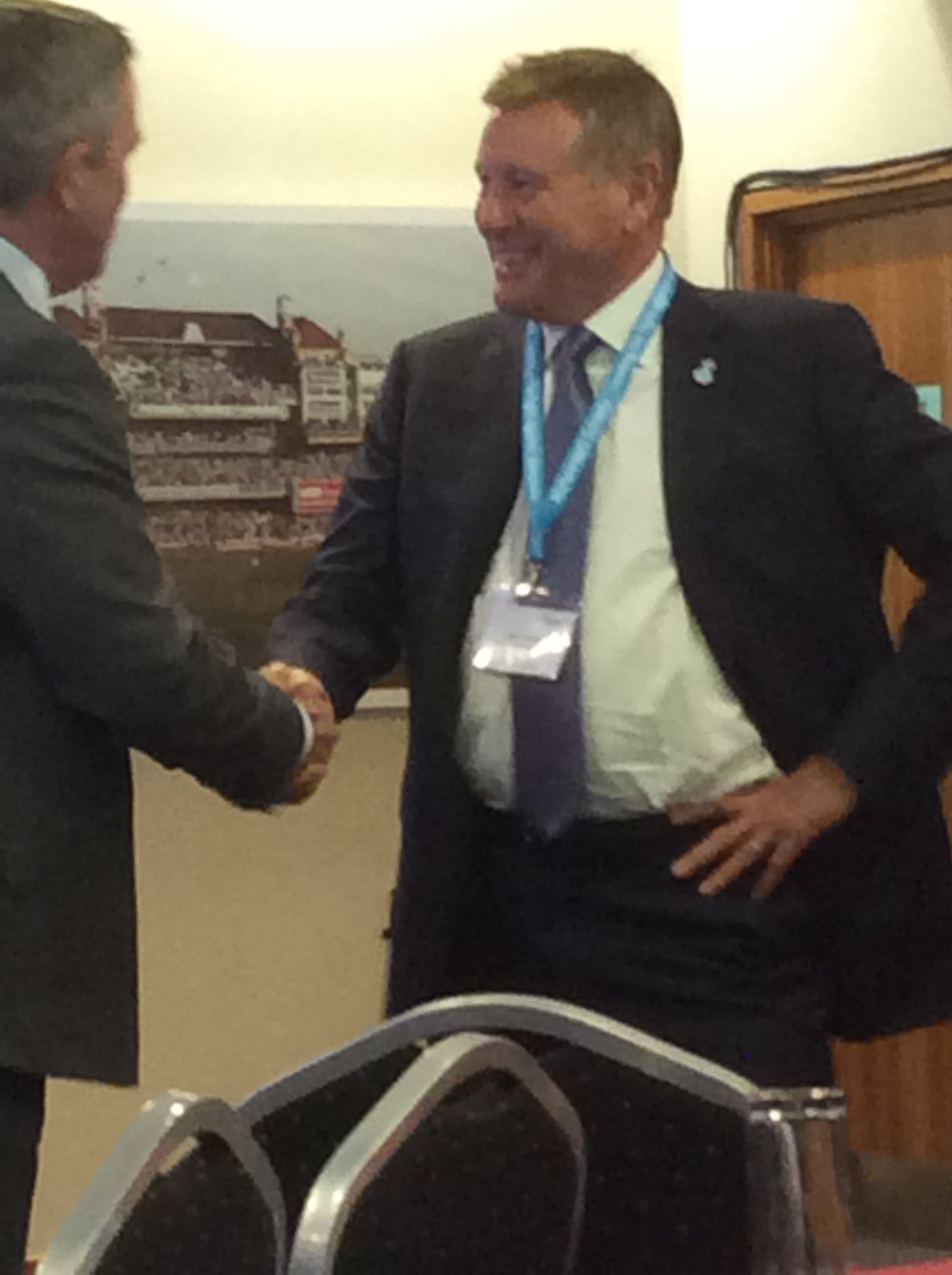 (please do cite the audioboo correctly if you wish to quote it.)

Dr Dennis Gillings gave one of the plenary talks yesterday at #Dementia2015, the annual conference of the Alzheimer’s Society. Gillings was appointed in February 2014, with the foundation of the World Dementia Council shortly thereafter. Following the main #G8dementia event, there have been four legacy events, in London, in Ottawa, in Tokyo, and in Washington DC. They have covered finance, partnering, care and research.

The G8dementia event talked about cure by 2025, but Gillings said he did not wish to get into the cure vs care debate. But the actual fact is that there is very little on care, and it is clear that the World Dementia Council feels that their mandate is to find a solution for delaying the onset of dementia. Their approach is “how to amplify the resources, such as technology and information, to make them more available and efficient.”

Gillings used the word “devastation” at one point. He later used the term “victims … if you call them victims”. This clearly offends the guidelines of his own country, on the use of language, for the use of language in dementia discourse, from Alzheimer’s Australia.

Gillings feels that he has built a momentum, and I completely agree with this. Whatever one thinks of David Cameron MP’s politics, or that of Jeremy Hunt MP, they showed formidable leadership, especially in galvanising a sympathetic media to drive for a ‘cure’ for dementia. The issue also is in England that social care monies have been reduced by about 30% in the last five years, leading social care to be on the knees.

Gillings talks euphemistically about risk reduction as an ‘untapped source’, and indeed we do know from the MRC CFAS study that primary care management of vascular risk factors is likely to have had an effect on reducing the prevalence of dementia in England in the last few decades. It is, however, possible to ‘over egg’ the risk factor pudding, as it’s currently thought that a sizeable number of dementias are, in fact, predominantly caused by non-modifiable risk factors.

There was report of a “Dementia Development Fund”, a £100 mn fund from the pharmaceutical industry. This is meant to cover looking at new therapies in the early stage. However, this poses problems with the “follow the money” argument. One will be right to be mindful of his comment that, “I have a corporate side to me, so we are heavily involved in the trials and clinical trials.” We desperately do need high quality research in what might cause people to live better with dementia, and there’s a lot of them about – 47 million globally in fact.

The World Dementia Council is to be reconstituted, with a ‘nominations committee’ so people can actually now be nominated to the World Dementia Council. The democratic right of people with dementia to be elected in such organisations is incredibly important, as I have long argued. Article 29 of the United Nations Convention on Rights with Dementia enshrines this, and dementia is a disability.

Gillings feels that there is cause for optimism. “I don’t want people to think that cure will necessarily involve taking a pill”. It is quite unclear what he means by this – this might mean that the ‘cure’ might be entirely preventive through non-drug means (highly unlikely), or that the drug or combinations of drugs might be administered through another route, such as intramuscular, intravenous or subcutaneous.

This all leads onto Richard Taylor PhD’s fundamental question of ‘what will a cure for dementia look like?’ Could this literally mean a vaccine to stop the population acquiring dementia? Such an approach has been taken, for example, in the ‘cure’ for cervical cancer in targeting the human papilloma virus, based on seminal research done at Cambridge. A number of international charities talk openly about ‘ending dementia’, and a ‘world free of dementia’. This of course sits uneasily with the 47 million of people living with dementia, who do not wish their lives to be perceived as in any way ‘substandard’, or to be ignored.

Gillings talks of how ‘neuronal pathways will have to be relearned’ through drugs ‘or by some other means’. This idea based on neuronal plasticity means that there might be some boosting of neuronal pathways, once the damage has somehow been stabilised. It’s already felt anecdotally by some, including myself, that people living better with dementia, who regularly use social networking sites and keep themselves active meeting people through speaking, blogging or whatever, somehow build up a resilience against further progress of the dementia condition. This of course has never been subject to a randomised control trial, or other scientific method. And nor is it likely to be with resource allocations so heavily biased towards molecular neuroscience and translationary medicine. We similarly have a relative dearth of research looking at the efficacy of ‘social interventions’, which might be ‘prescribed’ in future, such as music.

In March 2015, 93 nations attended a conference convened, and signed up to a ‘Call to Action’. This momentum is incredibly important ‘to generate cures and improved pathways for care’, for developed and developing countries. But Gillings is right to bring up the notion that, even if the new curative drugs get approved, will they be widely available?

I agree with Gillings that there is unlikely to be one big bang ‘cure for dementia’. In the cancers, there has been an incremental development in the cures for different types of cancer. Earlier this year, news of a successful monoclonal antibody for malignant melanoma was widely discussed in the scientific journals and mainstream media. Also earlier this year, it was reported that 25 cancer drugs would be ‘denied’ on the NHS. The concern would be that, if the NHS is relentless in pursuing £22 bn ‘efficiency savings’, a cure for dementia would fast be removed from the agenda quicker than a plaque might be removed from a person with Alzheimer’s disease.

In the UK, investment in research has ‘doubled in the last several years’, and is set to be maintained in the years to 2020. The differences between US and UK budgets are easily understood in terms of size – $650 mn in the US, compared to £60 mn ‘level’ of the UK. But we do need a careful look at the breakdown of the types of research we are investing in globally. If a cure comes it will be truly be wonderful, but we also have a strong moral obligation to the 47 million people around the world living better with dementia.

Jeremy Hughes, the formidable CEO of the Alzheimer’s Society, urged the audience of the annual Alzheimer’s Society to be see the World Dementia Council as a ‘critical friend’ (and supporter) of all stakeholders. But likewise, I feel that we in the research community need to be a critical friend of the World Dementia Council. And it is imperative that other influential world stakeholder groups, such as the Dementia Alliance International, advocacy by  and for people living with dementia, become ‘critical friends’ too?