On February 23rd 2015, I travelled down with Chris Roberts and Jayne Goodrick to see Tommy Whitelaw speak at Goodmayes Hospital. Tommy had been invited by the @BHRUT_Dementia team.

We only just made it in time.

Barking, Havering and Redbridge University Hospitals NHS Trust operates across two main sites at Queen’s and King George hospitals serving a population of around 700,000 from a wide range of social and ethnic groups, making it one of the largest acute hospital trusts in England. 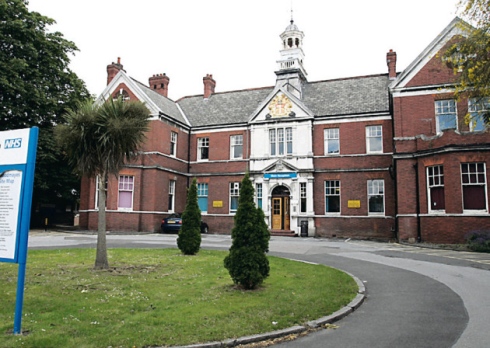 I was very impressed by another introductory talk by Matthew Hopkins, the Chief Executive. Matthew (@M_J_Hopkins) has gone via Addenbrooke’s Hospital where I indeed was a junior house officer in general medicine on Prof Tim Cox’s firm.

I truly found Tommy’s talk inspiring. I know Tommy will have given the talk many times, but it gave it his all. It must be emotionally exhilarating for Tommy to retrace these steps.

What I particularly found inspirational about Tommy’s talk was how it will remind individuals in the NHS and care workforce what is important; care for real people rather than anonymous patients. I strongly believe in the notion of personhood, that everyone is fashioned by his or her past and present, and environment including relationships and wider environment.

“Person centred care” is a over-rehearsed phrase, but Tommy’s approach is one of great power.

I explained in my comment that I did not wish to bombard the event with policy. When members of the public think about the wider economy, they tend to be less interested in the mechanics behind the GDP figures, but more concerned how the economy might relate to a zero-hours contract or standard of living.

Similarly, I don’t think it’s helpful to be bogged down in a morass of policy detail. People are people.

But it does happen that Tommy does raise wider issues in general. Everyone has a life story for example. As Tommy explains, his mother had unmet needs; and the subtext here is that Joan did not want to go into residential care, so it is important to have her needs addressed.

Tommy did in the end find support from a medical consultant and a district nurse. Quite often whom you meet can totally alter the nature of your personal experiences about a situation.

Tommy would be the first to explain that he felt relatively under-prepared for the caring rôle he would ultimately take in looking after Joan; this is not unusual with many caregivers not thinking of themselves as ‘caregivers’, and often wondering whether they’re doing things right.

But people like Tommy, I feel, are not only doing things right but doing the right things. This means that Tommy is not just managing the situation with Joan, but he is showing true leadership.

The law looks behind the substance behind the name. That many thousands have given personal pledges for Tommy, including the Chief Nursing Officer Jane Cummings, means that Tommy has created a highly formidable social movement.

Tommy Whitelaw: “No one asked”