For those of you who haven’t seen it, this is Norman’s statement from this morning on Facebook.

Yesterday was a hard day for many reasons, but i stood my ground!!And On more than one occasion !!!!. I was questioned about the GPS Systems, the ethics of it and how many people we will reach and are reaching now. Questions were raised about how some people thought the Purple Angel campaign was just a one man band and will fizzle out after my demise (Their words not mine!!) and the locality of the reach we have!!

This hurt as i felt it was undermining all the great work you have done around the world, something they are having trouble grasping!! Being as protective of you all as i am, i let them know, in no uncertain terms how STRONG we are, how BIG we are and how our Arms all reach around the globe in complete unison and that i will not, or will ever, have people talking (Gossiping) about something they quite clearly no nothing about!!!

Days like this will come, i know this, and i can deal with it without favour or fortune ( i fight a bigger battle of my own as you well know) but please know i will always defend the work we do , you do, and everybody does in this wonderful organisation. For all who like a bit of a read this is what i wrote in my feed back to all attendees yesterday when i arrived home last night, much love to all and always remember
“Together We Are Strong”
XXXX

Good evening all, just a little feedback from todays meeting. As a person “Living with Dementia” can i just say a huge thank you to each and every one of you for your attendance today under such difficult circumstances regarding the weather.

Now, onto my feedback, after the “Lively” discussion Ian Sheriff and myself had regarding the locality of what we do under the banner of the Purple Angel Campaign i would just like to clear a couple of things up. As much as Ian pressed what we do is a local thing just in Torbay, nothing could be further from the truth.

The Purple Angel Campaign is a Global movement with over 100 Dementia Ambassadoors worldwide. We have huge swathes of the UK covered and reading the material we provide for free, the links at the bottom of this e mail me show just this. The Urban MYTH that all this will collapse when i become worse is just that, and URBAN MYTH. We have Succession protocols in place and not only that the 100 ambassadors i talk about the majority also have their own teams to take this forward when i am long gone. I will say passionately, that whilst others have been discussing this, talking about oty for months and the ethics of it, doing research will last months and months, we have just got on with it and got the job done, and in the process of carry on doing so.

As for the GPS `s being a local thing, this is also UNTRUE!! The call centre in Torbay is now a NATIONAL CALL Centre for the whole of the uk. The GPS`s are being posted to those who request them from the 1st of Feb 2014 and are being activated ALL over the UK as we speak. They will begin to save lives The call centre employees are all ex Dr`s, Nurses, Firemen and paramedics who are all versed in Triage and emergency situations !! All protocols have been passed by the NHS and devised by Devon and Cornwall police. How other forces respond will have to be worked out at their own local level but these are now “LIVE and “Active ” across the UK

Without having what we call a sideways dig at anybody, the Alzheimers society are not the Dementia police and are not the only ones who can make a difference to people with dementia and their carers!! And certainly not everything has to be okayed by them. I was so happy to have the support there today of my fellow Purple Angel dementia ambassador Hilary Cragg who is also a solicitor and i was only to happy to hear that she also is mystified by the “Ethics ” argument regarding GPS SYstems. Nobody is forcing these on anybody, and if anybody gets to the late stage where they aren’t responsible to say yes or no then there is usually a Power of attorney involved or a need for care, it really is as simple as that and its the media and the general public who are making hard work of it as usual!!

That said we dont have to PROVE to anybody what we are doing, and whatever the outcome will just carry on doing what we do best. The invitation to ALL of you is here to ask any questions you want too and our offer of help still stands to all who need it. I hope the weekend is a lot kinder to you than it was to us all today.

I would like to make a brief statement on this status.

I have met Norman and Elaine: 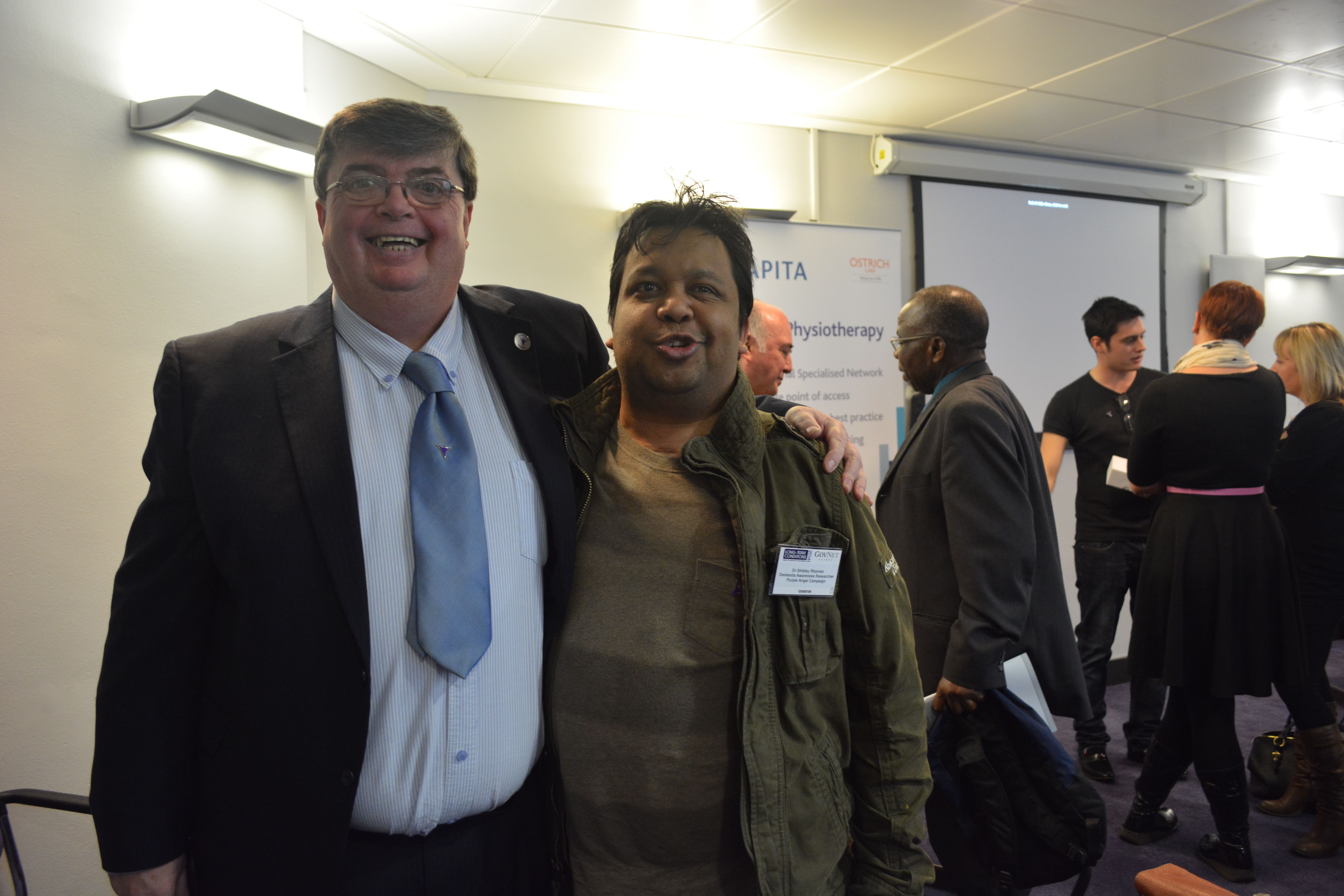 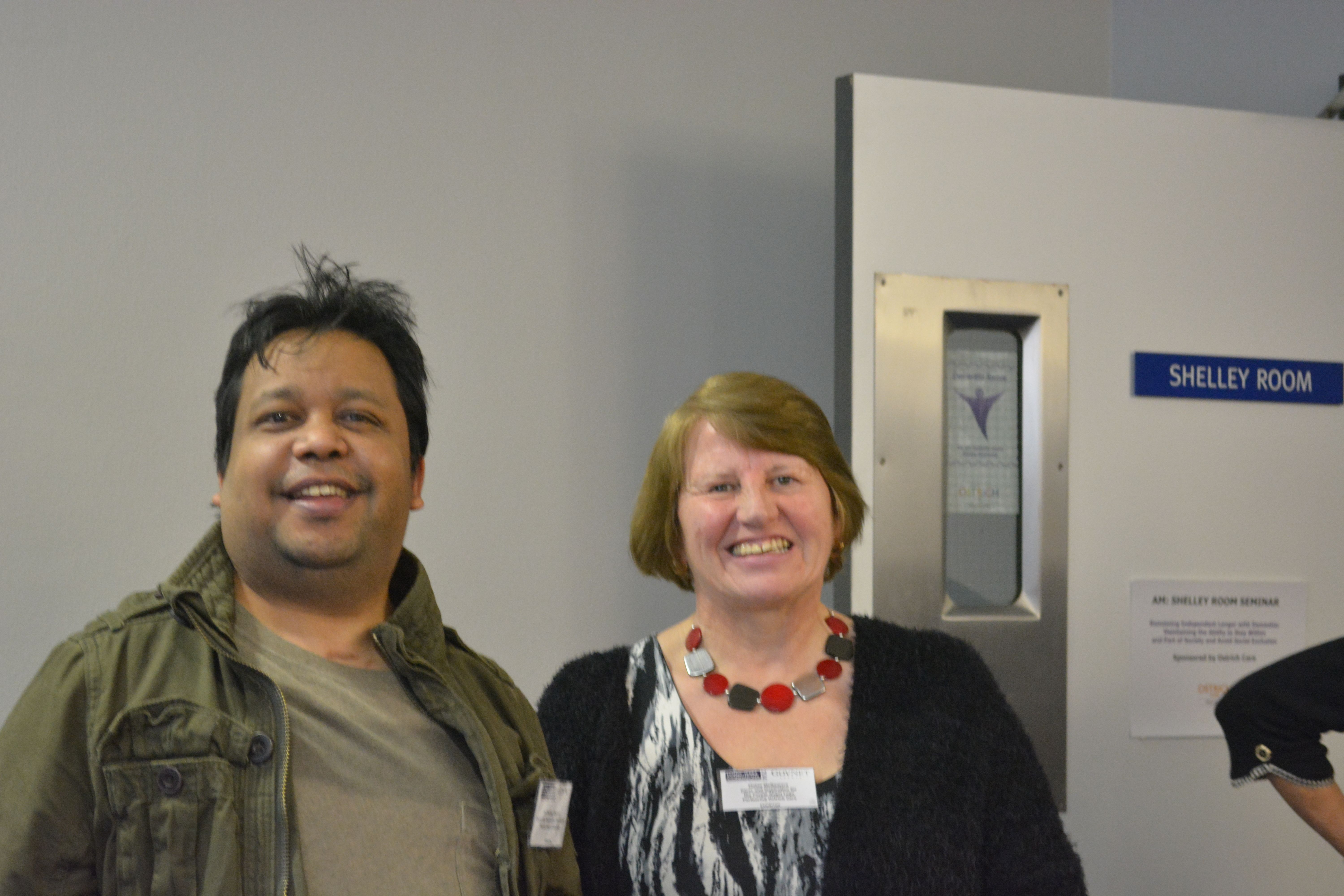 The idea that Norman is a ‘one man band’ is science fiction.

My personal Facebook is populated full of ‘Purple Angels’ who genuinely adore Norman.

Norman is in fact what management gurus would call a ‘charismatic leader’. This means that he has a vision; he has followers; he’s communicating his vision; and followers believe in his vision.

I think it’s very difficult to find a more relevant stakeholder opinion that that of the person living with dementia.

I think, in fact, and many agree with me, as an academic who has devoted a lifetime to dementia, that they should be at the heart of all service provision decisions about strategy.

I also think they should shape the direction and tactics of our global research strategy.

If anyone would like to discuss with me rationally the ethics and law of wandering mitigation, I am happy to do so. I am a member of the World Neuroethics Society, and have been awarded my Master of Law from the University of Law here in London.

Using words such as ‘demise’ can only be hurtful. As somebody who had a cardiac arrest in 2007, I should like to remind people that anything can happen to anyone at any time.

My aspiration to make life better for those living with dementia has been obstructed by much promotion and spin from those people who have pursuing their own agenda often with a cruel aggression. I salute Norman and his Purple Angels for standing his ground.

All I can say to Norman is that at first they ignore you, then they try to discredit you, and then they attack you.

Norman’s reaction yesterday confirms for me only one thing.

That Norman and Elaine, and the Purple Angels, have in fact won the “battle”. And thanks to them we have made huge advances in promoting living well with dementia.