Dementia 2012, the first in a series of annual reports from the Alzheimer’s Society, described how well people are living with dementia in 2012 in England, Wales and Northern Ireland.

According to page v of the ‘Executive Summary’. the sample comprised a YouGov poll in December 2011 involving 2070 individuals, but also “drew on existing research and current work”, and polling done by the Society with people in the early stages of dementia in a survey distributed through the Society’s support workers in England, Wales and Northern Ireland. A number for this last group is not stipulated. It is unclear how large the cumulative sample is for each of the key findings, therefore.

This work helps to provide a slide of the key findings underpinning the need for ‘Dementia Friends’, an Alzheimer’s Society and Public Health initiative. For example, one such slide from a presentation available on the internet is: 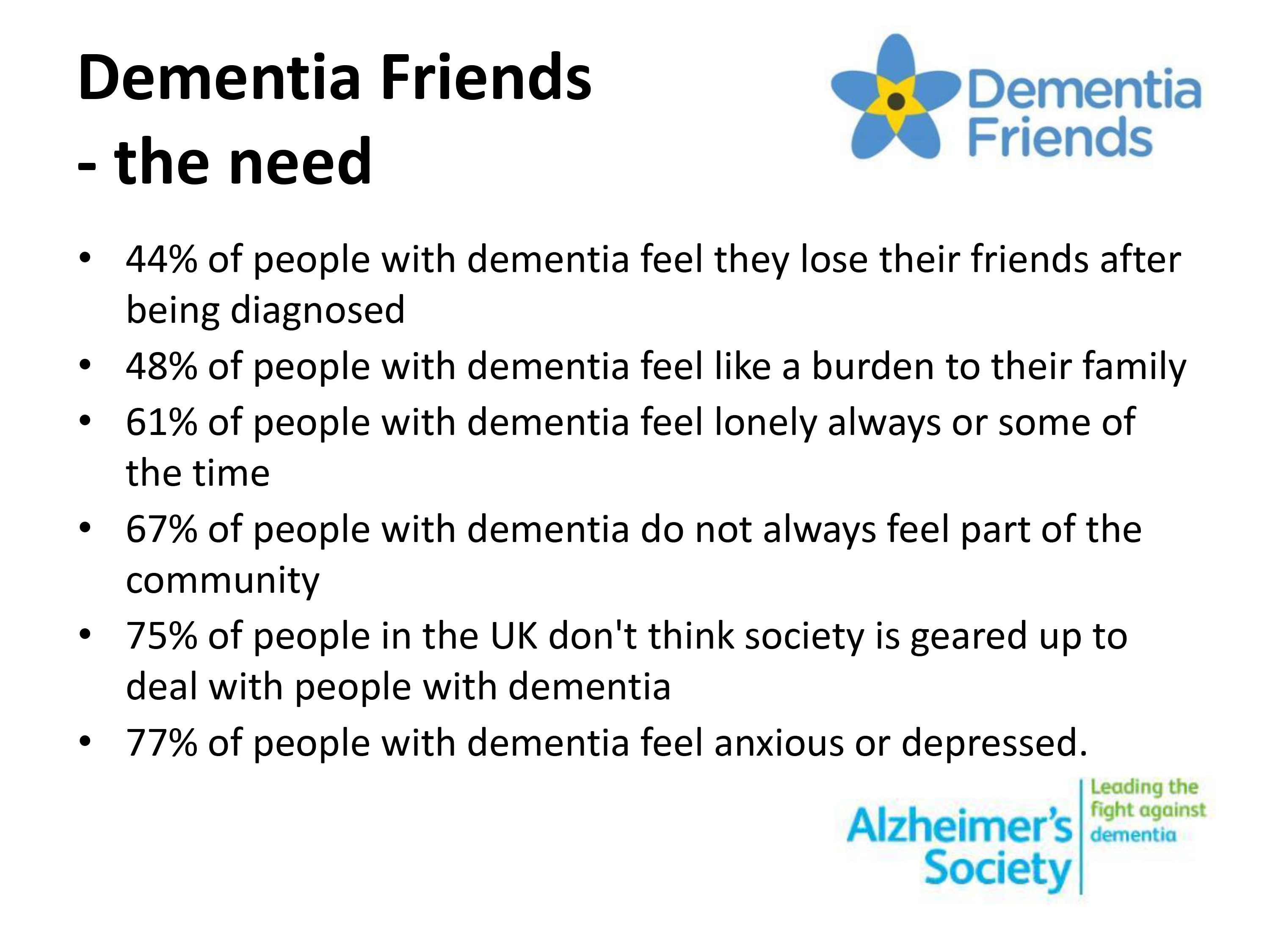 In detail the findings reported are as follows.

When asked if they lost friends after their diagnosis of dementia 12% of respondents said yes, most of them, 28% said yes, some of them, and 47% said no.

4% of respondents reported that they haven’t told their friends and 5% didn’t know.

Should we surprised if “44% of people with dementia feel they lose their friends after being diagnosed?”

I remember when I became disabled and went into recovery from severe alcohol dependence syndrome at the same time. Employment was far from my mind. At the time, my friends circle did severely contract, but I should like to think that the friends I am left with are not superficial friends. They are people I suspect would’ve stuck with me through thick and thin anyway.

They are not ‘judgmental’.

Receiving a diagnosis of dementia is not like receiving a criminal conviction. Norman McNamara once joked with me saying he had not been ‘convicted of dementia’ in explaining why he preferred the term ‘GPS trackers’ to ‘GPS tagging’, as a mitigation against wandering.

When I was at the first Alzheimer’s Show in London earlier this year, I met the wife of someone who had received a diagnosis if dementia, and they had not told their friends of their diagnosis for about years.

I suppose that if you have mild memory symptoms as a feature of Alzheimer’s disease, you might not need to tell people that you have a diagnosis, in the same way that you might have an indwelling catheter for multiple sclerosis.

The memory loss may not be immediately obvious.

But this is part of my overall criticism of ‘dementia friendly communities’ – to be ‘friendly’ to people living with dementia, howsoever that is defined, you need to identify such individuals reasonably reliably. I do not buy into this ‘if you see an old biddy have a difficulty, think they might dementia'; particularly since dementia is not confined to older people.

The statistic “44% of people with dementia feel they lose their friends after being diagnosed” becomes even more complicated once you consider various factors which impact upon this finding potentially.

How deep was the friendship in the first place?

And of course what type of dementia? Frontal dementia (behavioural variant frontotemporal dementia) is reasonably common in  the younger age group epitomised by progressive behavioural and personality changes.

The thing about this condition, however, is that the person with dementia very often has little or no insight into his change in personality (with the presentation having been noticed by a close friend, or even husband/wife).

Also another feature of conditions affecting the frontal lobes (the part of the brain near the very front of the head) is that such people with problems with the frontal lobe can be extremely bad at making ‘cognitive estimates’.

This was first shown by Prof Tim Shallice and colleagues in the late 1970s: e.g. “how many lamp posts are there on the M1?” “Forty.”

And in the presentation of behavioural variant frontotemporal dementia, it could be obvious to friends that something might be happening as your personality was changing. Therefore, in this scenario, it might be reasonably foreseeable that friends drift away.

Why should people who were friends no longer be bothered? One reason is that ‘they don’t want the hassle’. Maybe staying friends might at later stage involve some sort of requested financial support? Or maybe the former friends don’t want to be involved in ‘uncomfortable discussions’ about dementia?

This is indeed where an initiative to recruit one million ‘Dementia Friends’ through information sessions are useful to dispel the myths and prejudice, as mitigation against stigma and discrimination?

But one of the outcomes which ‘Dementia Friends’ will have to evaluate is whether this project encourages people to ‘befriend’ people with dementia. It is not a mandatory outcome, although people are encouraged to think of this as one of the possible commitments/actions from the information session.

In Japan, befriending has been a successful policy, but the entire care system is much more convincing than our one which has been starved of funds in parallel with Dementia Friends receiving its funding from the Department of Health and Social Care Fund.

But, anyway, would one necessarily expect the friends that one has lost through disclosing a diagnosis of dementia to be matched by friends obtained through ‘Dementia Friends’ in terms of quality? It is of course impossible to answer this question.

This topic is of course closely entwined with the subject of the 2013 report on loneliness. Encouraging participation in wider networks including social networks such as Facebook and Twitter can in the real world help to overcome this.

But with leading politicians continuing to use words such as “horrific”, “evil”, “devastating” in relation to dementia, is it any wonder that, whatever other initiatives, people who have received a diagnosis of dementia are resistant to tell their friends because of the potential reaction?

The statistic “44% of people with dementia feel they lose their friends after being diagnosed” sounds like a typical fundraising slogan, and indeed can be used to justify a national project such as ‘Dementia Friends’.

The proof of the pudding comes in the eating. Will a significantly fewer number feel that they lose friends after being diagnosed (whether they actually lose friends) as a result of “Dementia Friends”? Whilst, as I have explored elsewhere, there is a lot to commend ‘Dementia Friends’, I think it would be wrong to raise this expectation.

And if a significantly fewer number do not feel that they lose friends after being diagnosed, despite “Dementia Friends”, it would be interesting to explore further why. For example, it could be that there are fewer home visits by health professionals, although it is normally argued that ‘anyone who needs a home visit gets one’.

The statistic though acts a useful cover for a quite sinister discussion.