On 8 November 2012, it was announced from a Department of Health press release,

“The Dementia Friends scheme is the country’s biggest ever project to change the way people think about dementia.”

“By 2015, 1 million people will become Dementia Friends. The £2.4 million programme is funded by the Social Fund and the Department of Health. The scheme has been launched in England today and the Alzheimer’s Society is hoping to extend it to the rest of the UK soon.Each Dementia Friend will be awarded a forget-me-not badge, to show that they know about dementia. The same forget-me-not symbol will also be used to recognise organisations and communities that are dementia friendly. The Alzheimer’s Society will release more details in the spring about what communities and organisations will need to do to be able to display it.”

The campaign slots in very well to an infrastructure which acts as a safe ecosystem to promote “Dementia Friends”. The support of Government in this in allowing mechanisms of marketing, such as press releases, as well as resources, e.g.. for marketing campaigns, here is invaluable. A clear policy problem arises here as to whether it is the Alzheimer’s Society and “Dementia Friends”, or the concept which has a longstanding global policy footing.

To help understanding how corporate culture works, the “Cultural Web” came about.

The Cultural Web, developed by Gerry Johnson and Kevan Scholes in 1992, provides an approach for looking at and changing your organization’s culture. Using it, you can expose cultural assumptions and practices, and set to work aligning organizational elements with one another, and with your strategy.

The Cultural Web identifies six interrelated elements that help to make up what Johnson and Scholes call the “paradigm” – the pattern or model – of the work environment. By analysing the factors in each, it is claimed that you can begin to see the bigger picture of your culture: what is working, what isn’t working, and what needs to be changed. 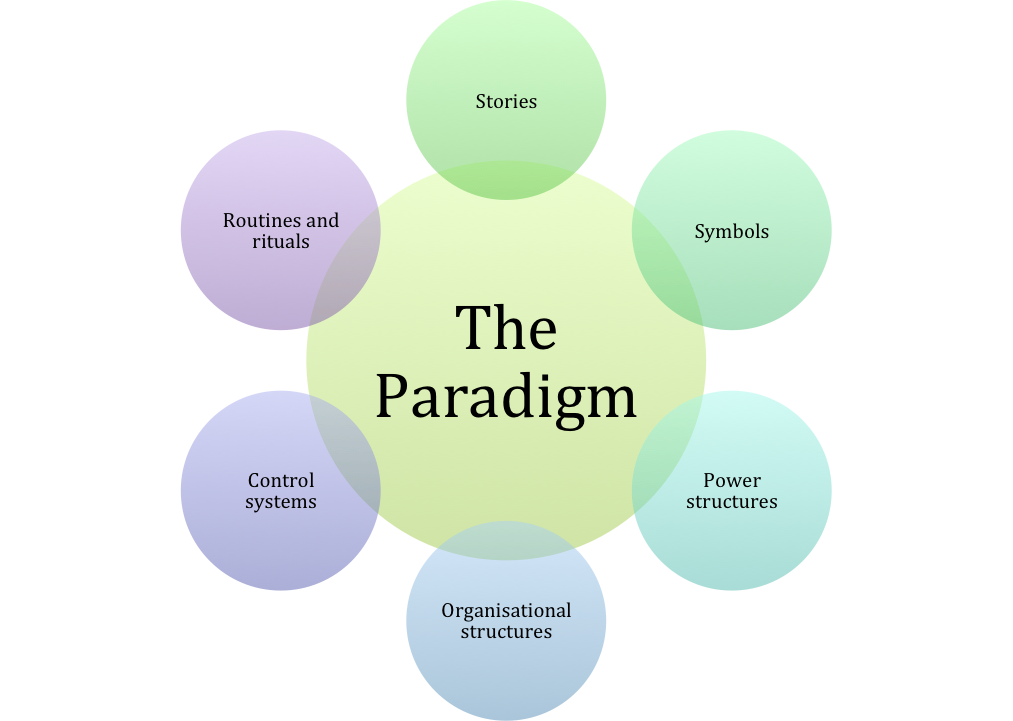 But actually you can easily see how a corporate approach is supporting the methodology of ‘Dementia Friends’. Rather than it being an ‘organic movement’, it is a highly orchestated and organised example of a marketing campaign fitting of any large corporate.

The six elements are:

The past events and people talked about inside and outside the company. Who and what the company chooses to immortalise says a great deal about what it values, and perceives as great behaviour.

“Who decides what is great behaviour” is clearly a thorny issue.

It can be rather judgmental to consider what is a worthy community initiative, and what isn’t. Such an initiative can therefore potentially be incredibly divisive.

One of the vehicles which can be used for this is the “Dementia Friends Awards” ceremony to be held on Tuesday May 20th 2014:

“In March 2012 the Prime Minister issued a national challenge on dementia – one of the key aspects of the challenge is creating dementia-friendly communities. Since then communities, individuals and organisations have all risen to the challenge and made Britain a better place for people with dementia. From local shops to large cities, buses to banks; we have heard so many inspirational stories of people and organisations making changes that help people living with dementia and carers in their communities. To celebrate all the hard work happening, we are holding the first Dementia Friendly Awards, sponsored by Lloyds Banking Group and supported by The Telegraph. The Awards recognise communities, organisations and individuals who have helped to make their area more dementia-friendly. This year the awards were open to entries from England only.”

“Awards ceremonies” form official recognition of the control systems too, as well as producing great marketing around an event.

It might seem rather dubious to ‘pick winners’, in that there will inevitably be ‘disappointed losers’ who do not ‘make the grade’, but the idea is to generate lots of positive publicity for the people involved and the sponsors, as well as for the Alzheimer’s Society obviously.

The daily behaviour and actions of people that signal acceptable behaviour. This determines what is expected to happen in given situations, and what is valued by management.

The visual representations of the company including logos, how plush the offices are, and the formal or informal dress codes.

The new “forget-me-not symbol” was launched on 8 November 2012, “embodying the UK’s social movement on dementia”.

There are certain restrictions on the use of this symbol regarding exclusivity (e.g. whether you’ve  done on the course but gone onto wish to do your dementia awareness course without the use of the branding).

It is a monopoly trademark right, as demonstrated in its registration across an excessively high number of intellectual property classes on the UK trademark register.

However, “Dementia Friends”, many at the coalface feel, is a rather contrived movement with so much money being pumped behind it to force it to succeed.

When you enrol onto the “Dementia friends” website, there’s a mechanism by which you can receive your ‘Dementia Friends’ badge:

And the amount of free advertising that MPs can give for this is incredible.

David Cameron MP, Prime Minister, even mentioned a giant forget-me-not emblem lighting up the ‘0’ of ’10’ Downing Street in Prime Minister’s Questions this Wednesday. Frequent name-dropping of this badge occurs in parliament by MPs as free advertising.

“I pay tribute to my right hon. Friend for raising this issue. We have turned the zero on No. 10 into the dementia flower today to help to boost the importance of raising awareness of this issue and of encouraging more people to train as Dementia Friends.”

Such an initiative is great for the current administration which can paper over the cracks and terrible shortfalls in social care for dementia.

And marketing is a wonderful thing.

A lot of money, it seems, has been diverted from frontline care into making this project succeed.

The current Government were known to be pitching for professional marketing of ‘Dementia Friends’ last year. Agencies on the Government’s creative roster attended a briefing with the Health Secretary, Jeremy Hunt, on Wednesday (9 October). The campaign was aimed at promoting the concept of dementia friendship, and it would also encourage people to join Dementia Friends, an initiative run by Alzheimer’s Society to improve public understanding.

It is reported that Public Health England would invest up to £4 million a year until 2014/15 and expects significant additional funding from partnership marketing. “The scale of the challenge demands far greater ubiquity than we alone can fund,” a PHE spokeswoman said. The campaign was due to break in March 2014, with pitches will be held on 7 and 8 November and an agency will be selected by the end of that month.

In the latest video, celebrities star in a new advert to encourage people to become “dementia friends” to help boost volunteering, education and support for the growing number of people with the condition.They join up to sing a classic Beatles song to raise awareness of the isolation felt by those living with Alzheimer’s. The Dementia Friends campaign features Lily Allen, Chris Martin, Eamonn Holmes, Simon Pegg, Paul O’Grady, Sir Terry Pratchett, and many more all singing the track With A Little Help From My Friends.

This includes both the structure defined by the organisation chart, and the unwritten lines of power and influence that indicate whose contributions are most valued. The Dementia Friendly Communities programme at the Alzheimer’s Society has its Manager.

In January 2012, it was announced that a man in the early stages of Dementia wants his home town of Torbay in Devon to become “dementia friendly”.

Norman McNamara, a member of Torbay Dementia Action Alliance (TBAA), wants shops and businesses to recognise signs of the condition and to help local customers. In the meantime, he has gone onto build a massive genuine social movement, called the “Purple Angels”.

Their efforts are longstanding. And outstanding. 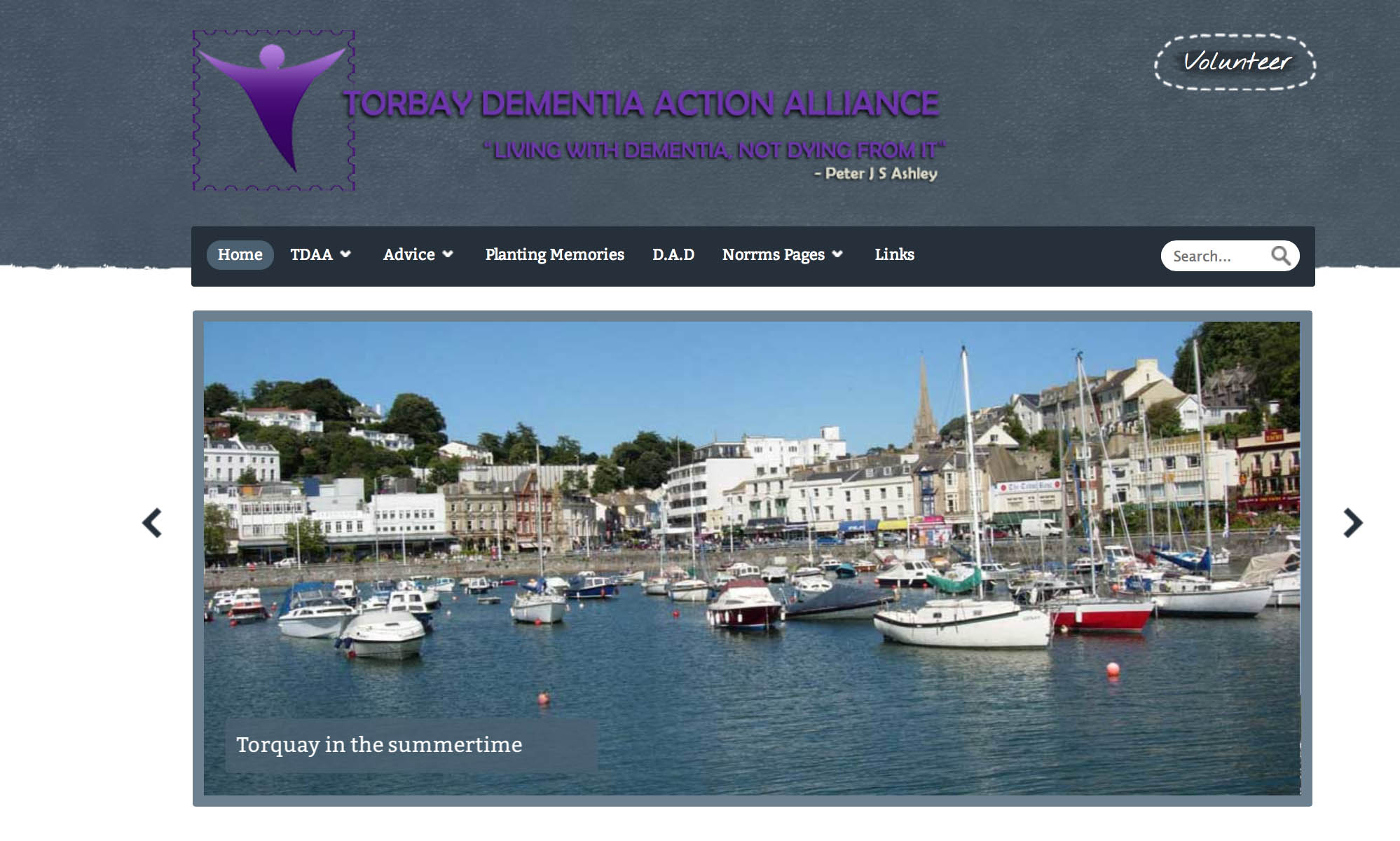 But on page 10 of the latest missive (update on progress on the Prime Minister’s Dementia Challenge), Torbay does not even make the grade. 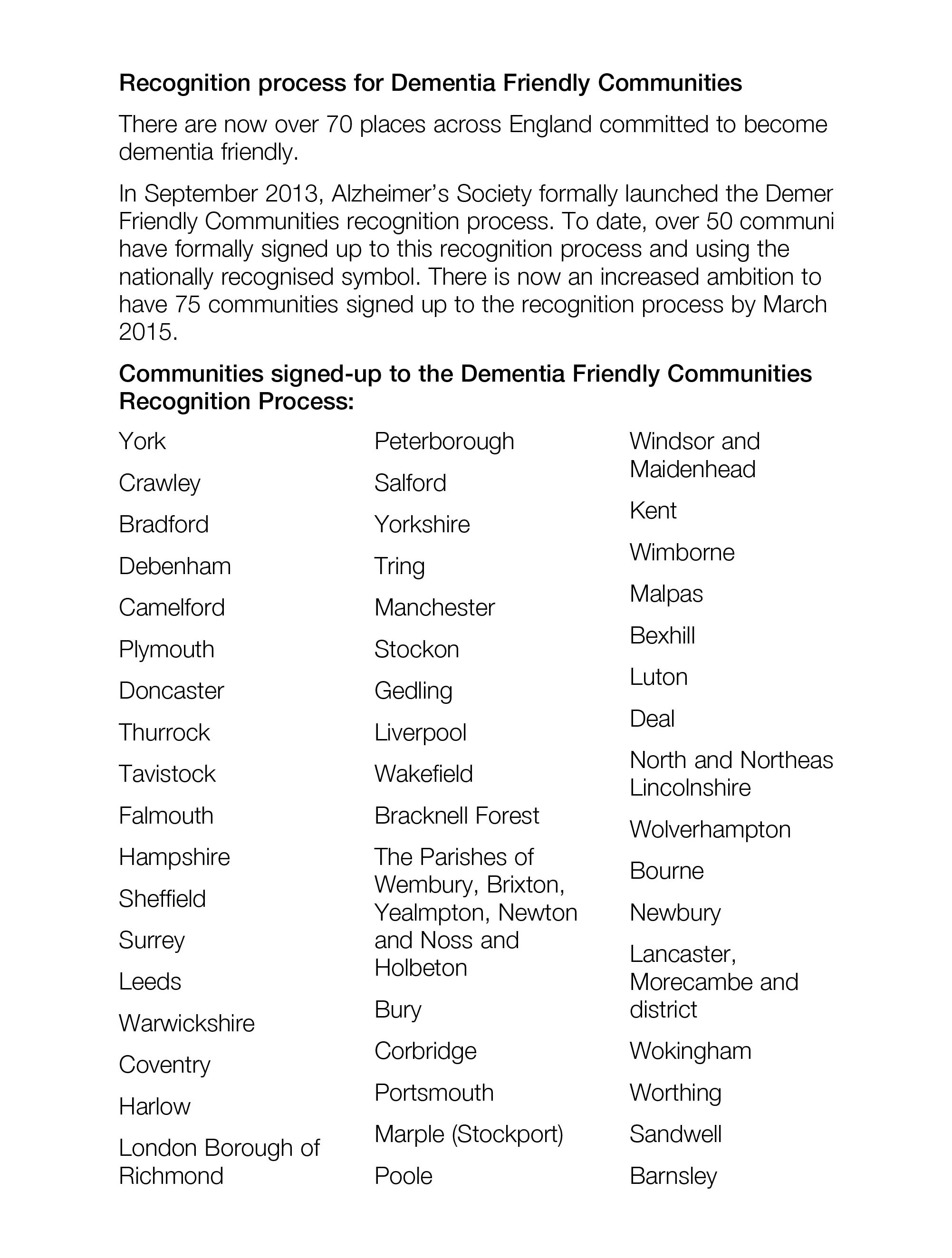 This is particularly odd given that here is Norman McNamara even pictured with the Prime Minister: 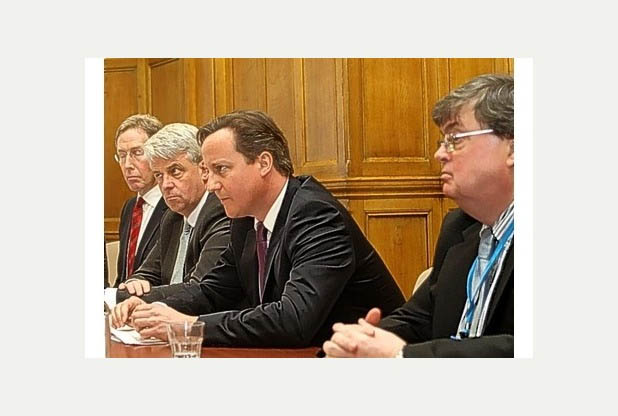 Norman had said he wanted the resort to back the campaign and eventually advertise it to potential holidaymakers.

Torbay District Council said it supported the idea and could see both the resort and visitors benefiting.

The question here is: what is a relevant standard of a ‘dementia friendly community’?

In the missive cited above, further details are provided:

“Development of a code of practice on dementia friendly communities

Building on the foundation stage of the recognition process, the Alzheimer’s Society has commissioned British Standards Institution (BSI) to develop a code of practice for dementia friendly communities. The ambition is to have 15 communities signed up to the BSI code of practice by March 2015.”

But here having a standard ‘code of practice’ means that commissioners can readily say that their community is ‘dementia friendly’, irrespective of what is actually happening on the ground.

It serves as a lazy tick box mechanism for local commissioners. And people become ‘locked into’ getting tenders from the Alzheimer’s Society. This is clearly unacceptable when there are many serious good innovative social enterprises, and other dementia charities, who are at a big risk of being disenfranchised.

It suits the signatories of that missive to tell Government they are doing a good job on dementia friendly communities.

It allows the current Secretary of State  to report to the public (via compliant newspapers), that they are doing a great job on dementia friendly communities, despite any range of fiascos of poor dementia care on the ground such as Winterbourne.

The pockets of real power in the company. This may involve one or two key senior executives, a whole group of executives, or even a department. The key is that these people have the greatest amount of influence on decisions, operations, and strategic direction.

A range of techniques from the standard corporate marketing literature has been loyally harnessed to promote a corporate ‘cultural web’ around ‘dementia friendly communities’ from the Alzheimer’s Society. The Alzheimer’s Society, together with the current Government, have been able to secure competitive advantage, even harnessing appropriate use of legal monopolistic intellectual property rights. However, the drawbacks of such a well orchestrated approach is that it has not been able to mute genuine ‘word of mouth’ criticism which is mounting everyday over this policy on the social media. In light of the recent targets culture in the NHS, some experienced people have been publicly opining whether “Dementia Friends” is in fact hitting the target but in fact missing a point in genuine organic development of dementia friendly communities. It has become a vehicle being used primarily to promote this Government (Department of Health and Secretary of State), the Alzheimer’s Society, marketing companies, sponsoring corporates, and some celebrities, in as much as, or even much more, than persons with dementia or even the million-or-so army of unpaid caregivers.