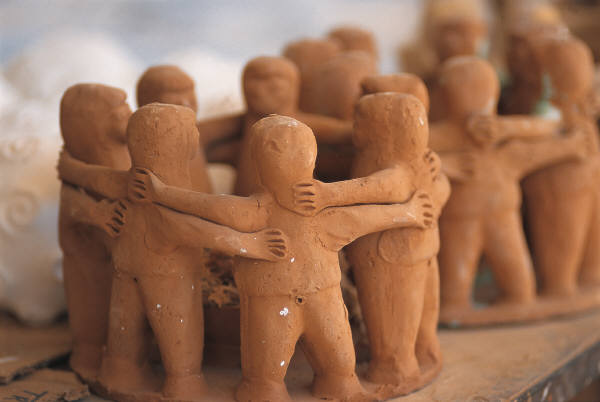 There is of course an element of both. “Dementia friendly communities” could be an example of corporates not behaving badly, to create a competitive advantage for themselves; or it could be quite nifty marketing.

Corporates not behaving badly, officially known as “corporate social responsibility” is a form of corporate self-regulation integrated into a business model. CSR policy functions as a built-in, self-regulating mechanism whereby a business monitors and ensures its active compliance with the spirit of the law, ethical standards, and international norms.  It’s in keeping with the idea of corporates like citizens just like the rest of us, like trade unions, for example, all co-existing “in the public good“.  CSR is a process with the aim to embrace responsibility for the company’s actions and encourage a positive impact through its activities on the environment, consumers, employees, communities, stakeholders and all other members of the public sphere who may also be considered as stakeholders. Given the talk of “pandemic” and “time bomb”, it’s not a huge surprise corporates will wish to be in on the action. Some were out in force last week at the #G8summit. So that’s the answer to the question posed by Vivienne Parry in the session with NIKE and BT: “What are they doing here”?

Companies the world over, whether they are involved in consumer sales, B2B, intermediaries, charities or NGOs, all recognise the importance of marketing. Marketing tends to be something which many people feel they can have a dabble at, but of course charities have highly skilled people doing it just like any other corporate. ‘Strategic marketing‘ has been defined by David Aaker as a process that can allow an organisation to concentrate its resources on the optimal opportunities with the goals of increasing sales and achieving a sustainable competitive advantage. Or surplus, if you’re in the third sector. Talk to any smaller charity going out of action, like Dementia Advocacy Network, and you’ll see cut-throat it can be.

The highly visible “dementia friendly communities” programme of the Alzheimer’s Society focuses on improving the inclusion and quality of life of people with dementia, as described here.  The Alzheimer’s Society’s five year strategy includes a key ambition to work with people affected by dementia and key partners to define and develop dementia friendly communities.  In these communities: people will be aware of and understand more about dementia; people with dementia and their carers will be encouraged to seek help and support; and people with dementia will feel included in their community, be more independent and have more choice and control over their lives. And it’s also great publicity for corporates which sign up. The Prime Minister’s challenge on dementia also includes an ambition to create communities that are working to help people live well with dementia, and which politician doesn’t seek to be re-elected?

However, the concept is actually not at all new.

The “York Dementia Without Walls project” from the Joseph  Rowntree Foundation looked into what’s needed to make York a good place to live for people with dementia and their carers. It’s argued fundamentally that dementia-friendly communities can better support people in the early stages of their illness, maintaining confidence and boosting their ability to manage everyday life. Working with people with dementia, the research team investigated how local resources can be harnessed to this end, provided there is enough awareness. It was great work.

They were not alone. The RSA also developed their “connected communities” project. Connected Communities is a research programme that explores ‘social network’ approaches to social and economic challenges and opportunities. They concentrated on understanding, mapping and mobilising ‘real world’ face to face networks of support and exchange between citizens, small informal groups, public sector and third sector agencies, and private sector businesses.

This RSA group perceived the answer was to be found in “networks” because networks have dynamic qualities through which behaviour, emotional states, conditions, and influence spread and cluster, often in quite specific ways.

The UK indeed is not alone.  There’s been a growing number of cities and communities worldwide are striving to better meet the needs of their older residents.

The WHO Global Network of Age-friendly Cities and Communities was established to foster the exchange of experience and mutual learning between cities and communities worldwide. Any city or community that is committed to creating inclusive and accessible urban environments to benefit their ageing populations is welcome to join.

And these initiatives have had great success, which is to be applauded. In October 2013, it was announced that a landmark guide for banks and insurers to help improve the everyday lives of people affected by dementia was being launched by Lloyds Banking Group and Alzheimer’s Society. The ‘Dementia-friendly financial services charter‘ was designed to help financial services organisations recognise, understand and respond to the needs of customers living with dementia and their carers. Financial abuse can be a massive source of worry for carers of people living with dementia, so it was wonderful Lloyds Bank participated in this innovation.

So why should corporates prefer to go with the Alzheimer’s Society? It is quite possible that this is due to the strength of the brand of that society.

A parallel can be seen in property law.

A landlord would obviously prefer to know that his tenant is solvent and reputable and consequently more likely to perform all leasehold covenants.

The parallel is the power of the brand of a charity – its “pulling power”.

Businesses and charities put a lot of time into their outward reputation, in the hope of attracting more inward business. Whilst Google hits are not per se a sign of popularity and goodwill, because for example a Google ranking might depend on the number and quality of pages which link to that webpage, the ranking of a phrase can be a good indication of the power of a brand.

Here it is quite interesting that the Alzheimer’s Society puts up a good showing for a search of ‘dementia friendly communities’. A possible reason for the society’s success here is to find in the last entry of this extract: the powerful strategic alliance it has with the Department of Health, who will clearly want this project to succeed. 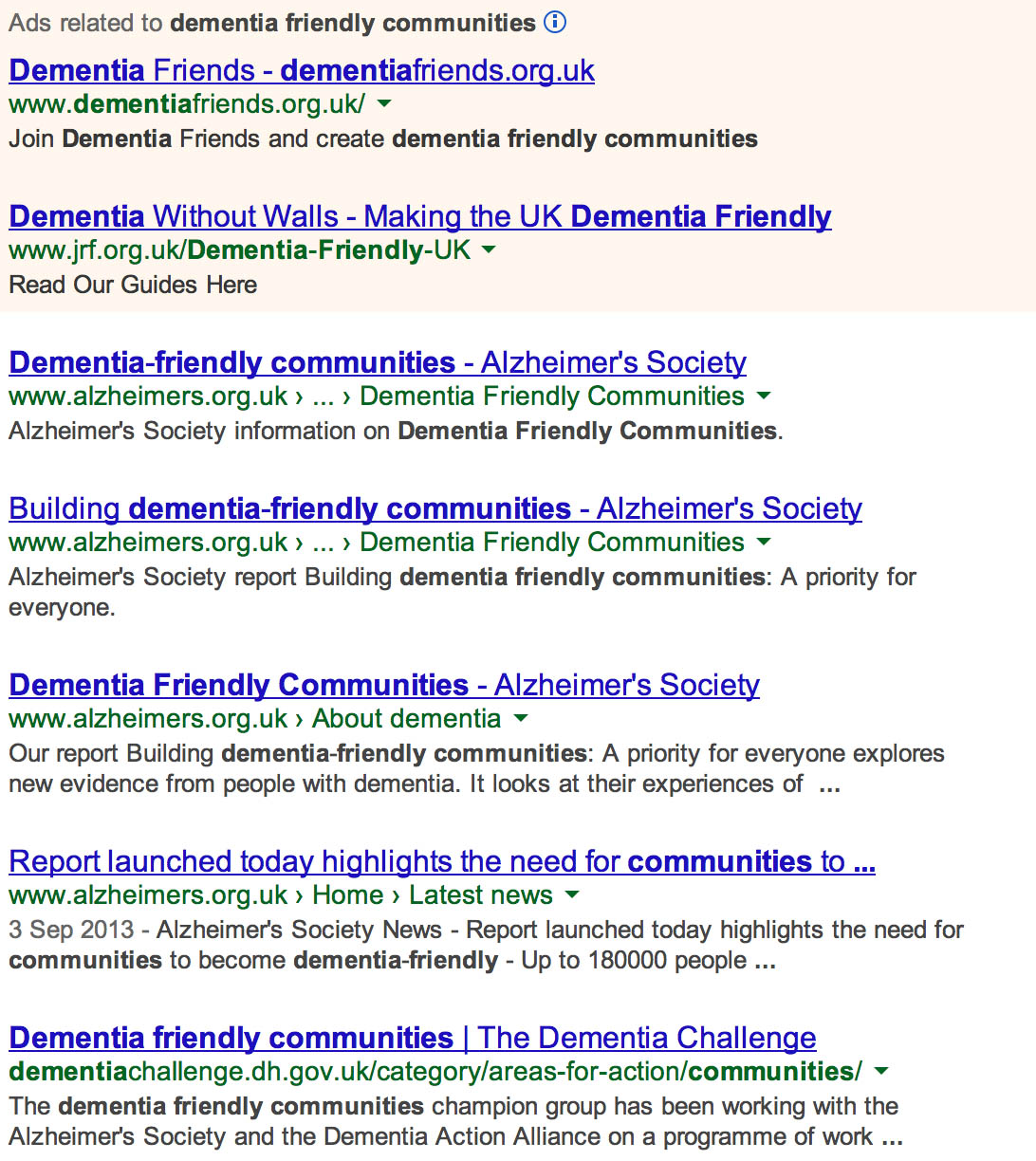 Despite various third sector and corporate entities competing with each other, there has been remarkably little scientific peer-reviewed published evidence on “dementia friendly communities”. Here for example is the output from the ‘Medline’ database encompassing a huge collection of medical journals. This search only returned two pieces, where the abstract was not even available. Many, therefore, will have agreed with Sir Mark Walport, the Chief Scientific Officer, to query publicly at #G8dementia what the precise evidence base for the “dementia friendly community” is currently.

““Dementia-friendly” has become part of the language of strategic planning in the public and third sectors, since the launch of the Prime Minister’s Challenge on Dementia in England in 2012 included the creation of dementia-friendly communities as one of its three main objectives. However, its exact meaning is inconsistent.

Being “dementia-friendly” has also become an aspiration for specific organisations, for facilities and buildings and for services – sometimes as part of a wider commitment, sometimes stand-alone.

DSDC does not believe there is a single model of “dementia-friendly”, or any need for one.  But it does advocate for objective measures of what is being promoted as “dementia-friendly” to ensure it is not just a popular phrase used to cover shallow or cosmetic change. In terms of what we do ourselves, DSDC aims to help any group or community work out what can be achieved on a sustainable basis given available local resources.”

“Commentators on branding suggest that ethical consumption is one of the most significant issues in modern markets. The conclusion is that ethical and environmental questions are being posed by growing numbers of consumers, but they are not always overly impressed by companies’ responses. It is also unclear how robust ethical consumerism will be in the face of other pressures – sales of organic foods fell nearly 20% in the UK in 2008, as consumers reverted to cheaper alternatives when economic conditions worsened. Nonetheless, the impact of “ethical consumerism” is large and of escalating significance.”

A particular banks, despite being in a relatively crowded market (and hence oligopolistic), particularly need to demonstrate why it’s better than the rest, and ethical consumerism has been particularly important for this in recent times, possibly in a way accelerated by the global financial crashes.

Also such initiatives are particularly attractive to investors, viz:

“There are growing signs that many corporate boards of directors are under shareholder pressure to adopt more acceptable environmental policies and keep a closer watch on environmental issues, reflecting investor concerns about global warming and shortages of natural resources. The attitude of investors toward CSR initiatives may be positive or negative. For example, it may be from an investor perspective the case for sustainability is essentially a business case – initiatives are not about “saving the planet”, but about cutting waste, reducing costs and becoming more efficient. In 2006, Google launched a strategy to switch to renewable energy – while this reflects the personal beliefs of the founders of the business, it is also true that Google is a massive user of electricity and renewable energy provides a way to cut costs. Nonetheless, when Google announced its renewable energy strategy, one leading New York stock analyst downgraded the company, despite clear indications that the initiative would cut costs – his view was that the company was no longer focusing on its real priorities.”

This criticism clearly would not apply to dementia charities, where inclusion of disabled members of society would be invariably an aim of any reasonable dementia charity. But the point holds: that the ‘market’ is sensitive to a company’s ethical credentials these days. For example, a dementia charity which solely concentrated on genomic ‘big data’ might not have as much competitive advantage with the general public. And the ‘dementia friendly community’ is an effective way of returning value to members of the general public, in the absence currently of disease-modifying drugs or cures for Alzheimer’s disease and the other two hundred causes (at least) of a dementia.

It is not of course accidental that Andrea Ponti from JP Morgan was there at #G8dementia. Corporates behaving well is big business. It would be easy to dismiss what they can bring to the table, that is somehow raise the profile of dementia. The tragedy of course would be if diversion of resources acted to the detriment of actual patient-centred care so desperately needed at the moment.