This was the famous selfie from the Oscars which went viral all over the internet, partly thanks to social networking sites such as Twitter. 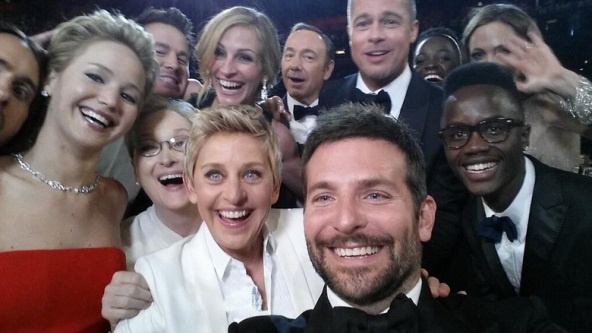 But this snap photo explains why Liza Minelli was unable to make it. 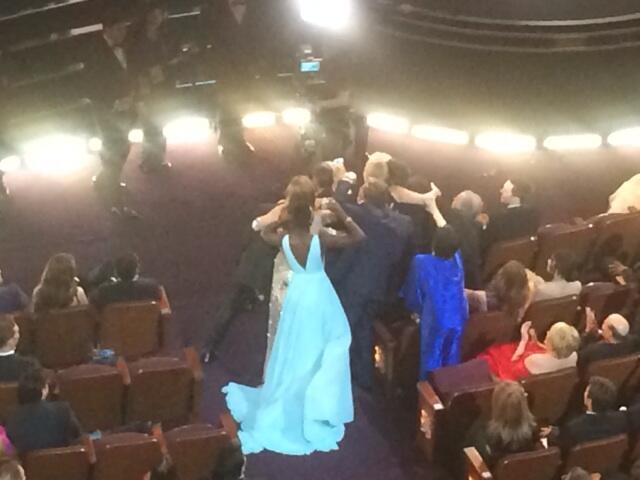 That things might not be quite as they first appear is nothing new.

Kate Swaffer (@KateSwaffer), living with dementia in Adelaide, has remarked in the past how she feels like a duck all serene on the surface, but paddling really hard underneath.

The co-production of public services has been defined in a variety of ways – e.g. “Co-production means delivering public services in an equal and reciprocal relationship between professionals, people using services, their families and their neighbours” (New Economics Foundation).

Or in the alternative, “the public sector and citizens making better use of each other’s assets and resources to achieve better outcomes and improved efficiency” (Governance International).

Research into dementia, more so following the G8 Dementia Summit, has been dominated by analysis of Big Data genetics with a view to ascertaining risk pools and personalised medicine, possibly means for asymptomatic screening or early detection, and new pharmacological interventions.

The amount of resource allocation put into this some might say has not been matched by the successful outcomes from this research, though the corporate capture in the large charity, politics and media are well known.

But I believe strongly research into quality of care, or indeed living well with dementia in support settings, should not be regarded as ‘inferior’.

Careful research attention should be put into assistive technologies, assistive living, the innovation culture, design of wards and homes, and, of course, how you measure living well in the first place.

Co-production, however, offers a chance for people with early dementia to be able to shape the services for care, as well as to shape research.

I have latterly become involved in a crowdfunding campaign where I explain the critical importance of decisions for a person with dementia in the science of dementia as well as the implications for our law on mental capacity.

But I also want this to initiate a dialogue between people with early dementia and other interested parties with the law and neuroscience, and other possible stakeholders such as the NHS.

I’m mindful that my book ‘Living well with dementia’ does look through the “personhood lens” – a lens which has done much to challenge the stigma and discrimination associated with dementia – and some people don’t like that.

Darren Gormley (@mrdarrengormley) immediately pointed me to an area of work, in particular a paper called “From personhood to citizenship: Broadening the lens for dementia practice and research” by Ruth Bartlett and Deborah O’Connor in Journal of Aging Studies 21 (2007) 107–118.

“One of the main boundaries of personhood is its lack of political dimension. In cognate literatures, including social gerontology, critical psychiatry and disability studies, a citizenship lens is used to promote the status of discriminated groups of people to that of an equal citizen, with the same entitlements as everyone else.”

“These disciplines use citizenship to understand and expose discrimination against marginalized groups such as people with physical disabilities and to reframe and politicize understanding of the experiences of people with mental health conditions; the scope of this work is wide ranging and goes beyond care issues to include discrimination in the workplace and communities generally.”

The need to promote citizenship, as well as personhood, is beginning to be recognised within the dementia care literature, and I am hoping that this with an emphasis on living well with dementia will percolate into the research arena too.

A result of this shift is that, gradually, research has begun to emerge aimed at capturing the perspectives of persons with dementia. This body of research now clearly documents that persons with dementia are often quite aware of their situation, and can contribute important and unique insights about their experiences and needs.

I have often whinged about the word ‘sufferer’ so I was particularly interested to see the authors make the following remark.

However, my own particular interest is research for dementia, so this intrigued me massively since, if you pardon my phraseology, some of my best friends live successfully with dementia.

“The importance of making the shift to citizenship is further evidenced when one considers the potential direction of dementia care research. Currently, Alzheimer’s Society, UK has people with dementia on its research review panel, and there is a small (growing) body of literature to help academic researchers involve people with dementia more creatively in the research process.”

“People with dementia are clearly seen and treated as important players in the research process. However, little of the research looking at user perspective has gone to the next step of either pulling together or examining what happens in research projects in a way that is political.”

“For example, in most user perspective studies, individual needs are spoken of and contextualised using themes or general categories related to care provision; data are not generally seen in the wider political context of the need for social change.”

And that for me is the issue of a two tier nature of who decides research agendas in practice.

Kate Swaffer and I often discuss behind the scenes our concerns about ‘tokenism’, both from quite different personal viewpoints but with similar themes.

How things appear might not actually how they are in reality.

Ruth Bartlett, to her credit, has also developed a ‘toolkit’ draws on my experiences of using diaries for research into the lives of people with dementia who campaign for “social change”.

I really had not intended to start a ‘social movement’, but this is in fact exactly what I wish to do now.

And I’m clearly bound to be very happy that currently there’s a massive ESRC grant looking into this.

“Finding that people with dementia are willing and able to campaign, and presenting this at national and international conferences, has captivated academics and improved their understanding of people with this condition.”

This also has profound implications for service development for dementia consistent with the current trajectory.

A rhetoric of ‘user involvement’ became a central part of NHS policy during the establishment of the Community Health Councils in 1973. This had continued through the proliferation of “New Public Management” principles and the growing importance of measures of satisfaction in the 1980s. The NHS and Community Care Act [1990] established a formal requirement for service user involvement in service planning.

From 1997, patient and public involvement were a central tenet of New Labour’s NHS modernisation agenda, and the NHS Plan was committed to creating a patient-centred NHS with user needs at the centre of service design and delivery.

I dare say all of this will be known to Simon Stevens, incoming head of NHS England and one of the key-architects of the NHS Plan.

Arguably, the roots of the phenomenon of ‘experts by experience’, potentially an abreaction to the medicalisation of mental illness, can be found in a history of mental health activism as far back as 1620, when inmates at “The Bedlam Asylum” petitioned for their rights.

After some initial disgruntlement, I’ve now decided I would never dream myself of being an ‘expert’ in anything to do with dementia, but rather a well-informed enthusiast.

People living with dementia and all carers including unpaid caregivers are the real experts.

The somewhat political term “survivors” refers to those who have survived not only their mental health difficulties, but also experiences of psychiatric services, and/or the accompanying general social exclusion.

Or you can the viewpoint, particularly if you’ve been influenced by some, that ‘users’ of mental health services are ‘consumers’ and help to design them.

This is of course all very timely. The Kings Fund have recently published its interim report from the “Independent Commission on the Future of Health and Social Care in England” by Kate Barker and colleagues.

A lack of co-production possibly caused the problems in entitlement and funding which meant Sally (@nursemaiden) was at the receiving end of a bad experience of services looking after her father who was living with dementia.

@RichardatKF @legalaware Thank you Richard I still feel at times I let him down that I should have fought harder against the system.

In fact Sally has written about this in the Foreword to my book.

I’m one such survivor, as I’m in recovery from alcoholism for seven continuous years now. I also live with physical disability.

It’s not enough merely to ‘involve’ carers though; carers patently need to be involved in research as without them the entire service would collapse. And carers themselves often need support, over all sorts of health issues, legal or financial matters.

It’s also essential to ‘involve’ people actually living with dementia who may or may not have some similar concerns, and some different.

But ‘involving’ is not enough.

I feel passionately that people with early dementia should be given the power and control to shape the research agenda in their interests, such as the brilliant work by Ruth Bartlett. This may or may not include living well with dementia: that’s not my choice, but I’m pretty sure I  know what the answer might be. Otherwise, ‘co-production’ is merely an illusion of involvement, and as regards living well with dementia is not at all what it seems. Suffice to say, I am not afraid about shouting loud about this on behalf of people living well with dementia.