First thing’s first, I loved the company up there. I met people properly up there, including Prof Dawn Brooker, Prof Murna Downs, Sally Knocker, Damian Murphy and Philly Hare, whom I hadn’t really met bet before. I ‘get’ Dawn’s work, Murna has a terrific sense of humour, Sally’s completely lovely, Damian’s on the ball with his work and Philly I think has a heart of gold. I can see now why Philly and Wendy (Mitchell) get on so well. I was thrilled to see the leaders of the Lewy Body Society confidently presenting their society – lovely ambassador and work I’m very interested in (having received so many complimentary reports on Prof Ian McKeith’s clinical approach.)

I suppose I did have different expectations of the event. I expected it to be ‘hard sell’ which it wasn’t. I expected the material to be light academically (I don’t mean this in an academic snobby way) – but it wasn’t. There was a real family atmosphere. Some members of the family perhaps were not that thrilled to see me (but didn’t say so), but on the whole I had a very happy time. Some of the family I’ve been around half way round the world with – like Chris Roberts and Jayne Goodrick to Australia.

It gave me great pleasure, from a completely egotistical perspective, to direct people to my book ‘Living better with dementia: good practice and innovation for the future’ to the JKP Press stand.  It happened also to be convenient shorthand whenever somebody asked for my thoughts on an issue.

I had become fed up with the question of ‘what do you do?’ I am bound to feel fed up with this in the sense that I genuinely feel I am not ‘doing’ very much; but what I ‘do’ I enjoy so much, it doesn’t feel as if I’m ‘doing it’.  But this time I was helped along by my name badge saying I worked for ‘Ground Floor Flat’. I said jokingly on Twitter I was hosting at Congress my launch party for  a brand new innovative, person-centred care for people living alone with dementia in relation to ‘Ground Floor Flat’. 11 people retweeted it. I withdrew the tweet. [Note to editors: both my regulators despite offences of dishonesty.]

Suzy Webster and Sarah Reed laughed so much about this. I wish Suzy had been there longer, and I wished I’d been there for Sarah’s session but I think it clashed with Andrea Sutcliffe’s session. I had a coughing fit during my session, which was probably divine retribution for me asking whether dementia policy should be governed by the free market.

I was a bit disappointed with the Ministerial video. It didn’t say much I didn’t already know. I perfectly understand her not being there because of a three-line whip, but wish I had come out of that video of hers knowing something a bit more about this current government’s commitment to dementia policy. I think Jeremy Hughes answered questions very skilfully – including my one asked of a panel on personal budgets.

I have very few criticisms of this event. One session overran, was appallingly timed, not much focus on actual empirical work (very anecdotal), and then did not allow time for questions. But on the whole the sessions were academically rigorous, thought provoking and presented to a very high standard. As I tweeted at the time, the session chaired by Zoe Harris on coordination of care and personalised approaches, featuring the titans Ian McCreath and Helen Sanderson, was the best conference session I’ve ever been to (and I’ve been to very many).

The need for clinical specialist nurses was very very loud in this conference, and so it should be given the overwhelming thumping clinical evidence for their importance in outcomes especially in coordination of NHS and social care. It was totally lovely to chat with Karen Dening, Rachel Thompson, Amy Pepper and Lucy Frost. 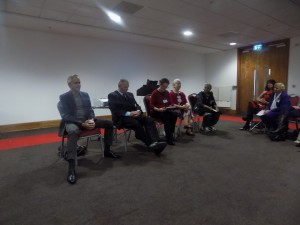 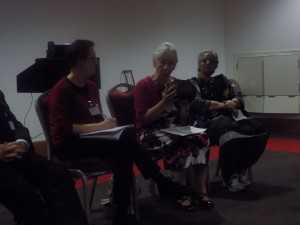 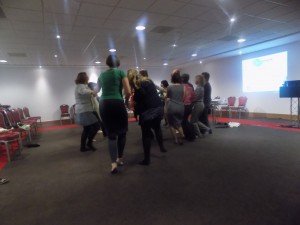 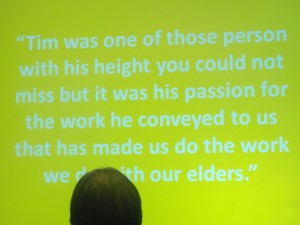 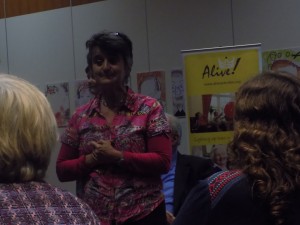 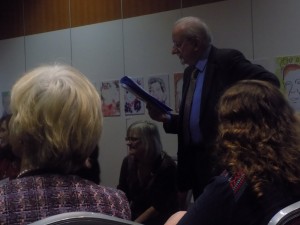 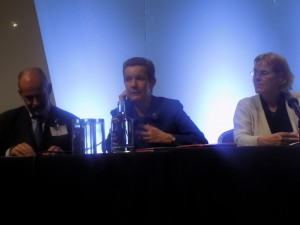 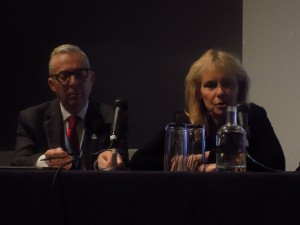 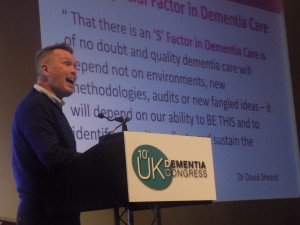 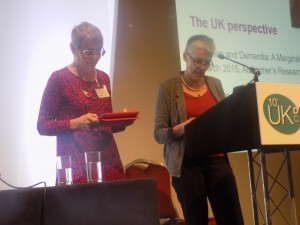 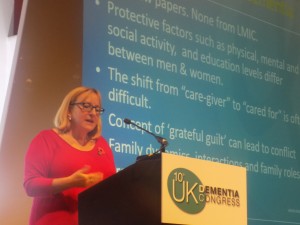 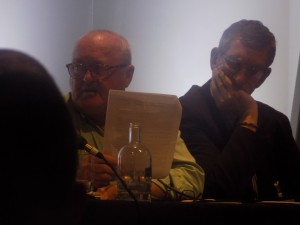 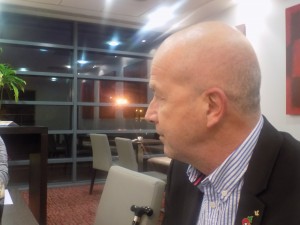 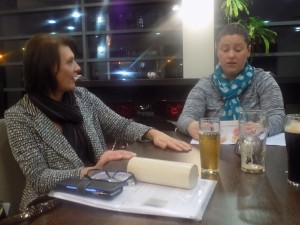 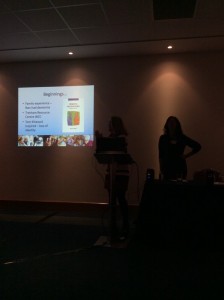 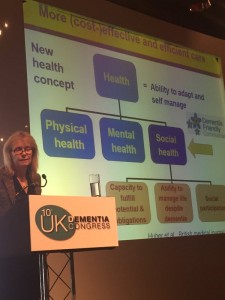 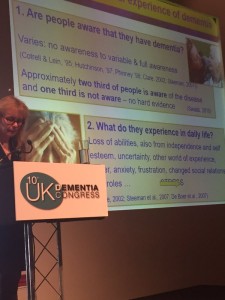 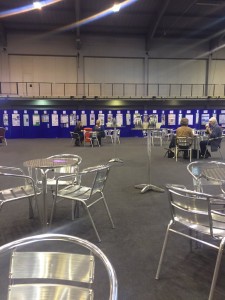 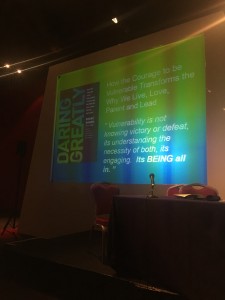 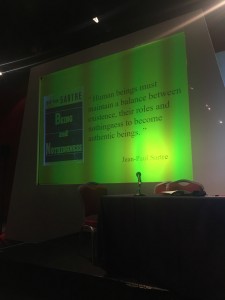 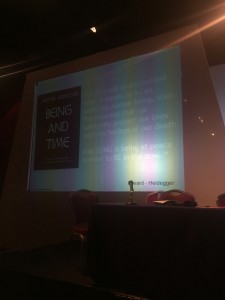 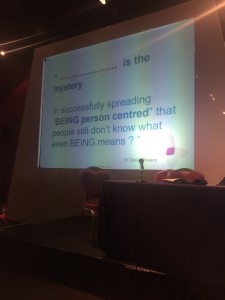 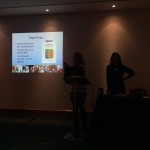 Steve Milton inspired me massively, in doing huge amount of work and refusing to take credit for any of it. Toby Williamson continues to inspire me as being very understated but massively over delivering. I chatted with Toby personally about a common interest in rights and disability (the brilliant Mental Health Foundation report on this under Toby was published earlier this year.) I wish I had spent more time with Peter Mittler at this conference.  But I will catch up with Peter for definite. Peter’s put a huge amount into promoting rights-based advocacy approaches; he himself had a massive rôle in the development of this policy in the inclusion sphere and the UN Convention of Rights of People with Disabilities.

People living with dementia, like Peter, are the stars of the show. I loved seeing my old friends Ken Howard, Agnes Houston, Joy Watson, Tommy Dunne, and Keith Oliver. I see Keith as a very wise man, which he is. I have found Peter Ashley’s comments incredibly useful in the past – I share totally Prof Dawn Brooker’s regret at Peter not having been able to attend conference this year.

The plenary sessions by Prof R0se-Marie Drões and Prof Martin Prince on integrated person-centred care and global perspectives were superb.

My favourite session in the end was probably Lucy Whitman’s one based around her new book ‘People with dementia speak out’. I chatted with two friends of mine I adore, Larry Gardiner and Dr Jennifer Bute. Issues came up such as the impact of the diagnosis, and how it was more important to meet the needs of the person living rather than to get knotted into a diagnostic obsession. I loved speaking with Lucy privately – a terrific force for good.

David Sheard’s talk in the main hall of conference was awesome. It unfortunately produced an Amazon order of significant weight, but was entertaining, informative and educational in equal measure, in producing a thought provoking discussion of personhood in the light of recent trends in dementia care.

I am glad that this conference gave proper conference to the importance of carers in English dementia – TIDE carers were superbly represented by Louise Langham and Jean Tottie. The carers’ influence was also felt from a distance from Rachel Niblock, tweeting furiously, and in complete solidarity with Neil Mapes’ superb presentation on a response for Age UK to provide inclusivity.

For next year, I’d really like a unifying theme for the conference, which this year’s suffered from not having one. I also felt that the conference fizzled out, albeit with outstanding parallel sessions, and maybe there should have been a common plenary for all of us (particularly to stop people getting early trains back home.)

I thought the Hawker bunch were lovely – I spoke with Mark, the editor of Journal of Dementia Care, and Richard, the Editor in Chief, who was all round brilliant. Much missed was Tim Lloyd-Yeates. I remember when Tim phoned me up to tell me of his medical diagnosis, and we chatted about how anything could happen to anyone at any time. Thanks to the organisers of this conference for a brilliant evening event, including a tribute to Tim, showcasing art. Massive thanks to Sue Benson who clearly was a glue for much of this conference of two days.

I did miss Kate Swaffer though. Kate won best leader award at a different conference. Rightly so, as my chapter on leadership in dementia in my book had her in mind.