In the penultimate chapter in my book, I provide a reasoned case why people living with dementia should be given a chance to articulate details of ‘policy’.

Virtually all of us who attended the event (“A conversation with Kate and Shibley” described in this previous blogpost of mine on this blog) found the afternoon ‘inspiring’ or the such like. Of course, this can be expected from fifty misguided hyperbolic attendees; but in fairness to us, we all had some sort of knowledge about dementia (in fact six of the delegates definitely could reasonably be called ‘experts’ living with dementia, so are experts in their dementia in their time.)

I brought up the idea that we appear to have a new national policy document every year almost. The wheel keeps on being reinvented. I cited the work of Wendy Hulko (@IncredibleHulko), that the views of people living with dementia had been systematically disenfranchised. I also cited the work of Ruth Bartlett (@RuthLBartlett) to do with reframing the narrative, e.g. away from a person being defined by his or her dementia.

The notion that “nothing can be done” is as untrue now, as it is untrue for the time in the future where we do happen to have stumbled across “cures” for the dementias in a piecemeal fashion in times to come. Here I’m arbitrarily defining a cure as a practical means of reliably stabilising a disease process of a dementia. For example, various psychological therapies have been demonstrated to improve cognitive functioning as well as other factors such as confidence and wellbeing. It’s likely that such psychological reablement and rehabilitation may provide some of resilience-boosting effect through the maintenance of appropriate activity-based neural connections.

The shift towards identifying the precise cognitive ‘make up’ of a person living with dementia allows identification of the precise abilities that a person with dementia at a given time has. This is a more productive use of the ‘follow up’. If in England services were commissioned fulfilling the s.1(1) Care Act (2014), to promote wellbeing, we could re-orient the Titanic that is the deficits-based medical model.

I gave a presentation on citizenship and living better with dementia as part of an event, co-hosted with Kate Swaffer, last Saturday. The slides for this presentation are here.

I am delighted that Chris Roberts accepted my invitation to give a brief speech in support of my book. Chris wrote one of the Forewords to the book (the other two are written by Kate Swaffer [@KateSwaffer] and Beth Britton [@BethyB1886]).

Both Kate and Beth need no introduction for their campaigning about dementia. I strongly commend to you blogs by Kate (here) and Beth (here) which will begin to introduce you to their substantial output.

Somebody in the audience, based on substantial experience of looking after her mum with dementia, warned against the volume of policies and strategies. This is not the first time I’ve heard this criticism, which invariably starts with, “I don’t know the details of these policies, but I do know what happened with mum”. Such feedback really is gold-dust.

That’s because in forming our views about how to progress with dementia care, there’s a feeling that “people don’t do ‘macro'”. In other words, people are more concerned about their living standards or zero hour contracts than they are about the national GDP. A person might be more interested in his or her personal wellbeing as a person living with dementia or carer, than the design of the post-diagnostic support systems (howeverso defined).

Through having completed two books on the subject of wellbeing in dementia, I’ve decided that there is a place for an overview of the general landscape. This is hugely fortified by personal experiences of people living with their dementias. Kate Swaffer is ‘unusual’ in that she can make sense of her living with dementia in the context of a huge and varied personal and professional background.

To work out what might be the lived experience of a Frenchman, you might ask a Parisian for an account (but even then this is a highly personal account for that particular Frenchman in his time and place). Or you can learn about the history, language, culture, infrastructure or geography of France as background, and still entirely miss what is important to that Frenchman. But that is not to say the cultural back story is entirely irrelevant.

But back to my primary point.

I think the way of turning around the iceberg is for people living with dementia leading on policy, not being ‘involved’ or ‘engaged’ with it at a superficial level. I’ve been struck by the remarkable success of Wendy Mitchell (@WendyPMitchell) in promoting research in dementia, amongst many other projects; or Ken Howard (@KenHowardUK) and Dr Jennifer Bute in a alerting people to what it’s like to live with dementia; or Hilary Doxford, as a member of the World Dementia Council, in alerting people to what matters to people living with dementia in global policy. I thank them all for their contributions on Saturday.

One of the many things which were discussed ultimately in how the media cannot be entirely to be blamed for negative perceptions of living with dementia. Part of a solution is for people living with dementia to present positive stories (as indeed Chris Roberts – @mason4233 – provided in a recent Alzheimer’s Society magazine, or Ken Clasper – @Ken_Kenc – did too.)

One mechanism for people living with dementia to participate in membership of national bodies. That’s why I am hoping that some individuals will put themselves forward (e.g. living with dementia or in a carers’ rôle) for the committee revising the NICE CG42 dementia guideline; applications close at 5 pm on 5 August 2015.

I hope, if you haven’t already done so, engage with these issues at a personal level in some way. I think it’s an enormous honour and privilege to be allowed a window into people’s lives. Dementia for me is not a medical ‘problem'; it is an opportunity for us to show, socially, solidarity and justice. 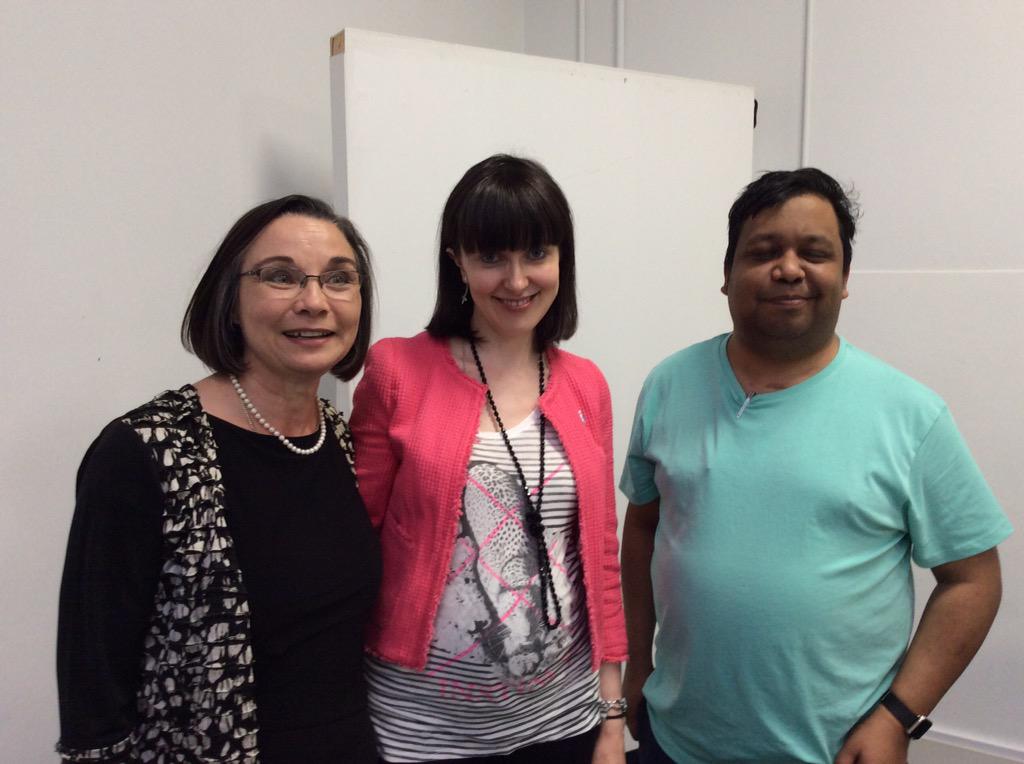 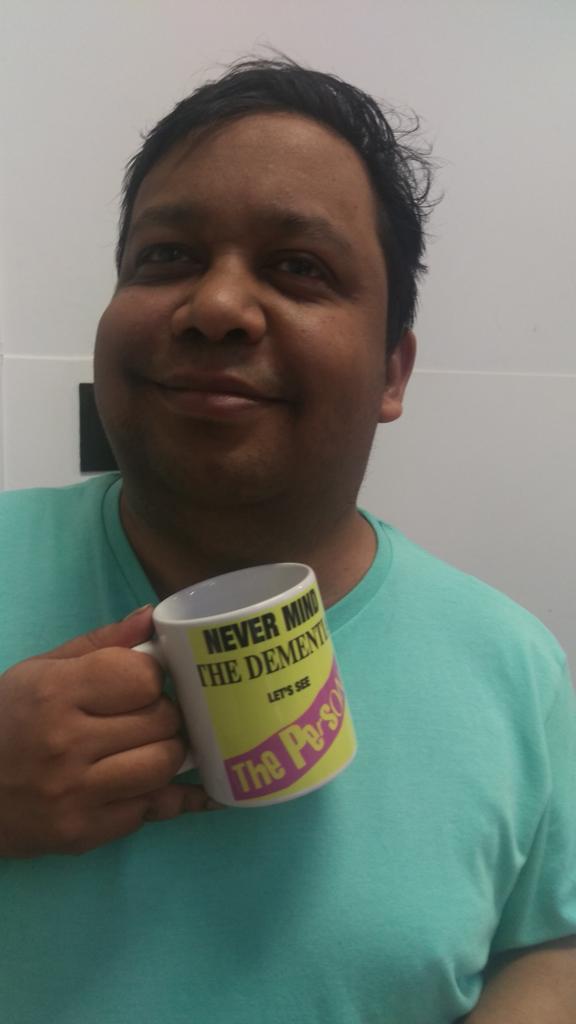 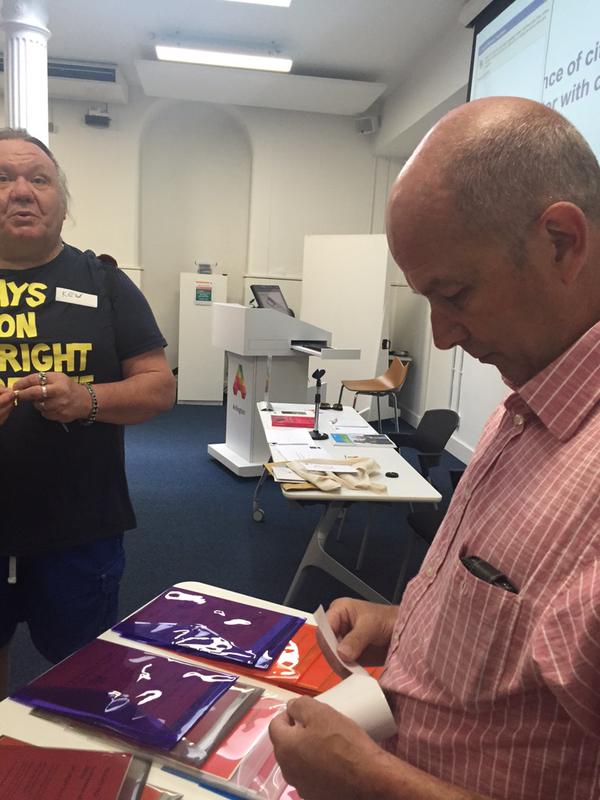 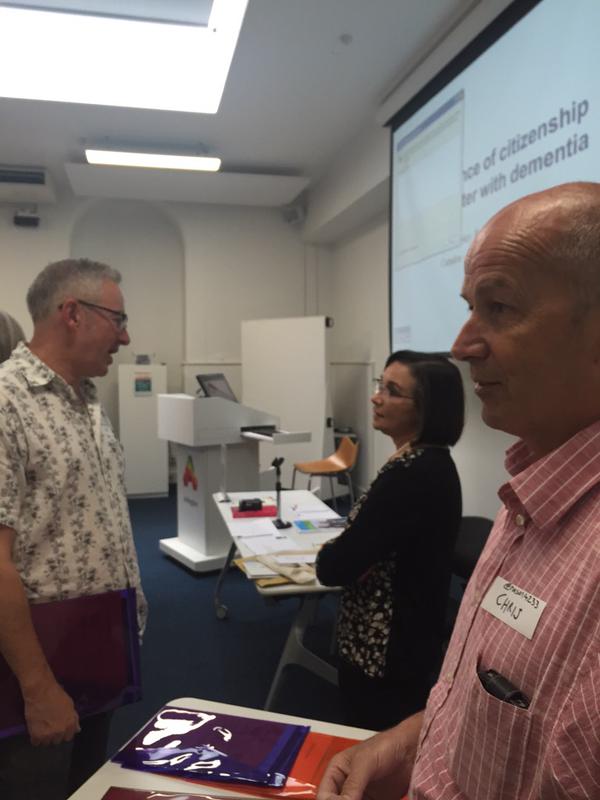 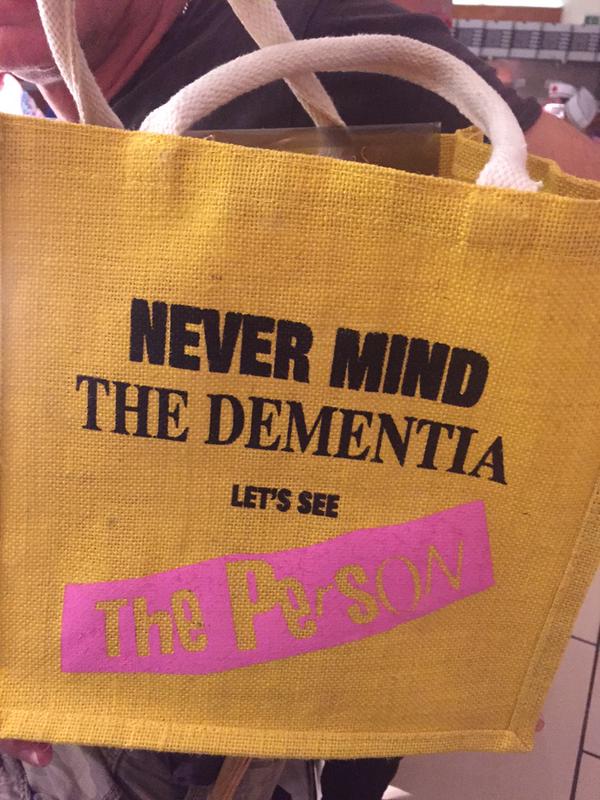 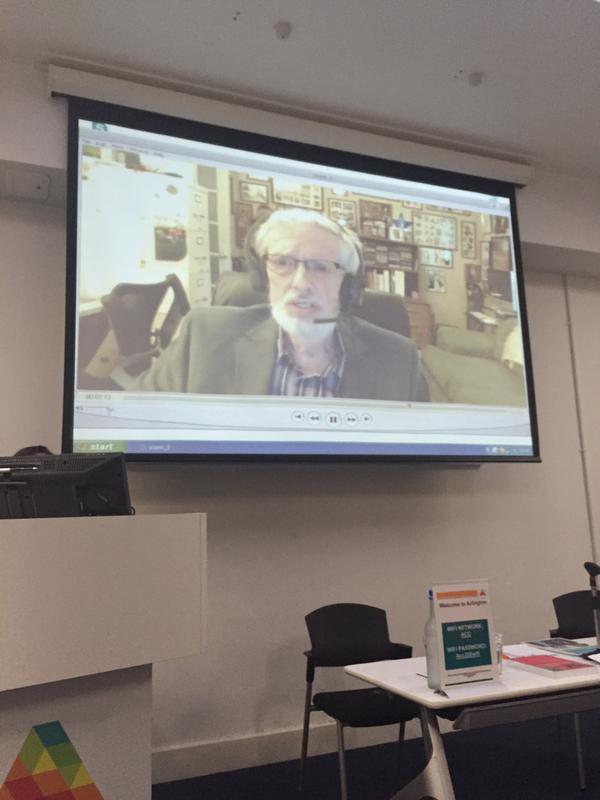 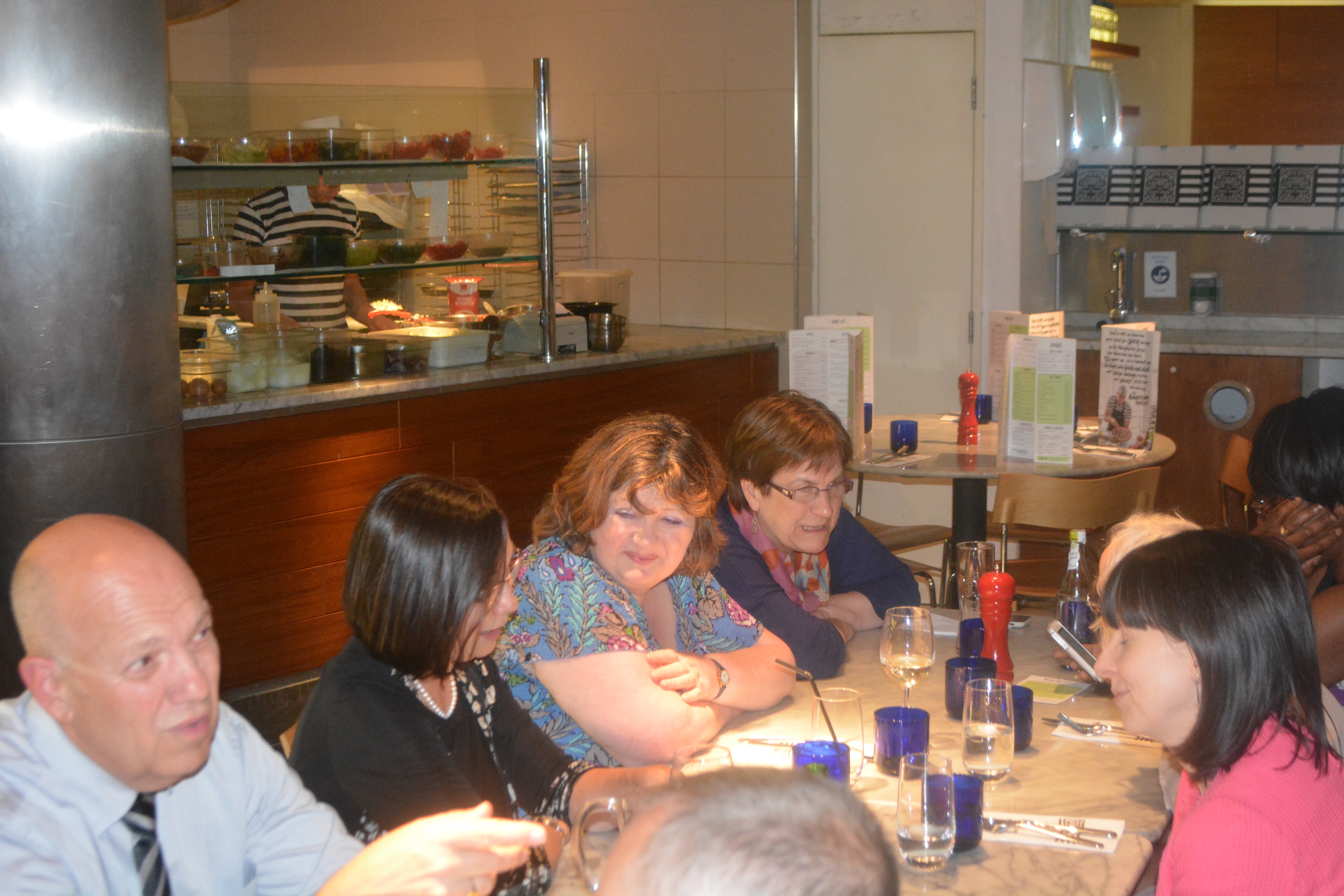 Kate did a separate – (much better in my personal view) – presentation. One slide from it says it all for me. 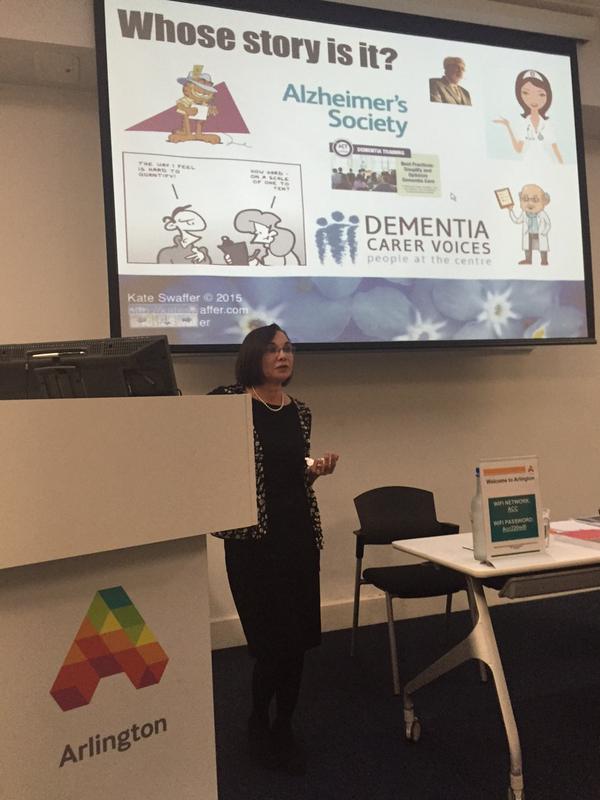 (“Living better with dementia” by me will be published in the UK on Jult 21st 2015, pre-order link here.)