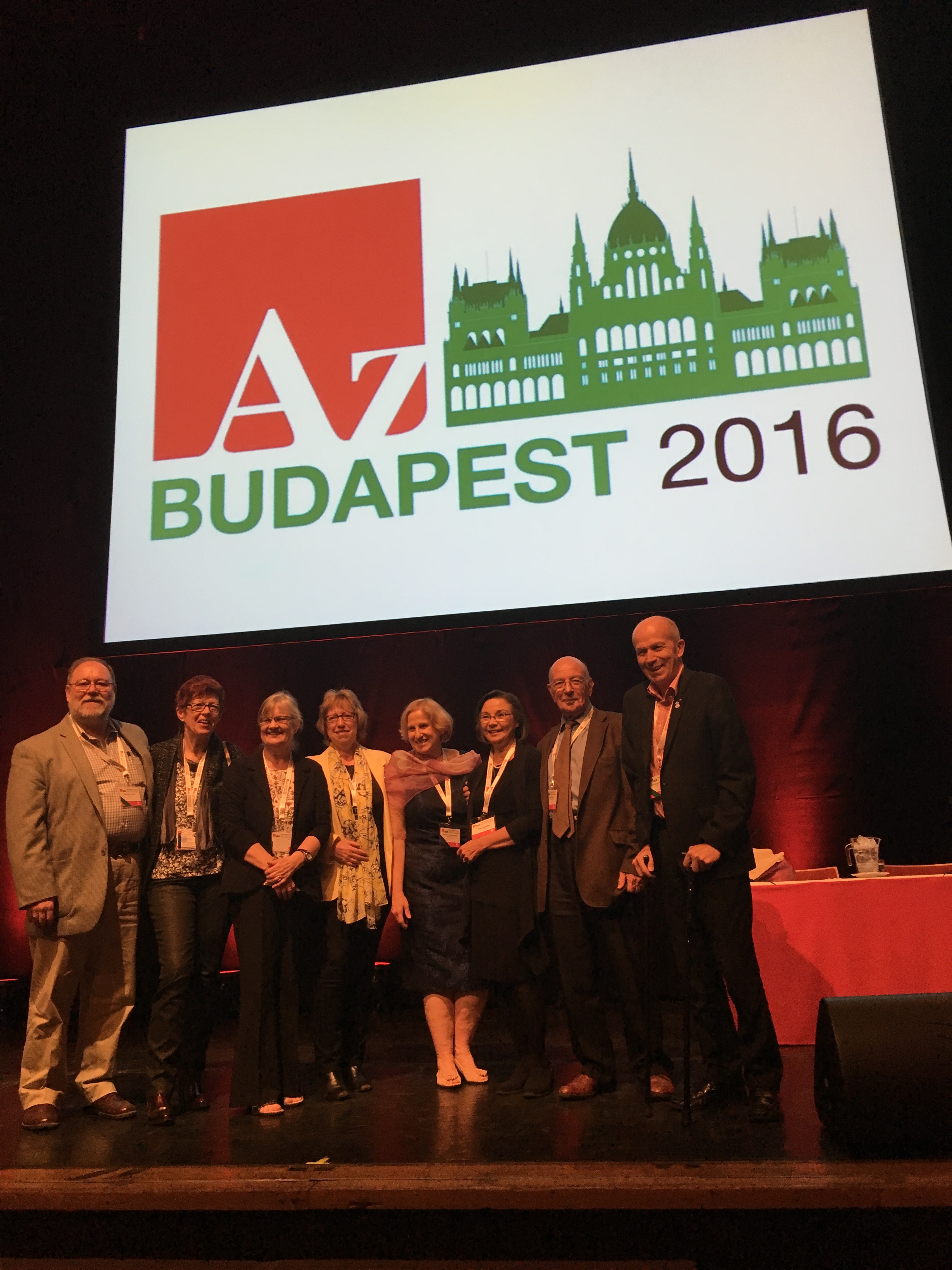 We have to talk about the Dementia Alliance International. This is a group entirely of people who are ‘living beyond dementia’, in the phraseology of their leader Kate Swaffer, campaigning for the needs of people living with dementia.

This can mean that they are often highly sought after for their independent, yet massively influential, views. Prof Mittler CBE has a long and distinguished career in the intellectual disabilities, and now currently lives with dementia. Mittler was indeed one of the leaders who helped to establish the UN Convention on Rights for People with Disabilities.

Mittler’s voice is therefore an authentic and learned one. He has much experience in navigating through the maze that is the policy territory of international NGOs. It was therefore pretty predictable therefore that the resolution he worked on for Dementia Alliance International, with Neil Crowther, would be unanimously assumed by the Alzheimer’s Disease International. This means that rights-based advocacy has now been delegated to all the national dementia societies to implement at a local level.

I believe the way forward in ‘activism’ for human rights needs above all to have authenticity. People with dementia need to be leading from the front, taking charge of the campaign. This is a cardinal example of authentic leadership from the front being much more convincing than ’empowerment or engagement’.

This means that an approach based on slick presentations and booklets with relevant case studies, for the benefit for commissioners, will not be effective in embedding a rights-based consciousness for rights, akin to the racial civil rights movement of Martin Luther King or the democratic movement of Mahatma Gandi.

This means that glossy pitches, grants and Powerpoints in town halls will not be the defining factor for embedding a rights-based culture.

Where I think the town halls will be useful will be in building up a ‘guiding coalition’ of people with similar values, such as other groups which are at the forefront of equality and campaigning against discrimination – e.g. groups campaigning for race-related rights, or rights of people with intellectual disabilities.

But again, such a manner of campaigning solely through this formulaic approach would be highly naïve, bordering on disingenuous, here. Human rights are universal and inalienable – this means they can’t be easily siloed off according to which ‘protected characteristic’, e.g. sexual orientation, age, has been breached on any one particular occasion.

We need to get away from the idea, running through English policy like letters in a stick of rock, that dementia is a condition to be gamed for the purposes of writing grants, for example in human rights.

Above all, people with dementia, not anyone else, must be leading the campaign on rights based advocacy.

A rights based advocacy approach for dementia in England can be achieved to a limited extent even if fronted by big charity and associated enterprises belatedly jumping on the bandwagon. But I don’t deny they also serve an important function in ‘playing the system’ – but this is not really what campaigning for rights is about. And they also have the big £££££.

The conundrum is quite literally this: Only people with dementia can do it, but they can’t do it alone?

This survey, which I am doing, is on rights and dementia.

This might mean rights you have a person living beyond a diagnosis of dementia (Kate Swaffer’s term) or as a carer.

This survey is not intended to make you feel bad in case you’ve never heard of these legal instruments or rights – simply answer ‘don’t know’. There’s no shame in that.

My view is that rights-based campaigning, which is adopted by the Scottish jurisdiction and increasingly by the English jurisdiction, is pretty rubbish unless people have heard of the rights which protect them.

The instruments referred to in this survey are rights includes ones which are automatically available to us, on the basis of being international instruments.

Thank you for your participation. It only takes a few minutes. 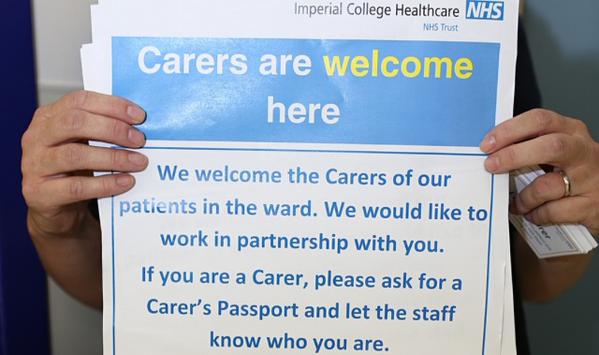 As explained in a very recent article in the Guardian, “John’s Campaign was launched in the Observer in November 2014 after the death of Dr John Gerrard. The aim of the campaign is to give the carers of those living with dementia the right to stay with them in hospital.”

Carers do not have constitutional rights in the current NHS Constitution, although there is a recent consultation exercise which has been completed this year.

According to the British Institute for Human Rights “A pocket guide for carers”, “In a survey of carers conducted by n-compass: 45% of respondents felt that human rights are very important or important to their caring role; less than 30% felt confident that they knew what their rights were; only 15% felt confident in advocating for the rights of those they care for. Source: Carers’ human rights consultation (September 2011)” (BIHR, 2012).

The current Government is in the process of repealing the Human Rights Act (1999) in accordance to their recent electoral mandate, but most academics in law feel that it would be very difficult for the UK to wish to escape the jurisdiction of the European Convention of Human Rights. This has not only been discussed at length in the academic journals, but also finally in the mainstream newspapers.

The BIHR document lists important human rights for carers, which indeed comprise the “essential toolbox” of a rights-based approach for carers: these are the right to respect for private and family life, home and correspondence (Article 8), freedom from inhuman and degrading treatment (Article 3), the right to be free from discrimination (this is protected by both the Human Rights Act (Article 14) and Equality Act 2010), and in extreme circumstances, your right to life (Article 2).

Looking at the issue of a right for carers of those living with dementia the right to stay with them in hospital, it is essential to note that people with dementia have human rights of their own. Lady Hale in her judgment in P (by his litigation friend the Official Solicitor) (Appellant) v Cheshire West and Chester Council and another (Respondents)  and P and Q (by their litigation friend, the Official Solicitor) (Appellants) v Surrey County Council (Respondent) at [2014] UKSC 19 made it perfectly clear that these rights are indeed universal and inalienable as you would expect them to be (they are also protected by the Universal Declaration of Human Rights).

But I feel it is essential to look at the Convention itself. 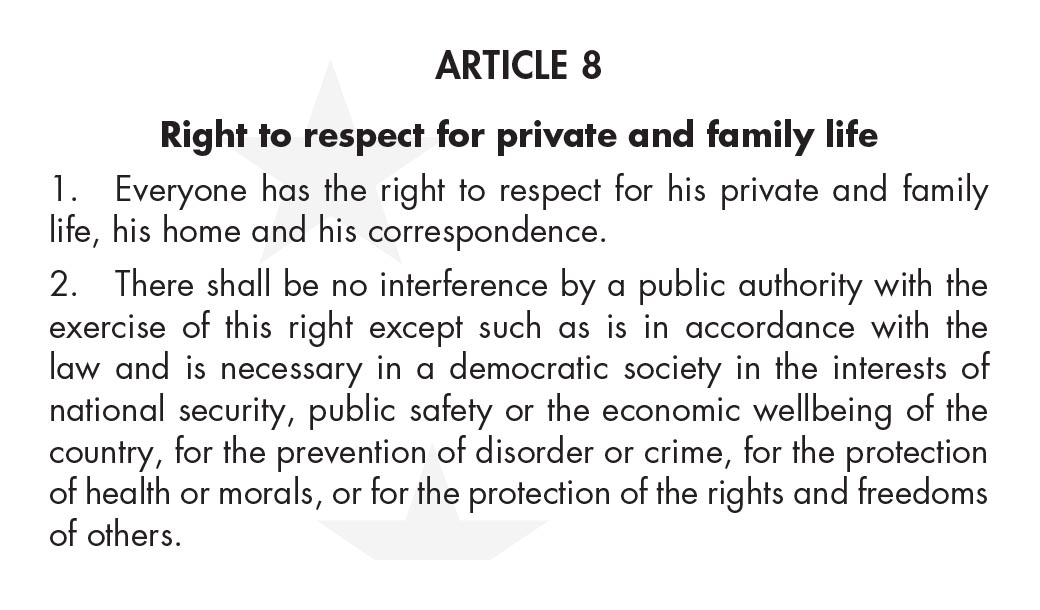 You could equally argue that the law should uphold respect for a person’s private life, home and correspondence. It has been, for example, estimated that there were about 670,000 unpaid primary family carers for people living with dementia in the UK. These carers will therefore have their own perspective of ‘private and family life’.

But there are pockets of law from the European Court of Human Rights which throw light on the direction of travel of interpretation of article 8.

Take for example application no. 14462/03 by Valentina Pentiacova and Others against Moldova in 2005. The case essentially concerned the availability of haemodialysis for chronic renal failure. Their case was allowed although there was an obligation to ‘exhaust domestic remedies’ as per article 35(1).

Domestic courts can interpret the European legislation within a margin of appreciation’. However, it is striking that the judgment makes reference to the wellbeing of people with disabilities. Dementia is a disability under the guidance to the Equality Act (2010), and it has been argued that dementia is a disability under the UN Convention of Rights for People with Disabilities.

This section of the judgment points to the Judges’ concern about the law, if not being upheld  acting to the detriment of people with disabilities. One suspects that lawyers defending John’s Campaign in the European Court of Human Rights might be sensibly be advised to advise the Court on whether carers not accompanying a person with dementia acts to the detriment of the wellbeing of that person with dementia.

The section runs as follows:

“The Court has previously held that private life includes a person’s physical and psychological integrity (Niemietz v. Germany, judgment of 16 December 1992, Series A no. 251-B, § 29). While the Convention does not guarantee as such a right to free medical care, in a number of cases the Court has held that Article 8 is relevant to complaints about public funding to facilitate the mobility and quality of life of disabled applicants (see, Zehnalová and Zehnal, cited above, and Sentges v. the Netherlands (dec.) no. 27677/02, 8 July 2003). The Court is therefore prepared to assume for the purposes of this application that Article 8 is applicable to the applicants’ complaints about insufficient funding of their treatment.”

Another interesting case judgment involves the second section decision on the admissibility of application no. 27677/02 by Nikky Sentges against the Netherlands. The applicant had been diagnosed with Duchenne Muscular Dystrophy (DMD), a disease characterised by progressive muscle degeneration, loss of the ability to walk and often the loss of lung or cardiac functions.

The applicant complained that his request to be provided with a robotic arm was denied. He submitted that the right to respect for his private life, as guaranteed by Article 8 of the Convention, entailed a positive obligation for the State to provide him with, or pay for, this medical device.

But here the discussion included what the ‘positive obligations’ of the State might be, and the exact scope of Article 8.

“However, Article 8 does not apply to situations concerning interpersonal relations of such broad and indeterminate scope that there can be no conceivable link between the measures the State is urged to take and an individual’s private life (see Botta, cited above, § 35). The Court has also held that Article 8 cannot be considered applicable each time an individual’s everyday life is disrupted, but only in the exceptional cases where the State’s failure to adopt measures interferes with that individual’s right to personal development and his or her right to establish and maintain relations with other human beings and the outside world. “

Here it might be that the European Court of Human Rights views that the admission of a person with dementia into care does not constitute an exceptional disruption of private and family life, and so would therefore not apply. However, against this, there is a huge literature in the medical press on how an acute admission of a person with dementia is incredibly disruptive to the ‘caring relationship’.

A third interesting judgment is a fourth section decision as to the admissibility of the application no. 56550/00 by Antoni Mólka against Poland.

The applicant was living with a ‘severe dysfunction of the limbs and is confined to a wheelchair’.

And here the judgment is very telling.

“The Court notes that in a number of cases it has held that Article 8 is relevant to complaints about public funding to facilitate the mobility and quality of life of disabled applicants (see Marzari v. Italy (dec.), no. 36448/9, 4 May 1999; Maggiolini v. Italy, (dec.), no. 35800/97, 13 January 2000; Sentges v. the Netherlands (dec.), no. 27677/02, 8 July 2003; and Pentiacova and Others v. Moldova (dec.), no. 14462/03, ECHR 2005-…). More generally, the Court observes that the effective enjoyment of many of the Convention rights by disabled persons may require the adoption of various positive measures by the competent State authorities. In this respect, the Court refers to various texts adopted by the Council of Europe which stress the importance of full participation of people with disabilities in society, in particular in political and public life (see “Relevant domestic and international law” above).”

All three judgments are not directly about the material facts in John’s Campaign. I am not in fact aware of the exact same case in any jurisdiction covered by the jurisdiction, which would lead me to think this would make an interesting ‘test case’ of public policy. Despite the fact domestic jurisdictions are free to operate a principle of subsidiarity in law, I think a legal case for the substantive issues in John’s Campaign can be made out, especially if such arguments emphasised the person wellbeing of the person with dementia and carer, and the economic wellbeing of the country.

This is definitely, as such, ‘unfinished business’.