By 2006, Bush had convinced himself that the invasion of Iraq was not a mistake.

“I’ve never been more convinced that the decisions I made are the right decisions,” he told a delegation of conservative columnists.

If you wish to believe that there is a war against dementia, you will go round seeking information to support that belief.

See for example the information extract below from an ‘infographic‘. 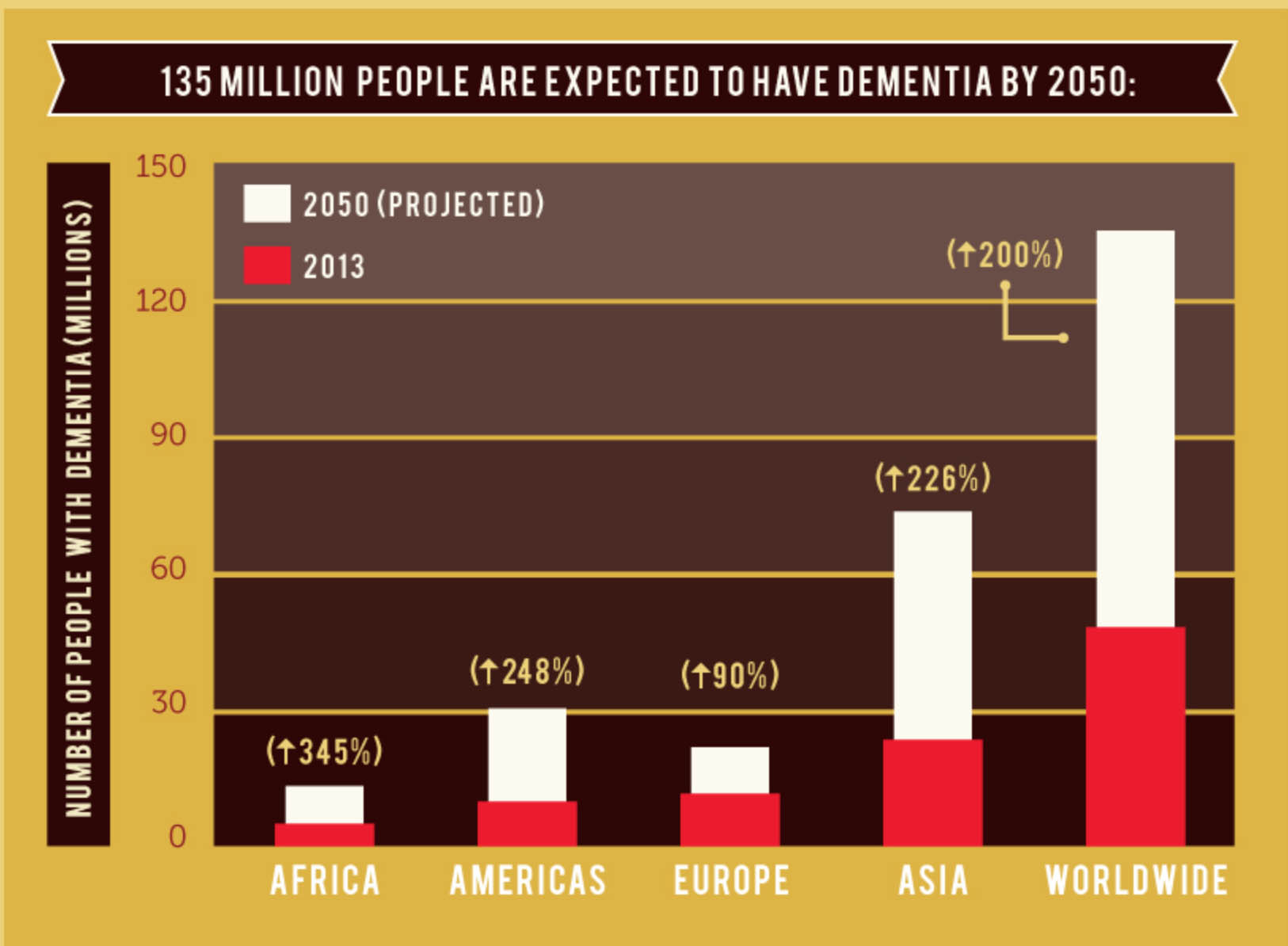 This is known as a ‘confirmation bias‘.

A related phenomenon ‘cognitive dissonance‘ is the excessive mental stress and discomfort experienced by an individual who holds two or more contradictory beliefs, ideas, and/or values at the same time. This stress and discomfort may also arise within an individual who holds a belief and performs a contradictory action or reaction.

The magnitude of dissonance produced by two conflicting cognitions or actions (as well as the subsequent psychological distress) is likely to depend on the importance of cognitions. The more elements that are personally valued, the greater the magnitude of the dissonant relationship will be.

Cognitive dissonance theory is founded on the assumption that individuals seek consistency between their expectations and their reality.

Because of this, people engage in a process called dissonance reduction to bring their cognitions and actions in line with one another. This creation of uniformity allows for a lessening of psychological tension and distress.

And it’s been a popular tool in political messaging. 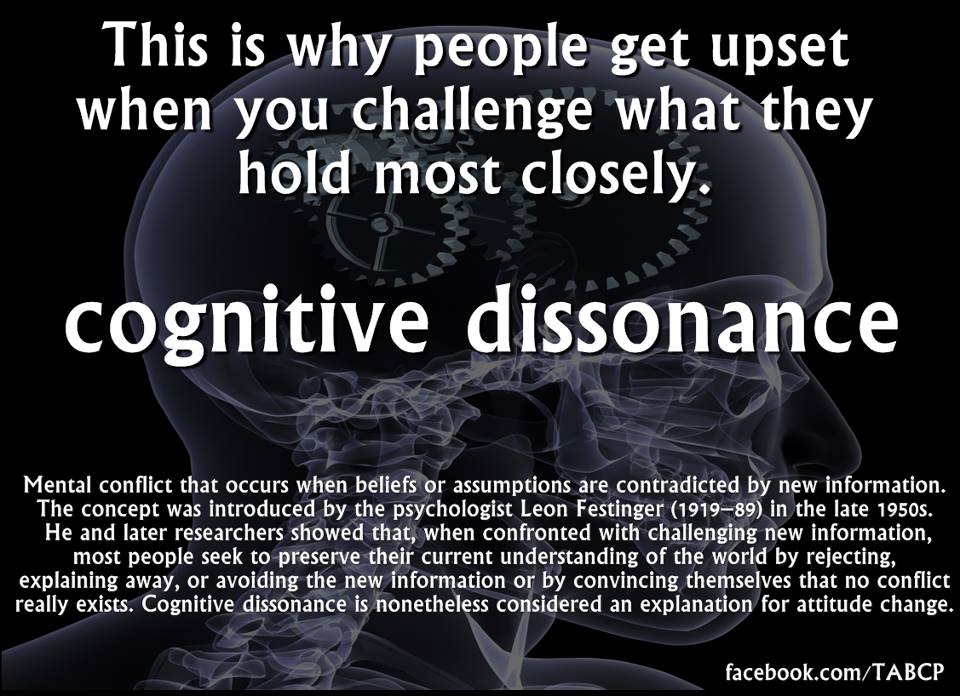 A nice example of cognitive dissonance was recently provided by Alzheimer’s Australia: 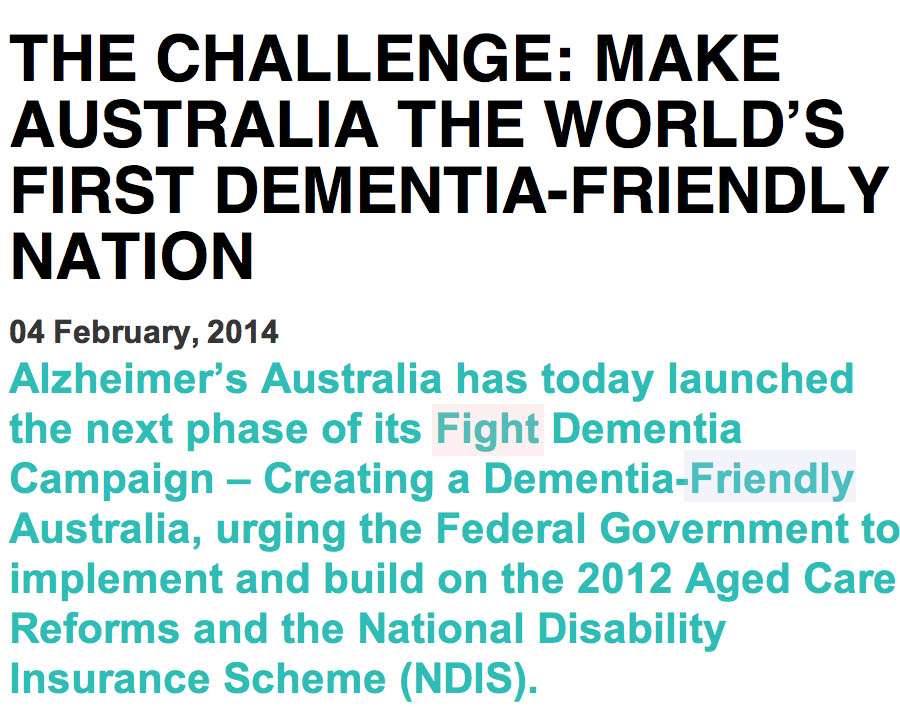 According to Festinger, dissonance reduction can be achieved in three ways:

Attitude: “I am fighting a war against dementia and will avoid any unpleasant battles.”
Behaviour: I will donate money to further the fight against unfriendly communities.

1. Change behaviour/cognition
(Ex: “I will simply not donate any money.”)

2. Justify behaviour/cognition by changing the conflicting cognition
(Ex: “I’m allowed to donate money to take part in the fight every once in a while.“)

3. Justify behaviour/cognition by adding new cognitions
(Ex: “I’ll plan a trip to the cinema to take my mind off the fight against dementia.“)

There are various paradigms used to explore cognitive dissonance further.

And cognitive dissonance can also act on the level where you make a donation, in your fight against dementia to establish a dementia-friendly community, but you subsequently have a ‘negative cognition’.

In a paper called “Donor Dissonance”: Applying Cognitive Dissonance Theory to Charitable Giving Behavior and Donor Relations” Mark Ward, Sr. from Clemson University helpfully looks at this phenomenon. In a nutshell, trying to reduce the amount of dissonance might make it more likely to donate to that charity in future.

Ward argues that “the more that post-decision dissonance is heightened by the importance of the issue at hand—and the longer the delay in deciding among equally appealing alternatives or the greater the difficulty of reversing the decision—the more individuals will have a need for reassurance.”

Quoting the work of Sweeney and colleagues (Sweeney et al., 2000), they say a fruitful avenue for exploration might be for fundraisers in charities to investigate the following affective and cognitive concerns among their major donors as follows.

Emotional: A person’s psychological discomfort subsequent to the donation decision
After I made this donation:
I was in despair
I resented it
I felt disappointed with myself I felt scared
I felt hollow
I felt angry
I felt uneasy
I felt I’d let myself down
I felt annoyed
I felt frustrated
I was in pain
I felt depressed
I felt furious with myself
I felt sick
I was in agony

Wisdom of donation: A person’s recognition after the donation has been made that the charity may not have needed the funds or that the person may not have selected the appropriate charity
I wonder:
if the charity really needed this money
if I should have donated anything at all
if I have made the right choice of donation amount if I have done the right thing in making this donation.

Concern over decision: A person’s recognition after the donation has been made that they may have been influenced against their own beliefs by the charity
After I bought this product I wondered:
if I’d been fooled
if they had spun me a line
if there was something wrong with the charity.

Clearly there’s a lot to examine there if they want to!

Some of it may lead to more effective manipulation of emotions by charities to fund-raise.