I had a terrific time between 2 and 5 September 2015 in Ljubljana in Slovenia for the 25th Alzheimer Europe conference: the theme of the conference (“Conference”) was “Putting strategies and research into practice”.

Helga managed to catch me on September 1 to invite me to come as an observer to the AGM. I enjoyed meeting Jens for the first time. This was the first time I’d seen Jean Georges chair a meeting, and there wasn’t a peep of dissent! 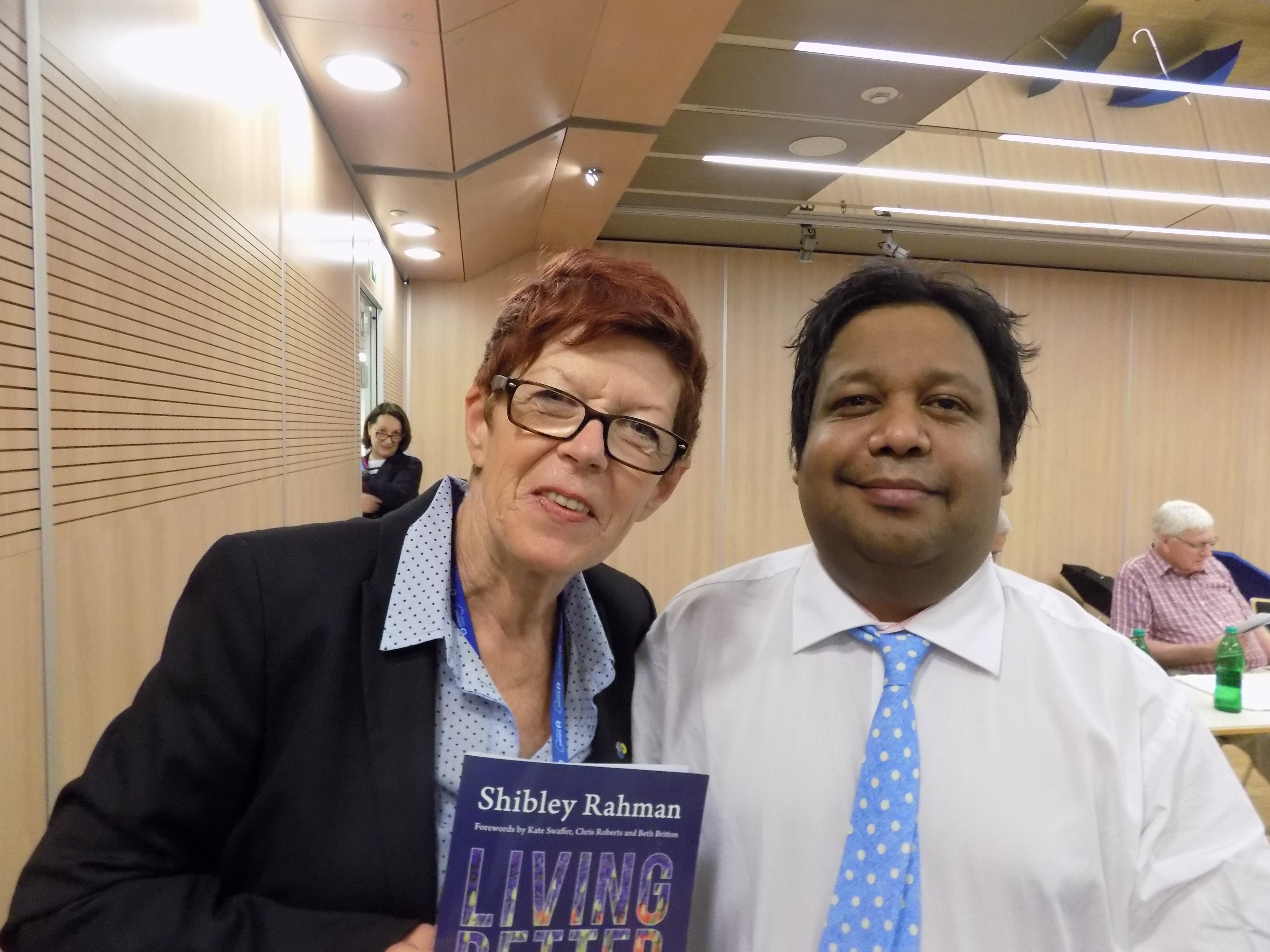 Dementia, fundamentally for me and many others, is not about the European market, but about the European people. And here it’s useful for me to see where our endeavours, nation states of the United Kingdom, fit into the rest of the world (Alzheimer Europe last week and Alzheimer’s Disease International in Australia in April 2014). A pervasive thread in the development of global policy, done more in an incremental than revolutionary way on the whole, has been the ‘featuring’ of people living with dementia and carers. It’s become clear to me that people with dementia and carers have developed autonomy as independent groups on the whole, in that their views cannot necessarily be considered to be the same. The language has shifted subtlety from ‘engagement’ to ‘leadership’.

In talking with many people around the world, it’s abundantly clear that there is no comparison with where we are now compared to a few years ago. This does not mean we still haven’t got a long way to go. An imminent problem in the English policy is the future of social care funding. In the previous few years, there has been a relentless decrease in social care funding, which has not been ringfenced. The health of the National Health Service itself is dependent on the overall wellbeing of the social care system. The policy of dementia friendly communities took us from a very low baseline, that is people with dementia not feeling part of their community. 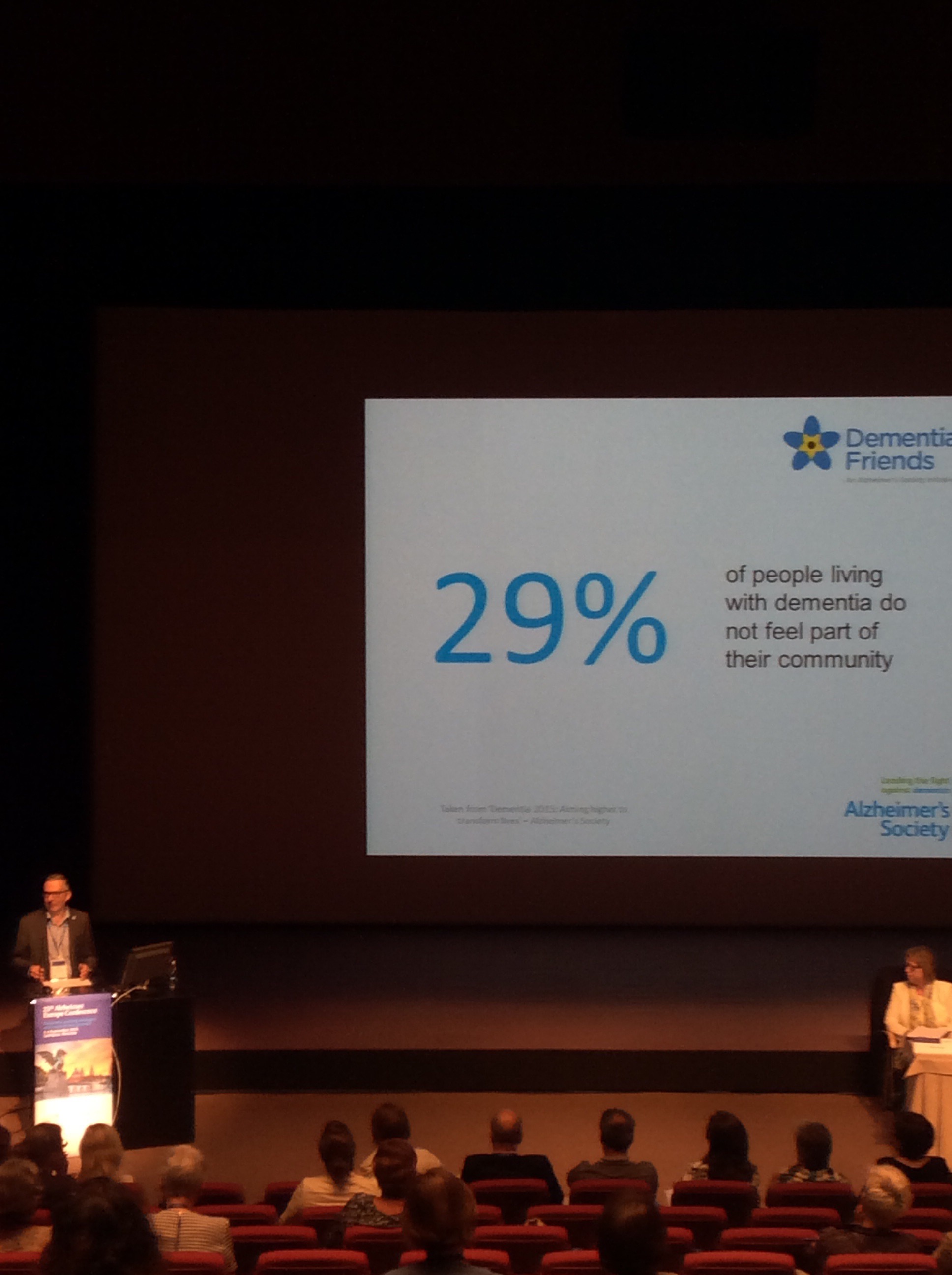 The fact that there has been such a huge sign up to ‘dementia friendly communities’ specification programme is a testament to the interest in the notion of dementia friendliness, but, as the Alzheimer’s Society will be the first to admit, this is not meant to be a tick box exercise but the start of a commitment to making a community ‘dementia friendly’. Such communities are meant to promote independent living, not isolation. 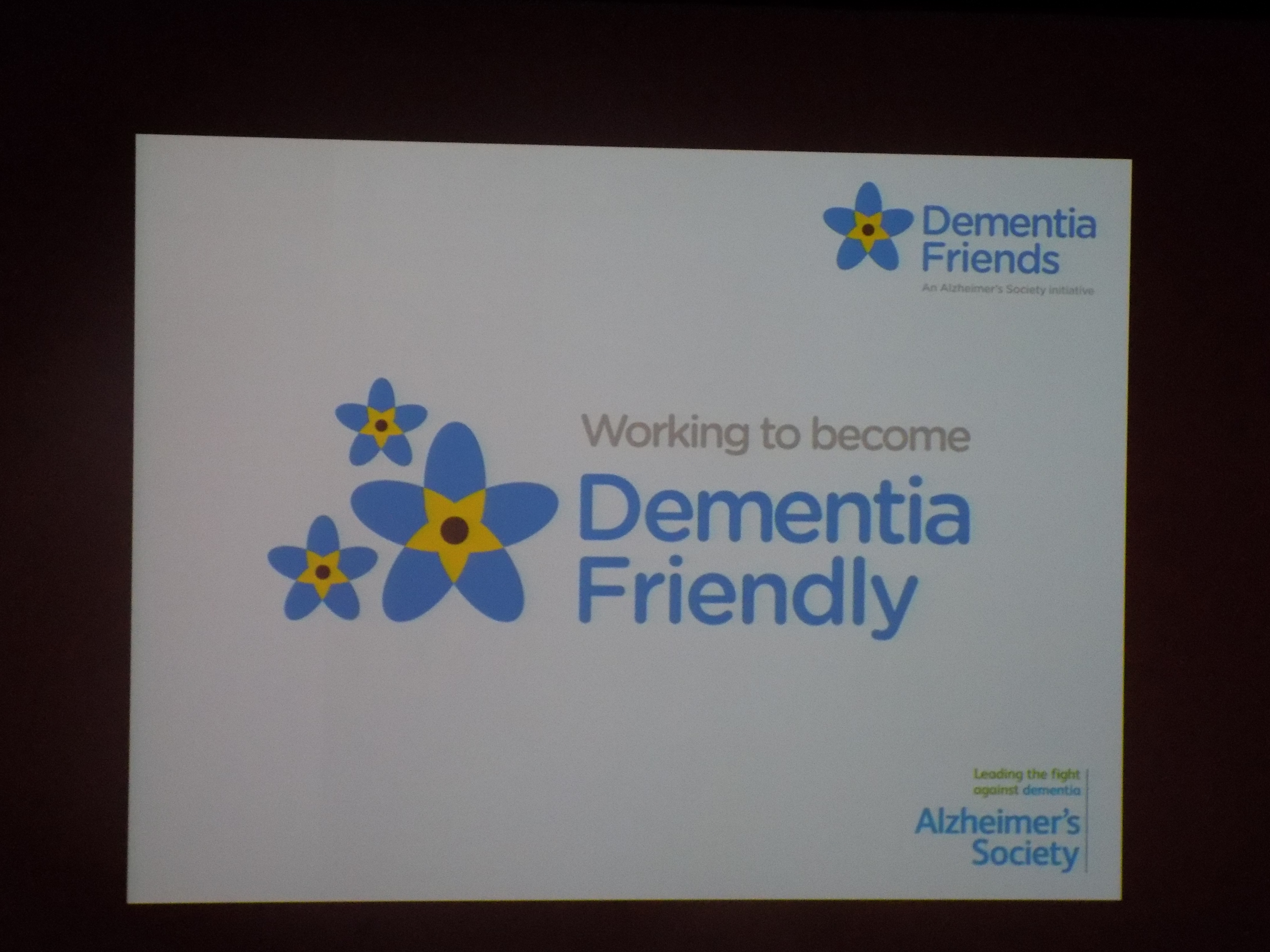 Some of the implementation of this inevitably is treating people with dignity and respect which in themselves are cost neutral, but the onus is on local authorities and employers to meet obligations under the Equality Act (2010) as the Regulations of this Act make clear dementia is a disability. The announcement by Marc Wortmann, the CEO of Alzheimer’s Disease International (ADI), will aim for ADI to be a signatory to the United Nations Convention on Rights of People with Dementia is highly significant, not least because of the clarity of leadership of the ADI in Marc and Glenn Rees, but symptomatic of a healthy relationship between ADI and international bodies such as WHO and the UN. Alzheimer Europe have had a longstanding willingness to sign up to the UN Convention. These developments, whilst gradual, all act together to make equality a reality, giving people with dementia true ’empowerment’ as nation states become accountable for their behaviour.

I am incredibly curious as to what other nation states think of the UK’s ‘Dementia Friends’ programme. ‘Dementia Friends’ is a mechanism, having started off in the UK in England, by which any member of the general public can sign up for a short 45 minute information session containing activities to learn about some basics of dementia. You don’t need to have heard about dementia beforehand. It’s a programme which is run by volunteers who themselves get trained up from the ‘Dementia Friends Champions’ programme. Fundamentally, our international colleagues are very impressed, and some blatantly envious.

But the endpoint, as such, is not whether there are one million or 4 million dementia friends, but it is encouraging that more than one million ‘dementia friends’ exist in the UK. All dementia friends have been encouraged to turn their understanding into a simple pledge, and it doesn’t matter how large or small this pledge might be. It could, say, write to a local newspaper to complain about the language referring to a person living with dementia if deemed derogatory. The Dementia Friends campaign, which was clearly signposted in the 2009 England National Dementia Strategy “Living well with dementia”, has helped to turn around the giant supertanker that is prejudice and discrimination towards dementia.

I hate military analogies, but all this means that the “war against dementia” is over. It is not in fact a “war against dementia”, but a war against poor dementia care standards, or a war against bigoted prejudice against people living with dementia. There is so much that can be done through a national programme, but the fact that there has been one at all, which has run smoothly, is a huge achievement. To take further the military analogy one is reminded of ‘Mission accomplished’. The “Mission accomplished” speech by George Bush from 2003 is extremely well known. It arises from a large barrier shown on the USS Abraham Lincoln aircraft carrier stating ‘Mission accomplished’, at a time when the vast majority of casualties were yet to occur. We don’t have a working definition of ‘post diagnostic care’, but Geoff Huggins at the Conference presented an overview of the various EU workstreams involved.

One such work stream, for example, is in residential care. 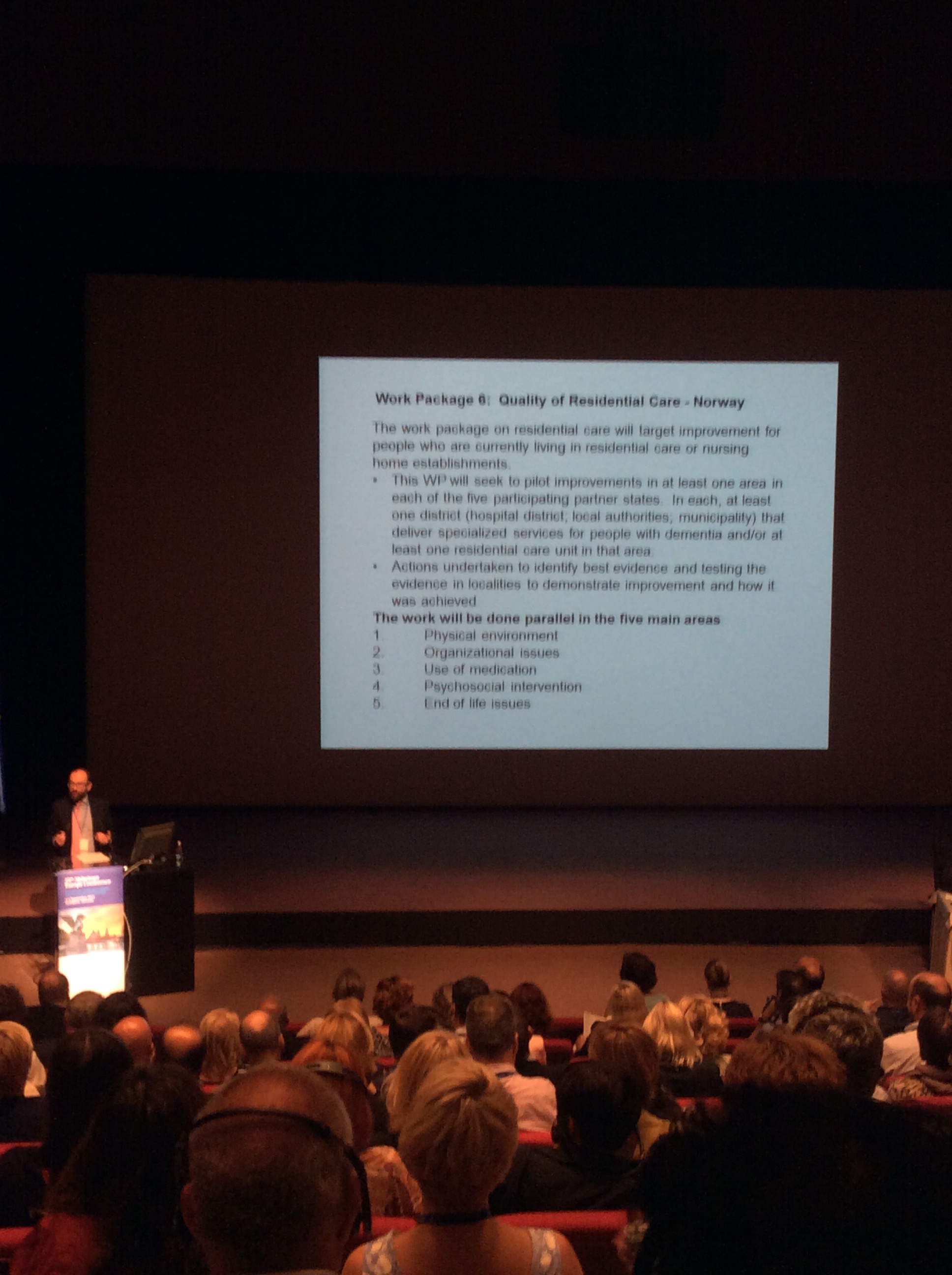 I’ve now heard Jeremy Hughes, CEO of the Alzheimer’s Society, speak about Dementia Friends several times now. And, a bit like giving the Dementia Friends sessions myself as a Champion, I always glean a tiny incremental addition every time. 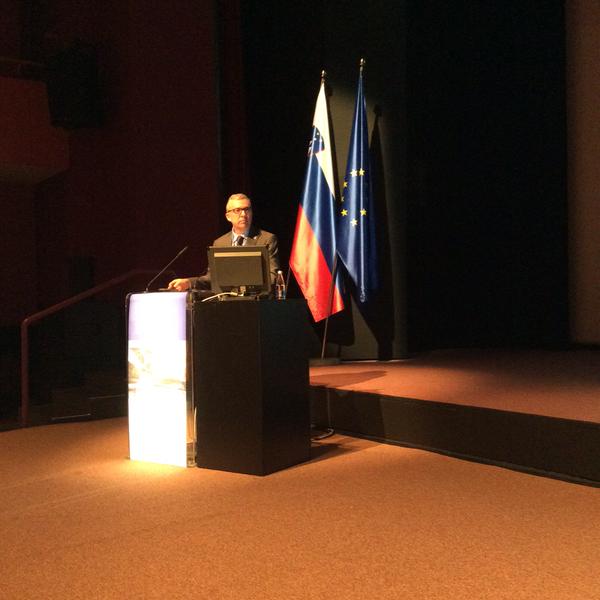 I recently reviewed diversity in dementia around the world in my thesis ‘Living better with dementia‘, with forewords by Kate Swaffer, Chris Roberts and Beth Britton. It’s quite easy to under-estimate how bad it can be for people with dementia living abroad, but I feel that we can learn from other jurisdictions and their awareness campaigns.

Here was the context in Morocco presented last week – an example of a very successful awareness campaign instead. 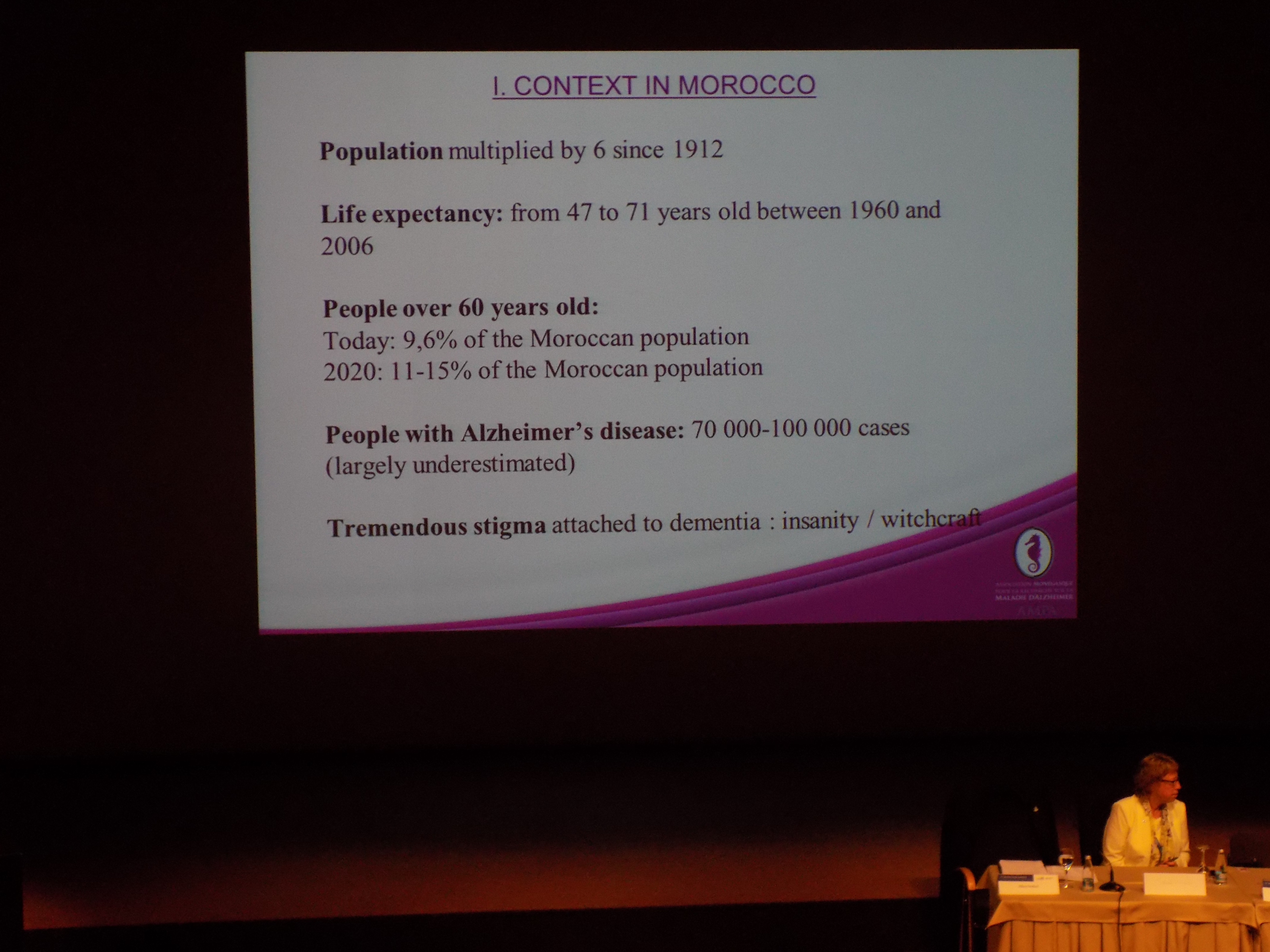 On the other hand, I have reviewed abstracts where there’s been, say, a release of balloons signifying an ‘end to Alzheimer’s’, but one does wonder about the efficacy of such publicity stunts in making a real difference. That difference is whether people with dementia are accepted in society as equals and as valued citizens. I’ve been hugely impressed with developments from the Alzheimer’s Society Ireland, notably their ‘Listen, learn, link ‘ campaign (“#forgetthestigma”). 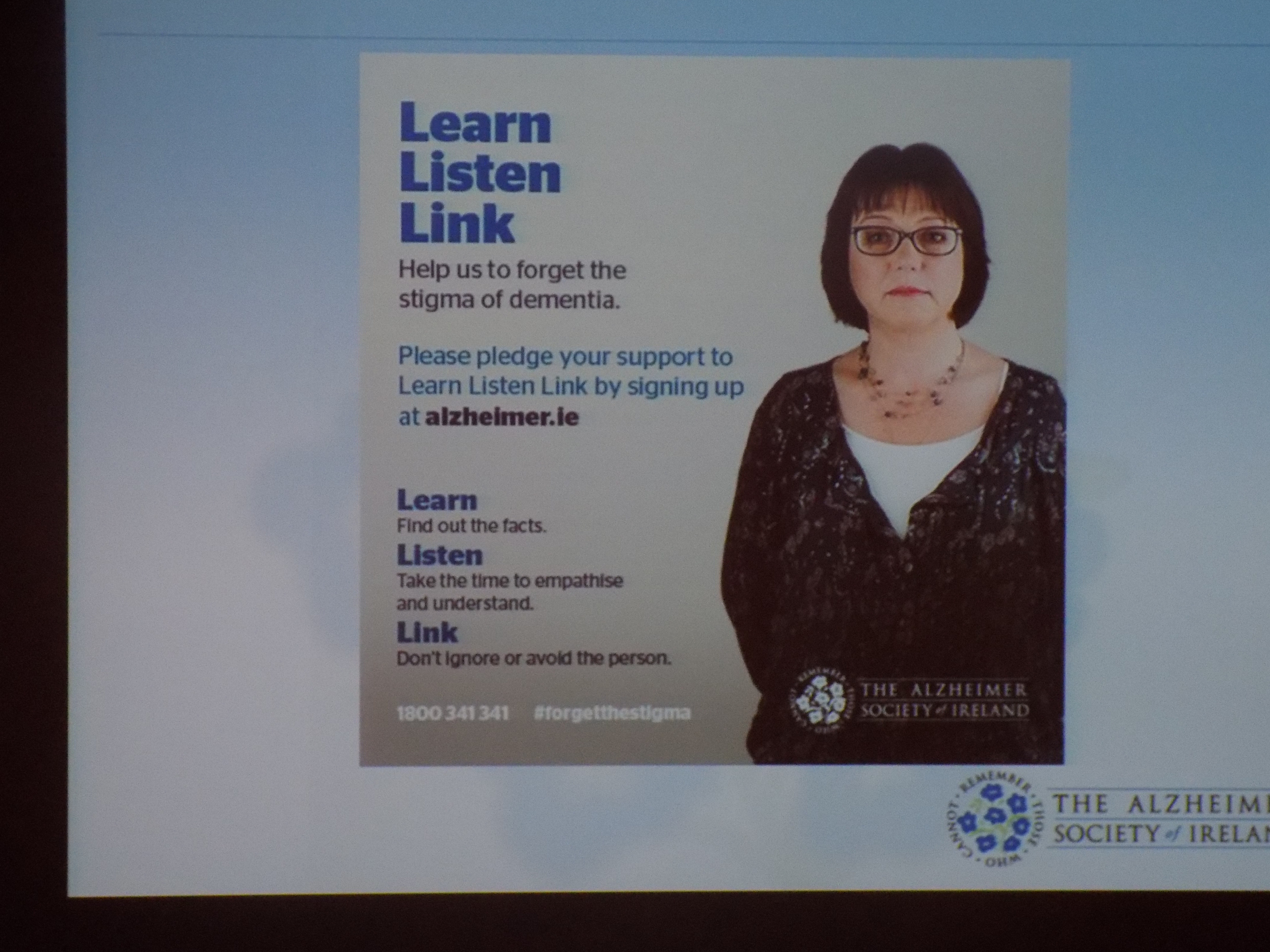 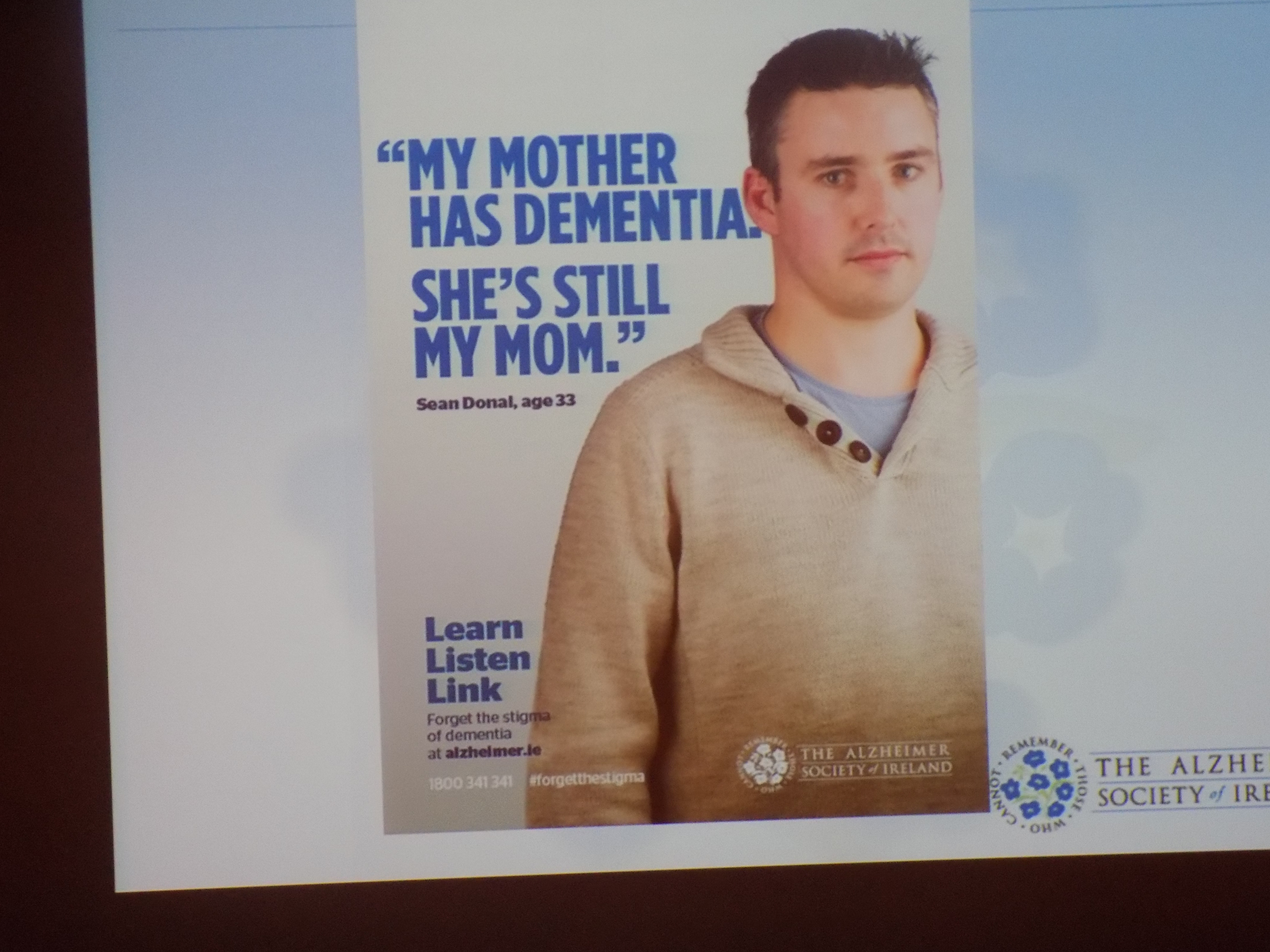 And the ‘out of the shadows‘ campaigning theme in Ireland has been effective. This reflects the notion of some people living with dementia becoming ‘warehoused’ and given inappropriate antipsychotic medications, for example. At worst, we occasionally hear about physical restraint which clearly implicates human rights. At another level, it’s about people in society simply being able to say ‘I live with dementia’, and not then be the recipient of funny looks, or pity.  Helga Rohra, Chair of the European Working Group of People with Dementia. is another such person who has emphatically come ‘out of the shadows’. 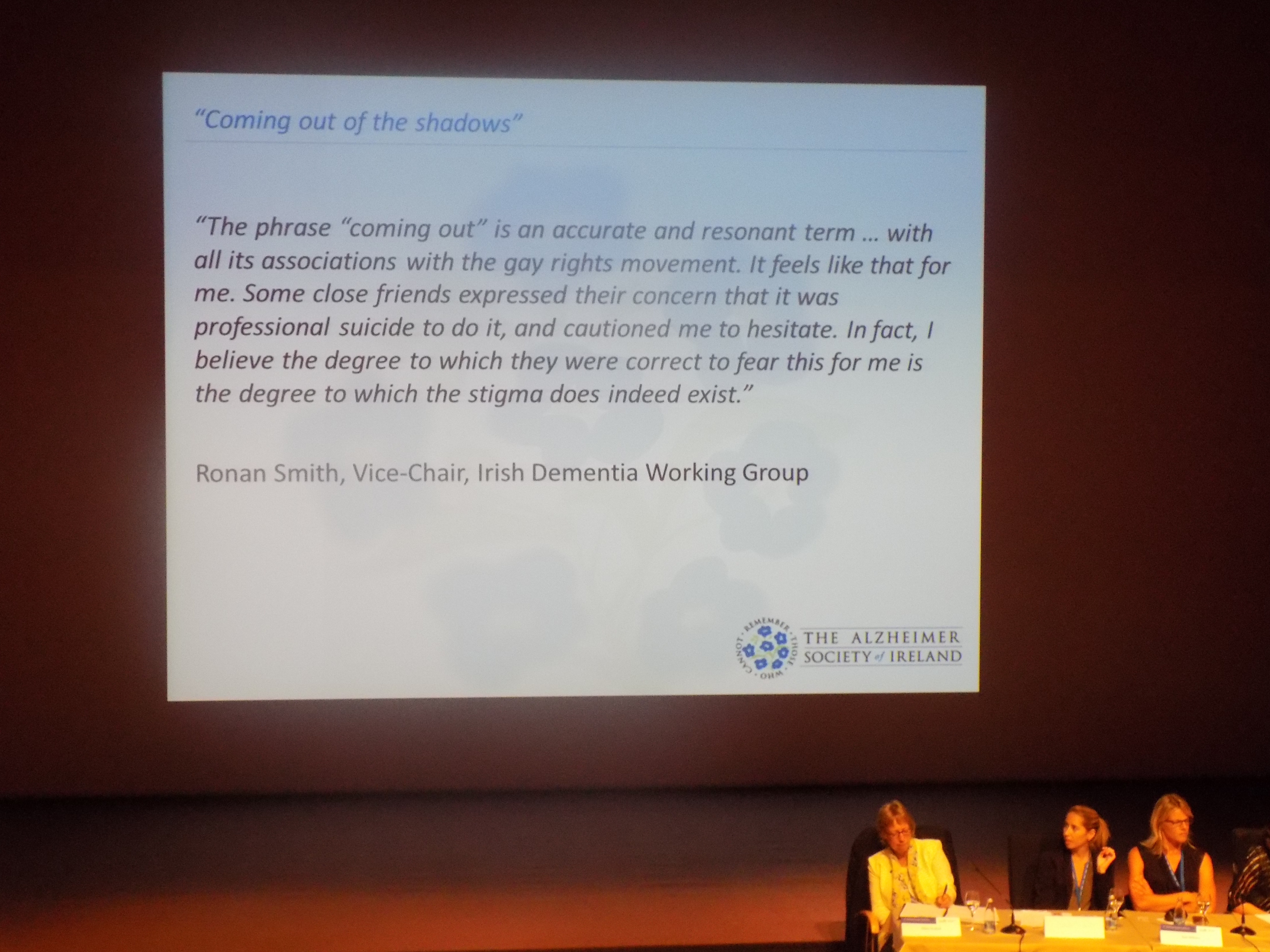 There has been a shift in tone and content in reporting on dementia in mainstream media too, I feel. The progress has been sluggish perhaps, but it’s evident. I have found myself finding stigmatising language in the headline of a very positive story about dementia many times. 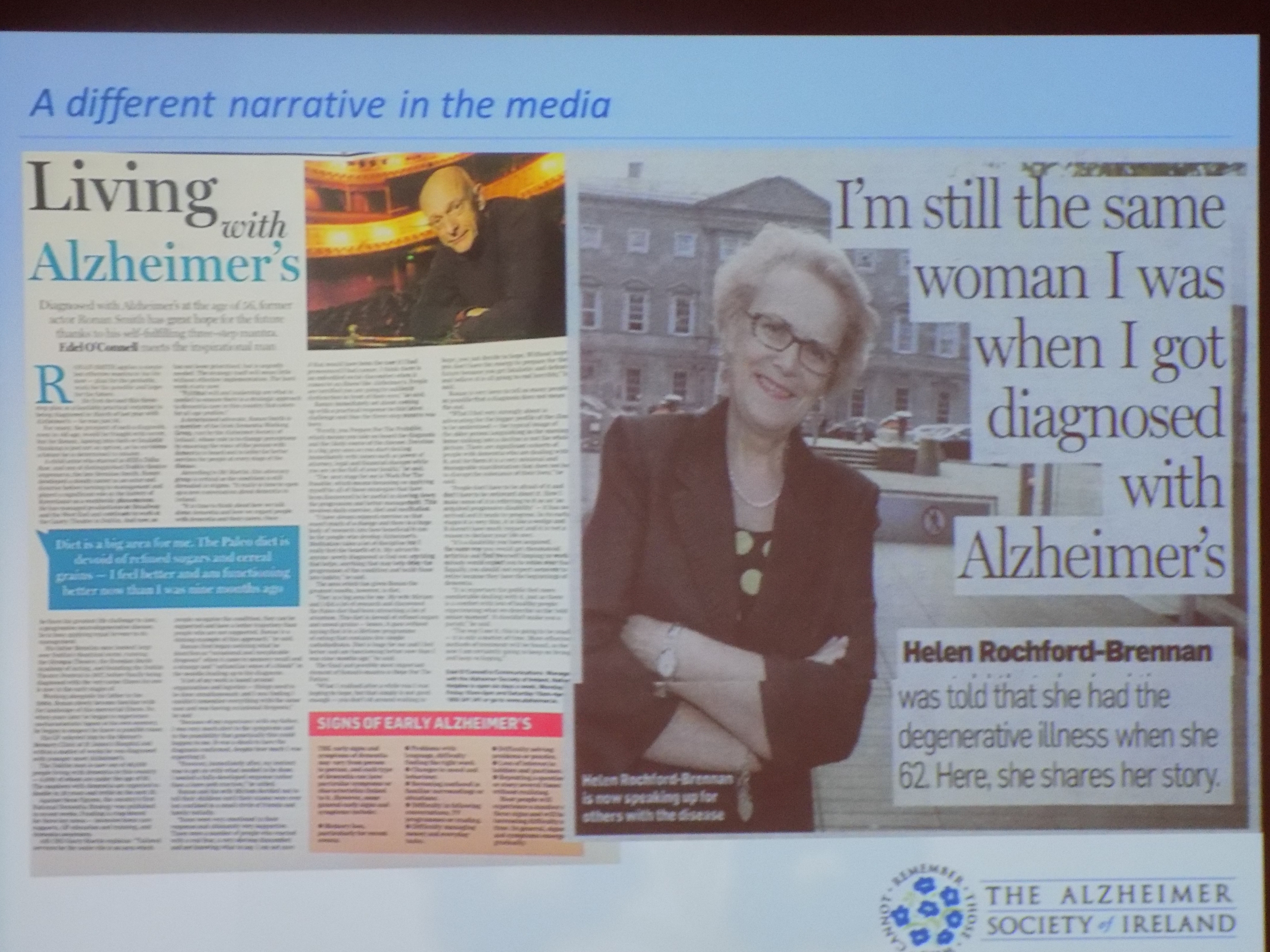 I have written many times on the potential weaknesses of the term ‘Dementia Friends’ in inadvertently and unintentionally promoting otherness and victimhood, but one can only assume that ‘Dementia Friends’ is consistent with the drive behind building ‘dementia friendly communities’. The narrative of ‘dementia friendly communities’ has definitely evolved further to ‘dementia inclusive communities’ or ‘dementia accessible communities’, but the term ‘dementia inclusives’ would certainly seem odd to many. I have likewise had qualms about ‘#dementiachallengers’, in that it’s unclear to me what the challenge is – although one challenge certainly is the lack of prioritisation of social care funding and training in dementia. Nonetheless, logically, one can only assume #dementiachallengers have a common bond in working on the Prime Minister’s Dementia Challenge. 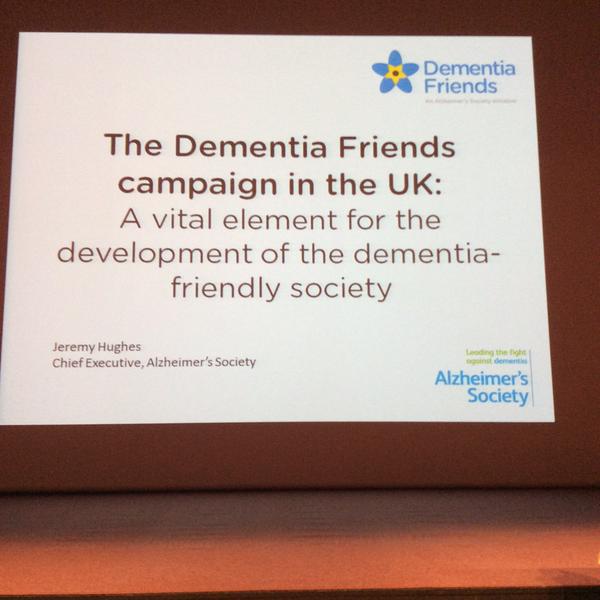 I have had the hundred or so ‘Dementia Friends’ I have ‘created’ produce very diverse pledges. I have been struck though at the genuineness and sincerity of these pledges though. These have included a salaried GP thinking about how to talk about dementia with patients more effectively, or a nutritionist in training to thinking about how to promote eating well with dementia on a hospital ward. 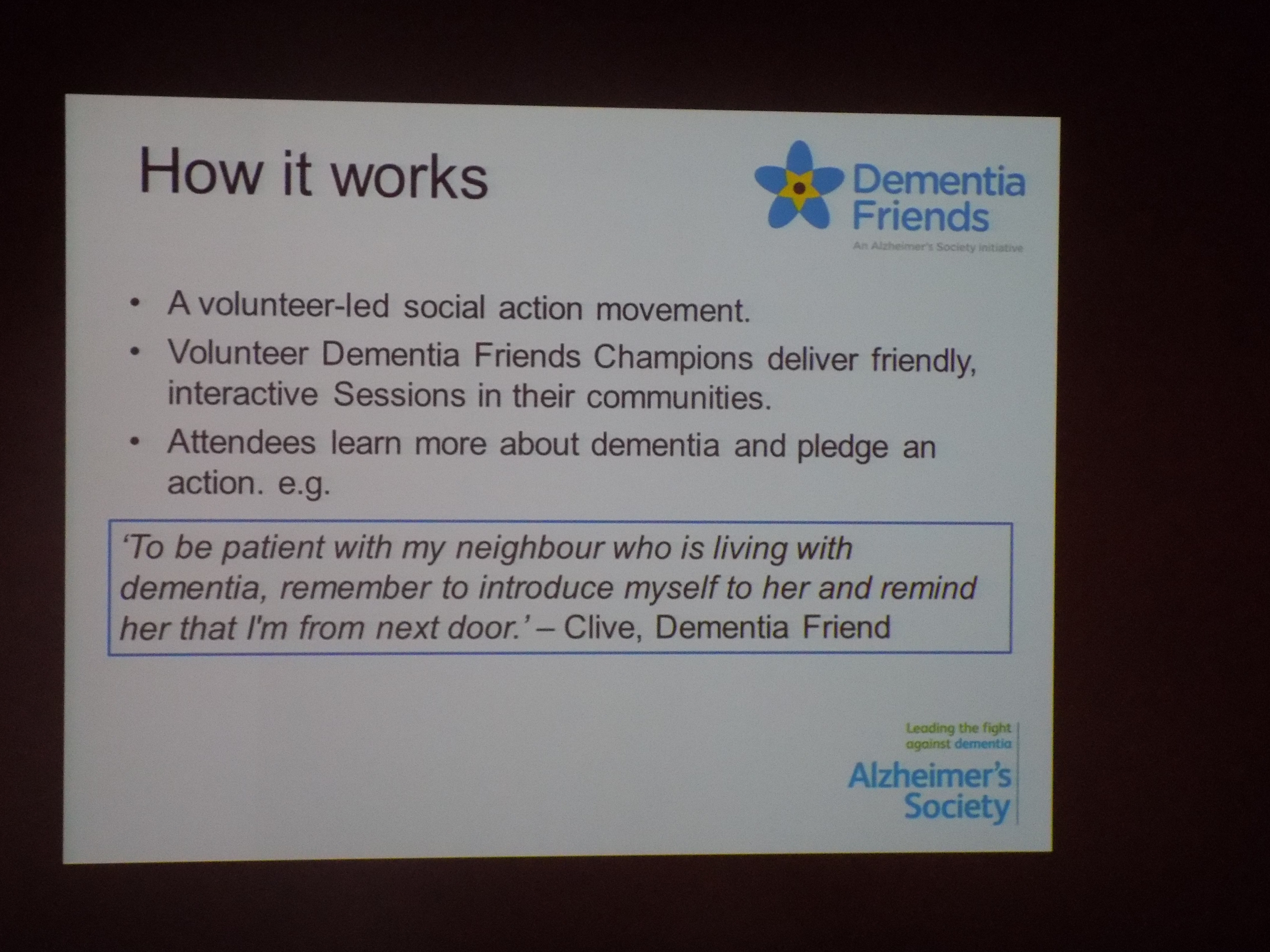 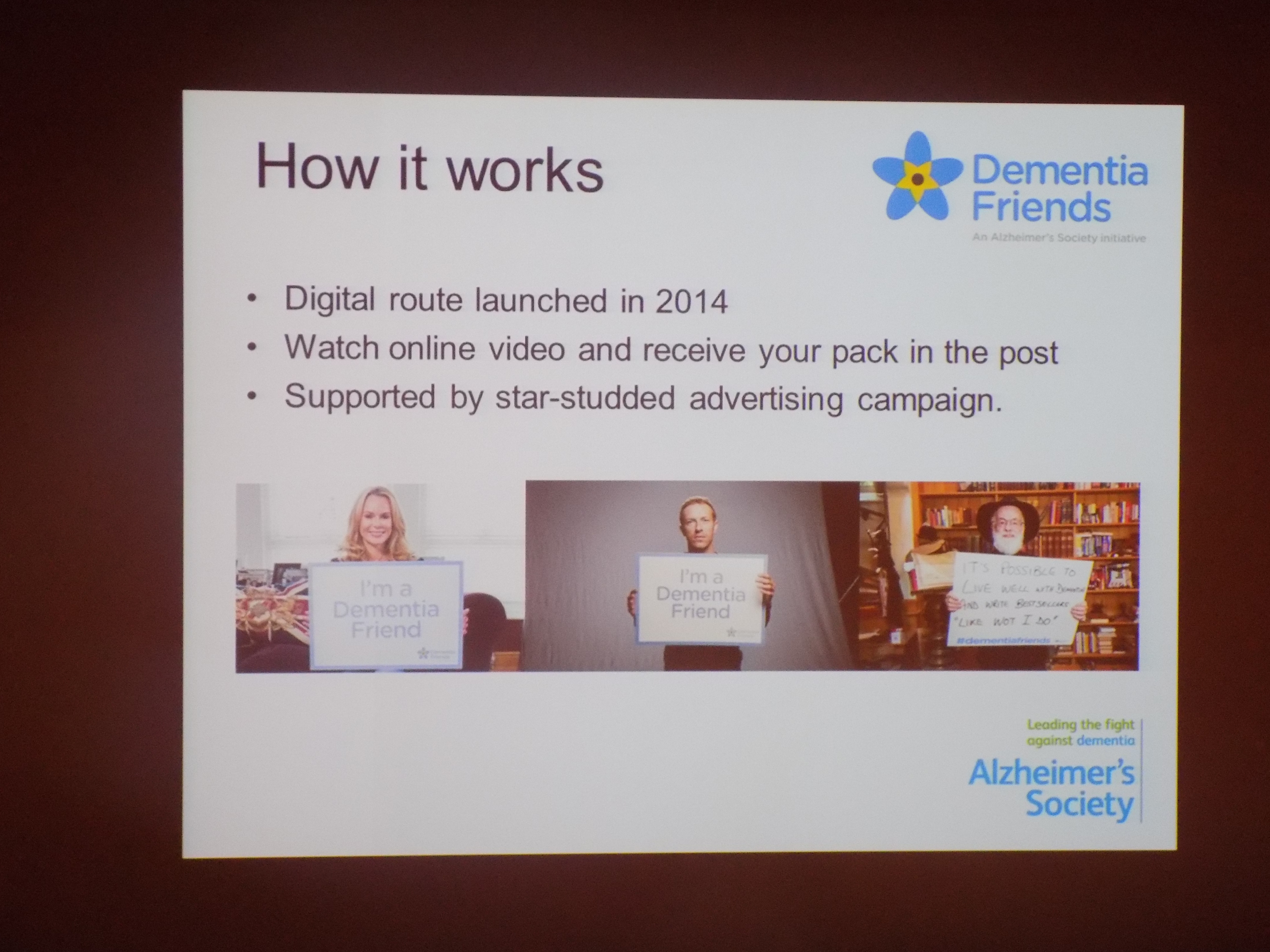 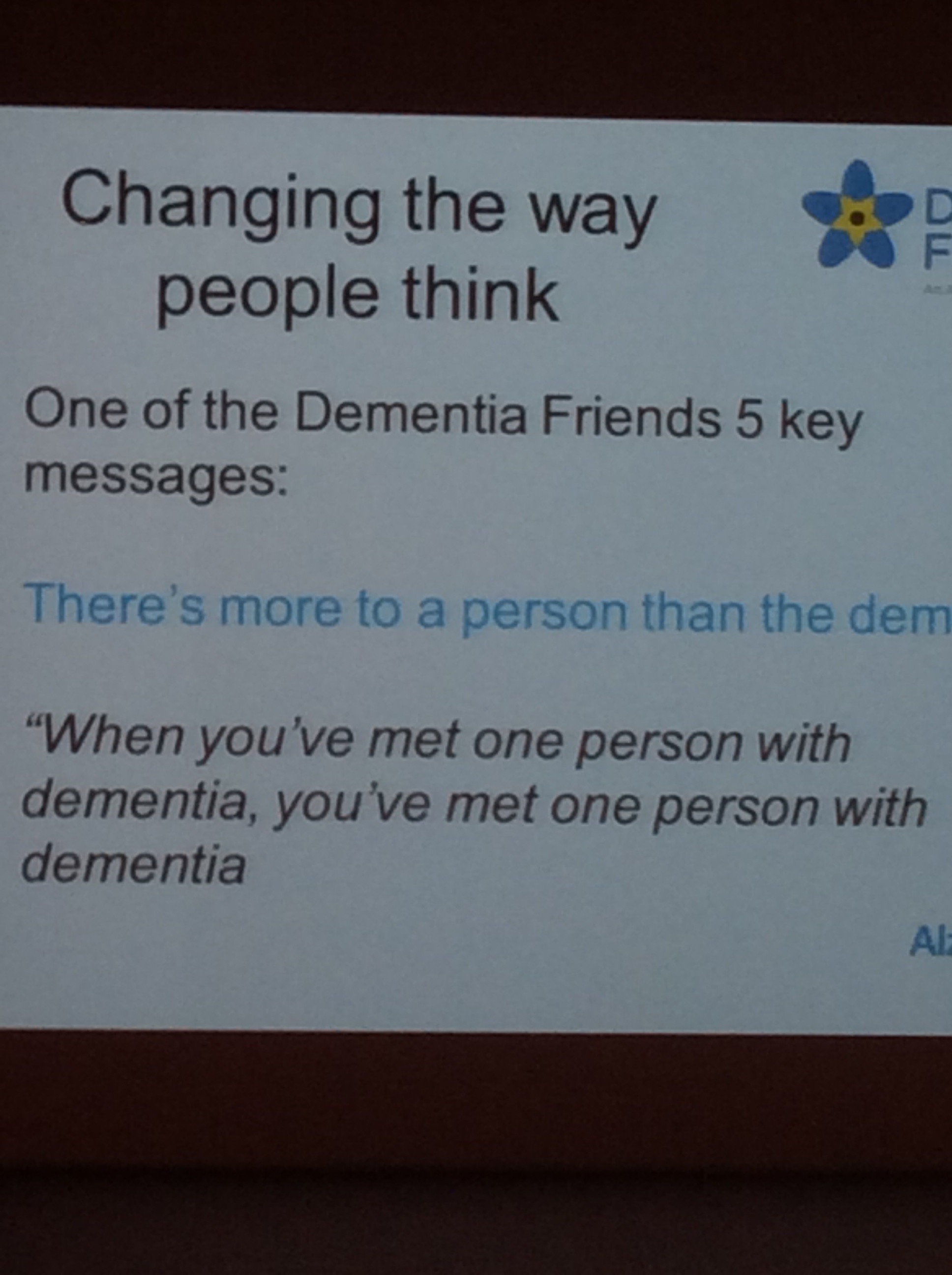 I think changing the way people talk is going to take time – and the potential danger is of course preaching to the converted. I think tackling this might involve something as fundamental as making sure responsible reporting of any mental health issues, including dementia, are on journalism courses. Journalists pride themselves inevitably on their high degree of professionalism, so they shouldn’t be coming up with such facile headlines on such a regular basis. 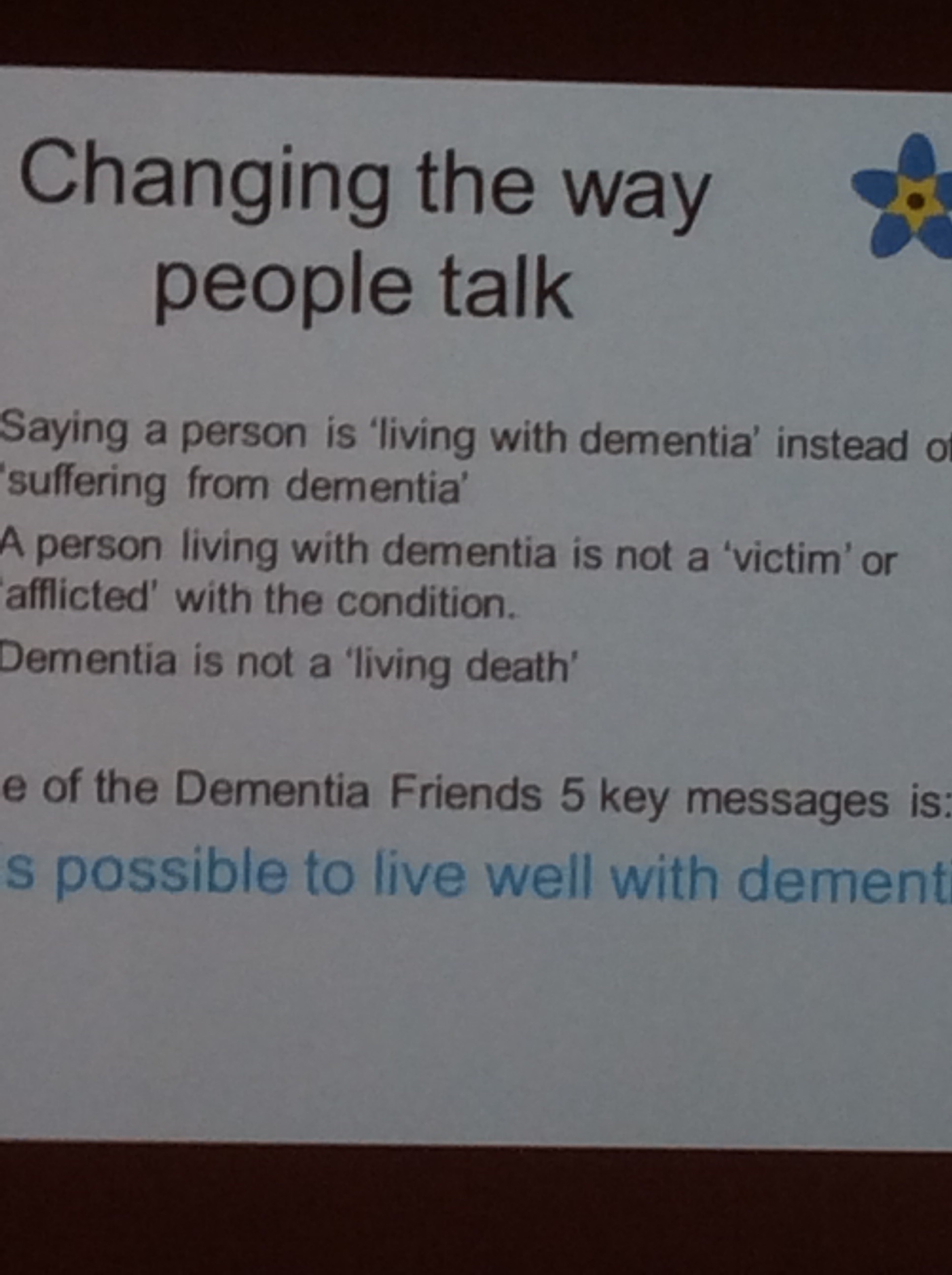 The Alzheimer’s Society are part of a wider international narrative about the creation of dementia friendly communities. As an aside, there is quite an interesting conversation to be had about whether residential care (including care homes) are part of the ‘community’ – and many strongly believe that they are indeed ‘community hubs’. The danger however for ‘Dementia Friends’ is that becoming a ‘Dementia Friend’ becomes a quick fix for private care providers to say staff are ‘trained’ in dementia. The Alzheimer’s Society are very clear that Dementia Friends is not ‘training’ for such a responsibility or rôle, and to imply that having signed up as a Dementia Friends means that you are of a sufficient standard in dementia to care in a care home is wrong. The current manual given to all Dementia Friends Champions states categorically that the Dementia Friends sessions are not ‘training’. I personally though would like to see the development of accessible training for people in caring roles at home or in residential homes, but the questions remain cost, equity, and quality. Possibly a ‘Dementia Friends Plus’ for professionals interested in an extended period of such service improvement might be part of the solution at least. 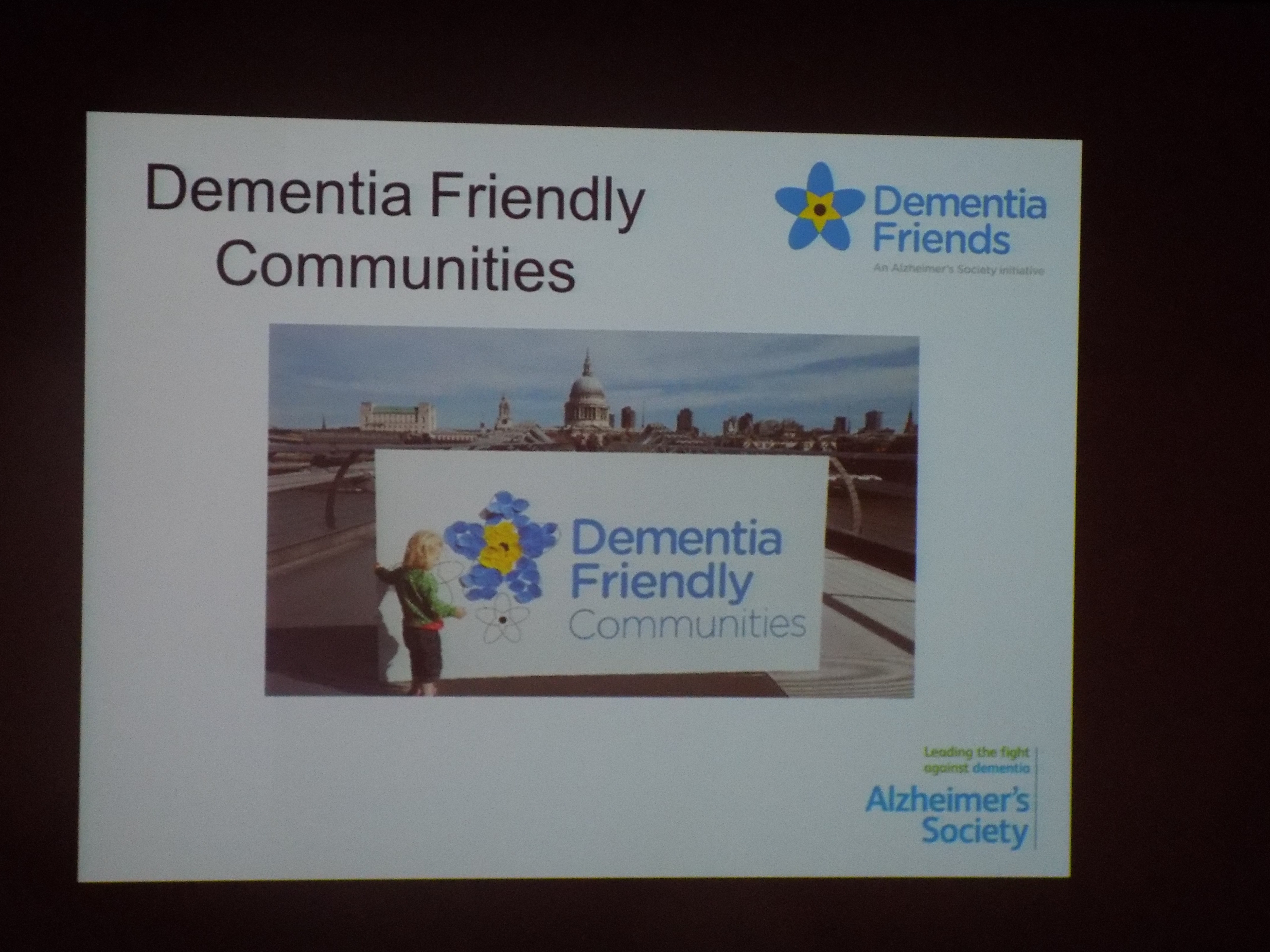 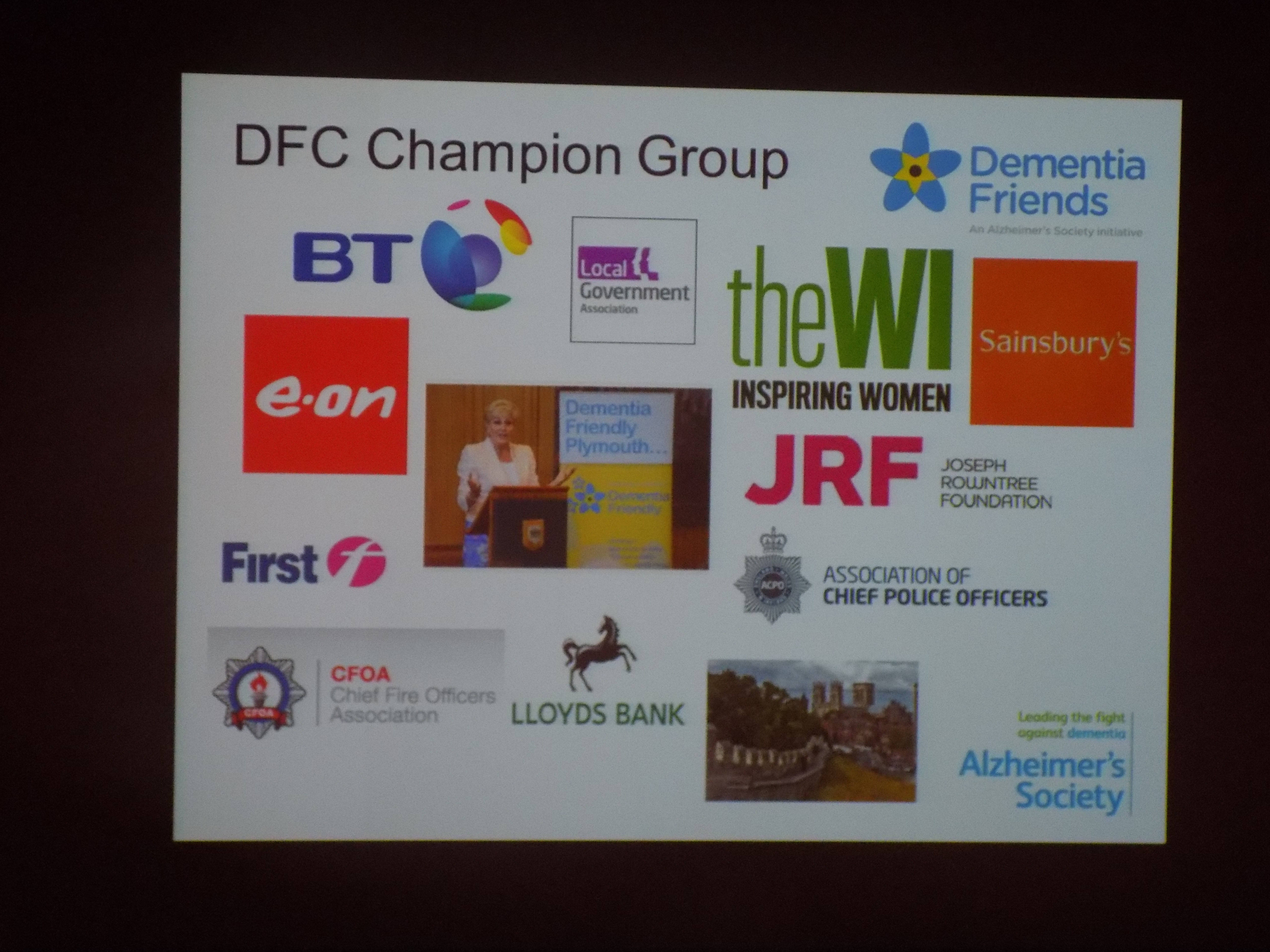 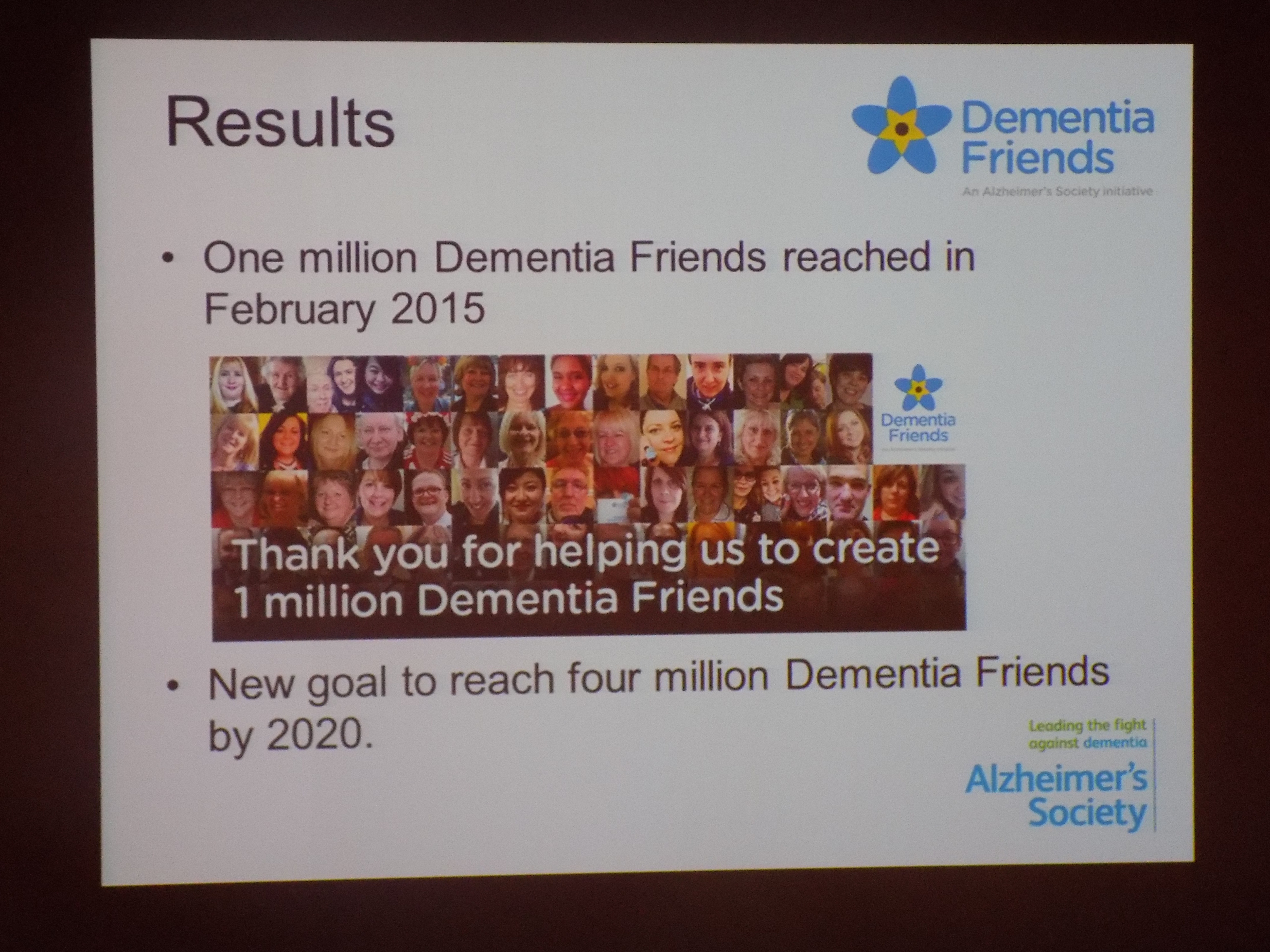 The Alzheimer’s Society of course do not work in isolation. The voluntary sector as a whole is vital in ensuring support for people with dementia and carers, but should not be expected to be doing so in the context of relatively underfunded services.

It’s hard to ‘measure’ the ‘success’ of Dementia Friends, and indeed I have brought up the issues of relying on the ‘numbers game’ in proving an initiative’s worth. 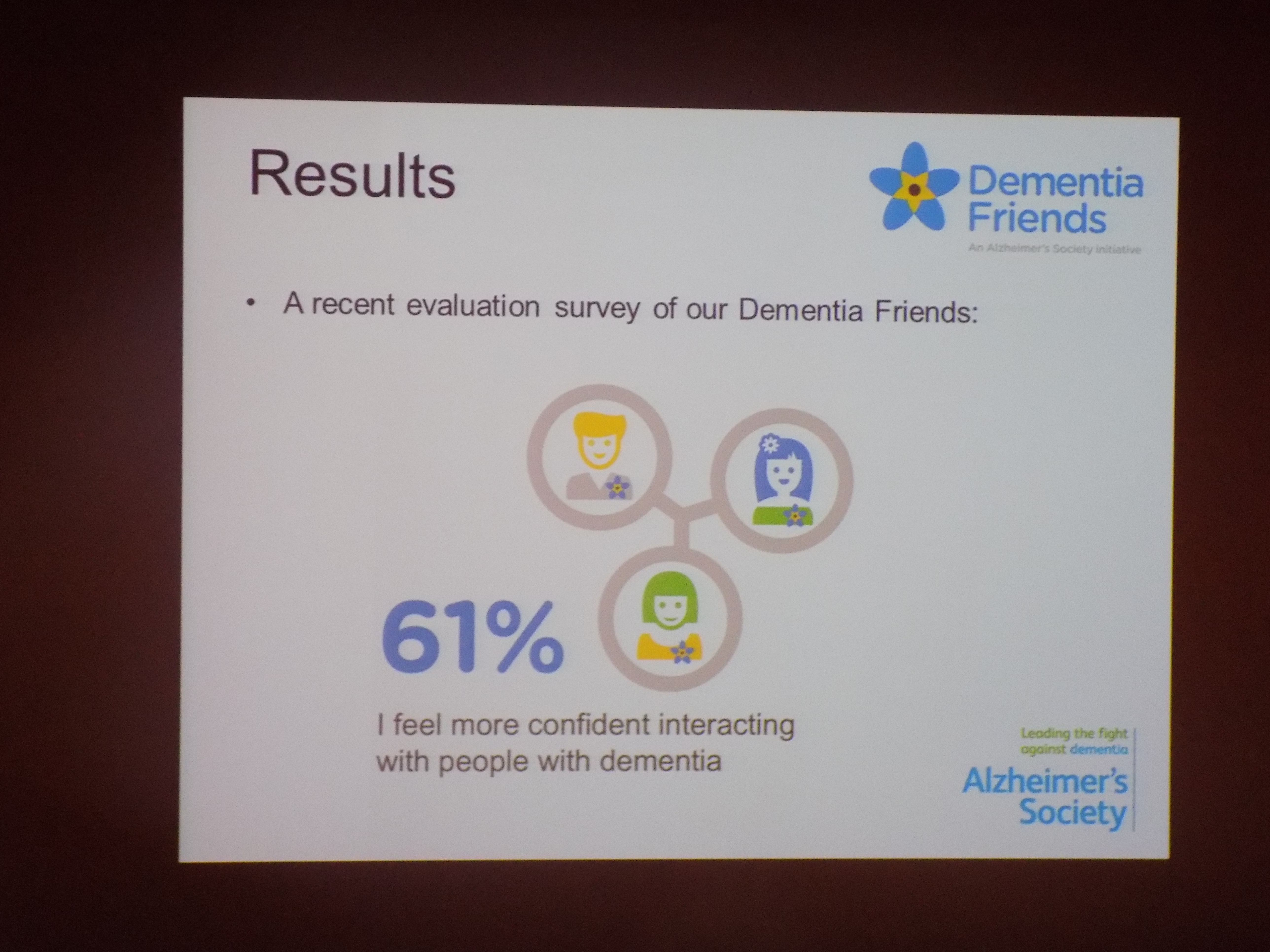 We do live in times where everything does have to be costed carefully. I think we do need to be thinking about having the system properly resourced at all levels, including acute hospitals, primary care, hospices, dementia advisors, dementia support workers and clinical nursing specialists, but all interventions have to be financially do-able as well as promoting health outcomes. I even said so in my own talk in Ljubljana (and thanks very much if you managed to make it there!) 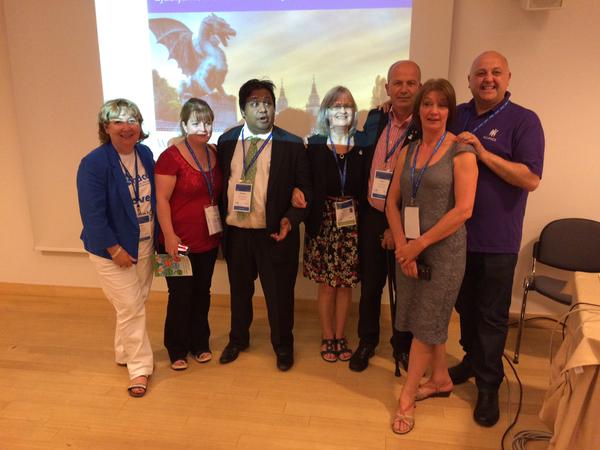