We are continually being reminded that ‘money does not grown on trees’. Funds are said to be ‘unsustainable’. You’ve heard it all before.

And yet there is potentially a scanty evidence base for certain initiatives in the NHS, where every penny does count. For every contract awarded, there’s an equal and opposite contract which has not been awarded. Recent problems in health policy to do with the English NHS shows a genuine problem with trust, whether it’s implementation of the Health and Social Care Act (2012) or “Care Data”.

As entities get bigger, their presentation tends to get slicker. With economies of scale, things can be done more ‘efficiently’. The overwhelming danger is that everything becomes alarmingly centralised, actually deprofessionalising and lowering standards of what is being delivered. It can become all too easy to run courses, get the facilitator to run the DVD and read a pre-prepared script, and, even if the end-user doesn’t pay for it, the taxpayer does.

But the culture in the NHS is not right. People are scared to ‘speak out safely’ against practices which they do not agree with, even if the reasons are perfectly sound. The pattern of behaviour at people who have criticised, with good intentions, in healthcare has tended to follow a similar pattern: ignore – discredit – attack – ignore – ostracise. But increasingly as the same grant winners tend to get more grants, as they built up a dominant presence and brand loyalty, they are in a position to flex litiginous muscles.

It all has an “Emperor’s New Clothes” feel about it. “The Emperor’s New Clothes” is a famous short story by Hans Christian Andersen about two weavers who promise an Emperor a new suit of clothes that is invisible to those unfit for their positions, stupid, or incompetent. When the Emperor parades before his subjects in his new clothes, a child cries out, “But he isn’t wearing anything at all!” And that’s the position we’ve reached with various prestigious brand leaders.

And yet it is fundamentally an anethema to the whole basis of personhood as conceptualised by Tom Kitwood. There is an increasing army of people who are quite horrified, like me, how personhood has become transformed into marketing shills and glossies in a standardised package corporate-feeling sort-of-way.

There’s certainly concern about how dementia training and person-centred approaches have become commercialised, in a way that would have made the late great Tom Kitwood shudder.

I get the distinction, I am one! Sadly in practice that is not how it’s being used @SteveMilton1 @legalaware @IanMcCreath

Kitwood’s approach was more conceptually and theoretically developed, and highlights the importance of the person with dementia rather than the disease process itself. Kitwood argues that people with dementia do not lose their personhood, but rather can be maintained through relationships with other people.

Thus, Kitwood defines personhood as ‘a standing or a status that is bestowed on one human being, by another in the context of relationship and social being’. Within person-centred care therefore, the personal and social identity of a person with dementia arises out of what is said and done with them.

In other words, it IS highly personal and individual.

Anyone who has worked in the NHS knows likewise that one junior doctor covering all the medical wards in a hospital and acute admissions is bound to be rushed off his or her feet. Any emergency room nurse facing the common situation of being ten patients behind will know exactly how stressful the job is, propelled by ‘efficiency savings’ the NHS “MUST” make to resolve the “funding gap”.

A concerning strand has emerged therefore of marketising and selling compassion. This is a very strange concept as it implies that compassion in some way can be “imposed”.

In October 2013, it was mooted that  unregistered care support workers wouldsoon have to obtain a “care certificate” to show they have completed basic training before they are allowed to work unsupervised, the government has announced.

Health minister Earl Howe has revealed that Health Education England would lead work on developing a certificate of fundamental care, as recommended by Camilla Cavendish in her review of regulation and training in the sector earlier this year.

He said it was too early to know what the care certificate would look like, but said it would build on the national minimum training standards published by Skills for Care and Skills for Health in March, as Cavendish recommended.

This policy plank is incredibly difficult, for fear that the implication is that certain care staff are deliberately ‘withholding’ compassion. But it is patently more of a problem that junior care and nursing staff are in certain cultures finding it very difficult to speak out against unsafe levels of staffing cuts (a common strand in the dangerous ‘Keogh trusts’.)

The way some commissioners are tending to behave is fair-and-square a ‘tick box’ culture. What are we doing today?

And “D” for dementia friendly communities.

A Dementia Friends Champion is a volunteer who encourages others to make a positive difference to people living with dementia in their community. They do this by giving them information about the personal impact of dementia, and what they can do to help.

It is not supposed to be specialist in training for dementia.

But it can be argued that the whole set-up of Dementia Friends and Dementia Champions gives their organisers an advantage. It must have a business model somewhere, and presumably the Alzheimer’s Society is working with the current Government to deliver this initiative? Virtually every newspaper article about dementia these days mentions ‘Dementia Friends’. Parliamentarians mention it. And yet there is no mention of other dementia societies, such as Alzheimer’s BRACE or Dementia UK. For every penny in one direction, a penny is lost in another direction.

A strange phenomenon is that you don’t need to have any particular experience or skillset to be a Dementia Friends Champion.

This level of standardised packaging of ‘a training’  therefore has two inherent problems. Firstly, it denies the whole ethos of Kitwood’s bestowment of personhood. Secondly, it lends itself too easily to a ‘tick box’ culture from commissioners who can say ‘they’ve done dementia’ in a race to the bottom. And people who’ve done the Dementia Friends often report a dubious relationship about whether it is or it is not the Alzheimer’s Society, parking aside the statement that “Dementia Friends is an Alzheimer’s Society” initiative at the bottom of the ‘Dementia Friends’ website.

If a charity is being supported by Government in delivering the Dementia Challenge, this should be made much much clearer. This is because the charity ‘market’ is itself being distorted. And furthermore with access to the media commercial endorsements can deprive others of media attention, while ‘picking winners’.

Certainly the staff at the Alzheimer’s Society are brilliant, and totally devoted to the cause.

This was Ian McCreath today.

@legalaware some AS staff are DF champions (myself included) but all do so entirely on a voluntary basis and on our own time.

and this emphasising that ‘Dementia Friends’ like the NHS is ‘free at the point of use':

Apparently the intention is that “Dementia Friends” is not ‘training’ as such:

@legalaware target is to reach 1 million DFs. Not marketed as training nor delivered as such. Model based on similar initiative in Japan

But there is unfortunately a perception of “training” from two separate sources:

and they weren’t the only ones:-

Peculiar, I have also encountered this – in their words “it’s free training” with a trusted brand @SteveMilton1 @IanMcCreath @legalaware

Oh, worth adding, the words of a care provider who is being paid to provide care @SteveMilton1 @IanMcCreath @legalaware

but this is also true it turns out in terms of where the money is actually coming from: 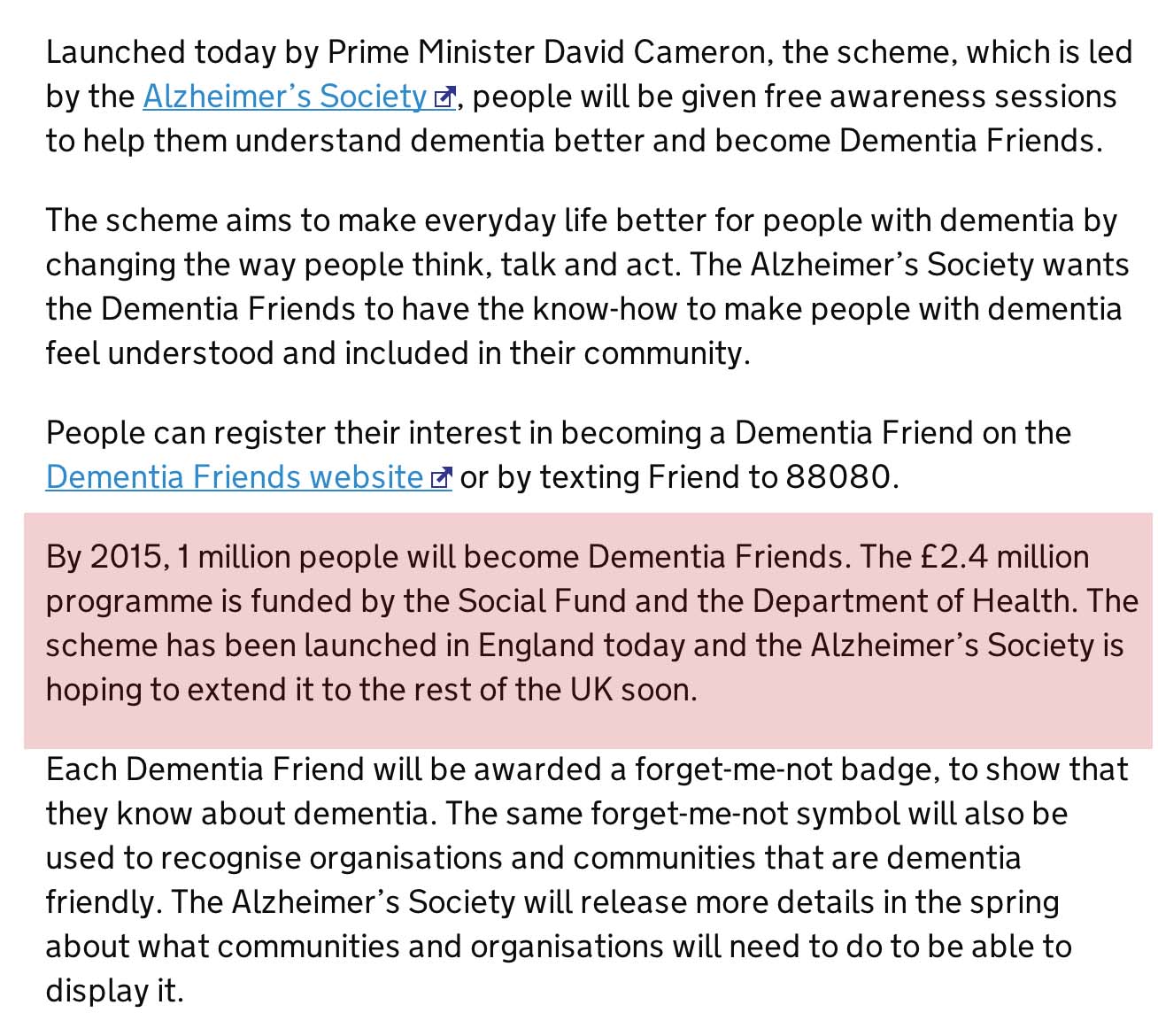 so the money must be going somewhere.

Dementia is clearly a ‘good market’, and so is ‘compassion’ despite inability of some people in being to define it properly.

Nobody is denying the rôle for both to be prominent planks in English dementia policy, but the public needs to have trust that these are all effective use of taxpayers’ money. People who’ve done thousands of home visits, albeit as unregistered dementia care workers, including carers and other careworkers, or even people living with dementia, will have qualms about people without any specialist training themselves of dementia raising dementia awareness.

We do need an honest debate about how effective these initiatives are, especially in relation to the ‘getting most of your buck’ idea. The system is open to abuse, with powerful people getting more powerful, as a result of who you can get to deliver  your package fast and at the most competitive price.

But there’s scope to be positive.

Certainly not criticising the movement, thought it might be helpful to share gaps in intentions & use @IanMcCreath @SteveMilton1 @legalaware

But this has been an all too predictable consequence of a particular approach which has been festering in England here for many years now.